Obama's criticisms of the Warren and Burger courts

Why is the president echoing the right-wing/Limbaughian view that past court's decisions were liberal power grabs? 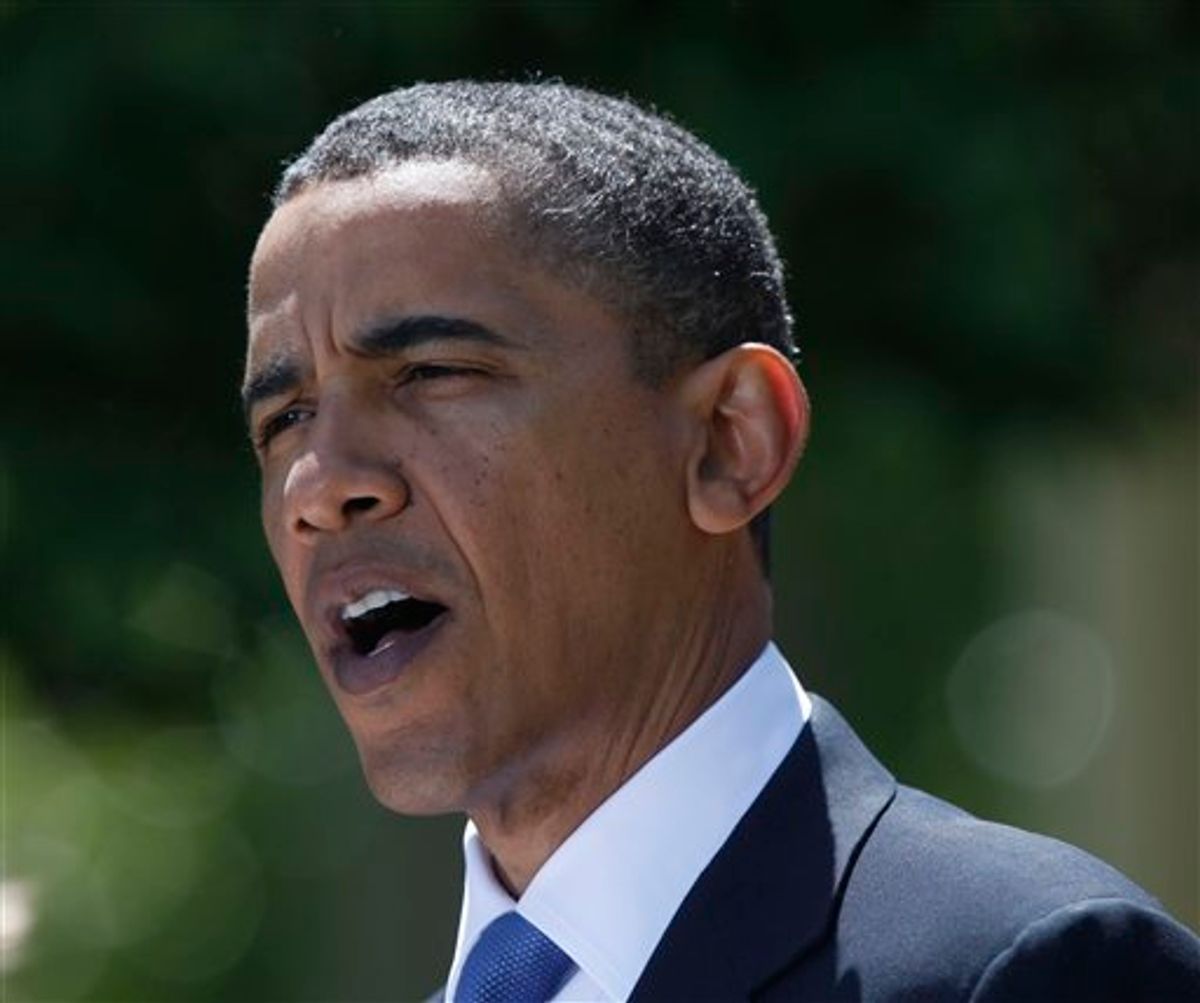 Yesterday I wrote about what seemed to be President Obama's fairly stunning disparagement of the Warren and Burger Courts (expressed on the eve of naming Justice Stevens' replacement), as he echoed the classic, decades-old, right-wing claim that those courts were guilty of the "error" of "judicial activism."  As I noted in an update, numerous people, in comments and via email, objected that I had misinterpreted Obama's remarks, that he was merely noting the hypocrisy of the Right but not himself criticizing those courts.  As it turns out, The New York Times' Charlie Savage and Sheryl Gay Stolberg understood his remarks exactly as I did, as did the experts on both sides of the spectrum they interviewed, and the White House itself seemed to confirm that this is exactly what Obama intended to convey:

In a seeming rejection of liberal orthodoxy, President Obama has spoken disparagingly about liberal victories before the Supreme Court in the 1960s and 1970s -- suggesting that justices made the "error" of overstepping their bounds and trampling on the role of elected officials. . . .

Mr. Obama’s comments, which came as he prepares to make a Supreme Court nomination, amounted to the most sympathetic statement by a sitting Democratic president about the conservative view that the Warren and Burger courts — which expanded criminal defendant rights, required busing to desegregate schools and declared a right to abortion — were dominated by "liberal judicial activists" whose rulings were dubious. . . .

Several conservatives said they welcomed an acknowledgment by a Democratic president that the courts led by Chief Justices Earl Warren and Warren Burger had sometimes overstepped their role.

I bet they did welcome it.  Now, there's nothing sacrosanct about those courts, and there's nothing per se wrong with criticizing them.  But given that the defining rulings of those decades have long formed the bedrock of the progressive understanding of the Constitution and the judiciary, that the dominant Justices of that era (Brennan, Marshall, Douglas, Black) are the iconic liberal judges of the 20th century, and that those decades produced the most vital safeguards for core Constitutional guarantees and critical limits on executive power, Obama -- as I said yesterday -- should at least specify which decisions he finds "erroneous" and illegitimate.  But the imperial decree has been issued and that's apparently all you need to know:

The absolute dumbest political platitude in the vast canon of right-wing idiocies has long been the premise that courts act improperly -- are engaged in "judicial activism" -- whenever they declare a democratically enacted law invalid on the ground that it is unconstitutional.  That's one of the central functions of the courts, a linchpin of how our Constitutional Republic operates.  We're not a pure democracy precisely because there are limits on what democratic majorities are permitted to do, and those limits are set forth in the Constitution, which courts have the responsibility to interpret and apply.  When judges strike down laws because they violate Constitutional guarantees, that's not a subversion of our political system; it's a vindication, a crucial safeguarding of it.

But now, here is Obama giving credence to that idiocy with his sweeping, unspecified condemnation of the Warren and Burger Courts as "judicial activists."  If, as Obama argues, some (or many) of the decisions of that era are "errors" of activist overreaching, wouldn't the current Court be justified in reversing them?  And won't Republican Senators be justified in demanding that Obama refrain from nominating to the Court anyone whose records seems compatible with the defining judicial approach of those courts (since, after all, even Obama acknowledges they were in "error")?  Why is Barack Obama walking around echoing the right-wing/Limbaughian view that the Supreme Court's decisions of the 1960s and 1970s were illegitimate, anti-democratic power grabs?

It's one thing to argue, as Obama has previously, that it sometimes makes more sense to accomplish political goals democratically rather than through the courts, and that liberals in the past have been too reliant on judicial victories in lieu of persuasion and organizing.  As a general strategic proposition, I don't disagree with that view.  But that has nothing to do with the proper role of judges, which is to strike down any and all laws brought before them which violate the Constitution.  That core principle is the one Obama is disparaging.

In their NYT article this morning, Savage and Stolberg suggest that Obama may be motivated by a desire to protect progressive legislation from being struck down by the Roberts Court (as they did in Citizens United):

John McGinnis, a conservative law professor at Northwestern University, said, "[Obama's] party is in control, so of course he wants deference" to legislation enacted by Congress in the current era.

That's a fair enough objective, but demanding judicial deference to democratically elected laws is incredibly short-sighted and destructive.  As Bush critics tried (unsuccessfully) to explain to the Right throughout the last decade, the party in power doesn't stay in power forever.  Principles that you endorse and powers you vest when your party is in control don't disappear once the other party takes control, as it inevitably will.  The changes one party makes to our political system endure once the other party takes control.

Publicly discrediting the core judicial function may serve Obama's short-term political goals by deterring the Roberts Court from striking down laws enacted by the current Congress or actions he takes as President.  It may win him a day's worth of plaudits from right-wing legal ideologues.  But it also further entrenches the right-wing myth that judges act illegitimately when they strike down democratically elected statutes or "interfere" in executive actions.  That won't apply only when it comes time to examine Obama's domestic legislation, but also when it comes time to adjudicate the next Military Commissions Act, or the next oppressive anti-gay referenda, or future efforts to restrict Internet content, or twisted (but democratically-enacted) abortion laws, or government programs to spy on Americans without warrants, or the latest police state expansion of the type just enacted in Arizona, or whatever else the next GOP majority is able to implement.  The basis for constitutionally challenging such acts is found in the jurisprudence that Obama just demeaned.

The prime attitude of the Bush administration towards courts was that they had no business interfering with whatever the Executive branch and the GOP Congress decided to do.  It's unsurprising that Obama is now echoing that same perspective, but that doesn't mean it's harmless.  There are ongoing, very live disputes over the proper role of the courts, and Obama, intentionally or otherwise, just bolstered the right-wing arguments in those debates by embracing long-standing cartoons of the Warren and Burger Courts.

UPDATE:  With regard to the other topic here from yesterday -- the Obama DOJ's issuance of a supboena to Jim Risen -- see this Washington Post article headlined "After reporter's subpoena, critics call Obama's leak-plugging efforts Bush-like."  The article, by Howard Kurtz, explains that the subpoena "has convinced some press advocates that President Obama's team is pursuing leaks with the same fervor as the Bush administration" and includes this:

"The message they are sending to everyone is, 'You leak to the media, we will get you,' " said Lucy Dalglish, executive director of the Reporters Committee for Freedom of the Press. In the wake of the Bush administration's aggressive stance toward the press, she said, "as far as I can tell there is absolutely no difference, and the Obama administration seems to be paying more attention to it. This is going to get nasty."

It was once the case, not all that long ago, that those who pointed out the extreme similarities between the Obama and Bush administrations in these areas were accused of being hysterical, impetuous purists.  It's now the case that those who do so are guilty of nothing more than stating the obvious.

UPDATE II:  For all you libertarians appearing in the comment section to defend Obama's comments because you don't like Roe and Brown v. The Bd. of Education: I seriously doubt that those are the decisions he had in mind when criticizing "judicial activism."  Obama has long self-identified as pro-choice and a defender of Roe, and I would be quite astonished if he had Brown and its progeny in mind when criticizing the Court.  Obama's failure and subsequent refusal to specify the decisions he thinks are illegitimate make it impossible to know for certain, but it's unlikely in the extreme that he intended to question the validity of reproductive right and desegregation rulings.

That said, the fact that people who hate Roe and Brown are identifying so strongly with Obama's views about the Supreme Court illustrate the real point here.

Protect Whistleblowers: Often the best source of information about waste, fraud, and abuse in government is an existing government employee committed to public integrity and willing to speak out. Such acts of courage and patriotism, which can sometimes save lives and often save taxpayer dollars, should be encouraged rather than stifled.

Who knew that the way to "protect" and "encourage" these "courageous patriots" would be by issuing subpoenas to uncover their identity and then criminally prosecuting them?

Meanwhile, Greg Sargent argues that these attacks on the Warren and Burger courts are typical Obama.