How the Web is changing the way we eat

A restaurant chain shrinks plate size to appeal to the social networking crowd. Is this the way of the future? 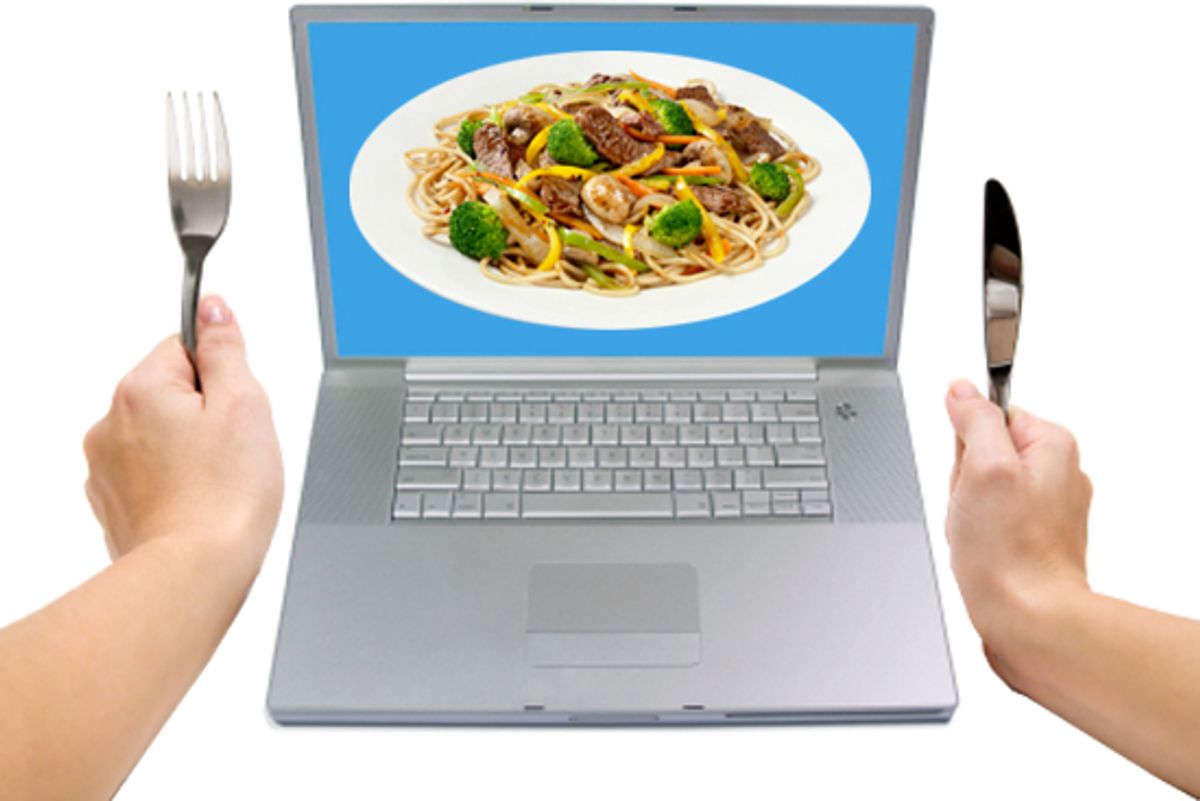 Every now and then, a trend takes a mysterious turn. Here we are, in the midst of an era in which portion sizes have been growing steadily for decades, and suddenly, small plates are making a comeback. As USA Today writer Bruce Horovitz pointed out last week, bite-size menu options are a hot new thing at casual chain restaurants like California Pizza Kitchen and Houlihan's. Of course, small plates are a concession to budget-conscious eaters and possibly an attempt at a more upscale feel, but in a surprising twist, Bob Hartnett, CEO of Houlihan's, claims that the change is specially targeted at younger, Web-savvy customers. Small plates, he explains, are for diners who are "just as comfortable sharing a plate of food as they are sharing social media."

And there is even some scientific proof to back up his theory. A study of Internet use and eating habits in Korean teenagers showed that the people who used the Web most tended to eat smaller meals. Out of the entire study, which compared light, moderate and heavy levels of "Internet addiction," the heavy users were the only group in which reduced meal size was a more prevalent trend than unchanged or increased meal size -- all of which raises an intriguing question. We've spent plenty of time discussing how the Internet is changing the way we read, the way we communicate, and the way we fall in love and break up, but how is the Internet changing the way we eat?

For better or worse, social media-style sharing is now part of our cultural zeitgeist -- "liking," tweeting, describing and evaluating all our tedious comings and goings -- and, undoubtedly, this has also changed the way we experience and react to food. For the Web-obsessed, eating is no longer just about privately savoring a meal. It's about Yelping and blogging, and, as the New York Times recently explored, taking pictures of our food and posting them online. Increasingly, our meals are plugged in to the broader social experience of eating, an ongoing conversation about millions of meals like ours.

In that context, it makes sense that younger diners might be forgoing individual meals in favor of passing around a slew of small plates. Consider it the dining equivalent of updating your Facebook status: Sara Breselor is having Houlihan's Disco Fries and they're not quite what she had hoped for. A trail of comments follows (but the pickle fries ROCK!!! Ah yes, Sara Breselor and three others like this). And so on.

"I think it mimics the fragmentation of information," says Dan Zarrella, Web marketing specialist and author of "The Social Media Marketing Handbook." Whereas many people used to rely on one or two good sources of news and information, they now check 20 different websites. "People have grown up with this idea that it's not just about one key thing, it's about a lot of different things together," Zarrella says. "I could see how eating behavior could mirror that preference."

Much has been made of the idea that the Internet has ruined our ability to focus on large, sustained ideas, books and long articles, and perhaps a trend toward little servings reflects our anxiety about decision-making in an information-saturated world. Committing to a single choice is much more difficult when your consciousness is so crowded by possible options. Even in a restaurant, where there are a finite number of choices, the same anxiety kicks in. The pear and arugula salad looks great, but what if the roasted beets are better?

Perhaps this is why the new "small plates" menus are full of "combo" options that let diners cover a lot more ground than they could with a single full-size serving. Houlihan's, for example, has a new menu of mini desserts, and they offer the option of ordering "any five" desserts for $12.99. But there are only five options on the mini menu, so opting for the combo means ordering all of them, and thus getting to enjoy dessert without the anxiety of having to choose just one of them. (Then again, maybe it's just an attempt to make more money by upsizing the order.)

Of course, the Web is already having a huge effect on restaurant trends. Sites like Yelp can tangibly impact a restaurant's success, and the people who are influential on Yelp are outgoing, entertaining and highly connected. Which means that restaurant trends are being guided less by lovers of food and more by lovers of interaction. "I have a bunch of followers on Twitter, because I like people and I like making friends on Twitter," Zarrella says. "So if I talk about a restaurant, there's a very good chance that I like it because it feeds into the social need that I have." He says that the person who is most influential on social media "is not necessarily going to be judging restaurants by their culinary merits, but they'll be judging restaurants based on a social experience."

And one thing is clear: In the future, the online world will be far more closely integrated into our everyday experience of eating. "One big technology shift that's happening, and that I think is going to be very important to restaurants, is the blending of offline and online," Zarrella says. We’re already seeing this in what Zarrella calls "augmented reality," things like the Yelp application for smart phones, which allows users strolling city streets to take a picture of a restaurant and instantly call up hundreds of its reviews.

This is the kind of Internet-mediated interaction that is likely to define restaurant culture in the near future. Zarrella himself recently experienced a dramatic example of how social media can change the interaction between restaurants and customers. A self-professed "beer nerd," Zarrella went to a bar in Boston, where, he says, "There are these two really rare beers on the menu. One of them was sold out, so I got the other one. I was so excited about it that I took a picture of the beer and I posted it to Twitter, saying, 'this is my new favorite place!'" he says.

Then, the hand of the virtual reached out and brushed against the real. "The bartender saw the tweet," Zarrella says. "He had just finished his shift. And it turns out, the other beer that I had wanted to try -- the one that was sold out -- he had bought it, and was splitting it with his friend at the next table over. So he was like, 'I liked your tweet, thanks a lot for that,' and he gave me a glass of the really rare beer."