A new commercial smears Bradley Byrne for (gasp!) supporting evolution. And guess who helped pay for it? 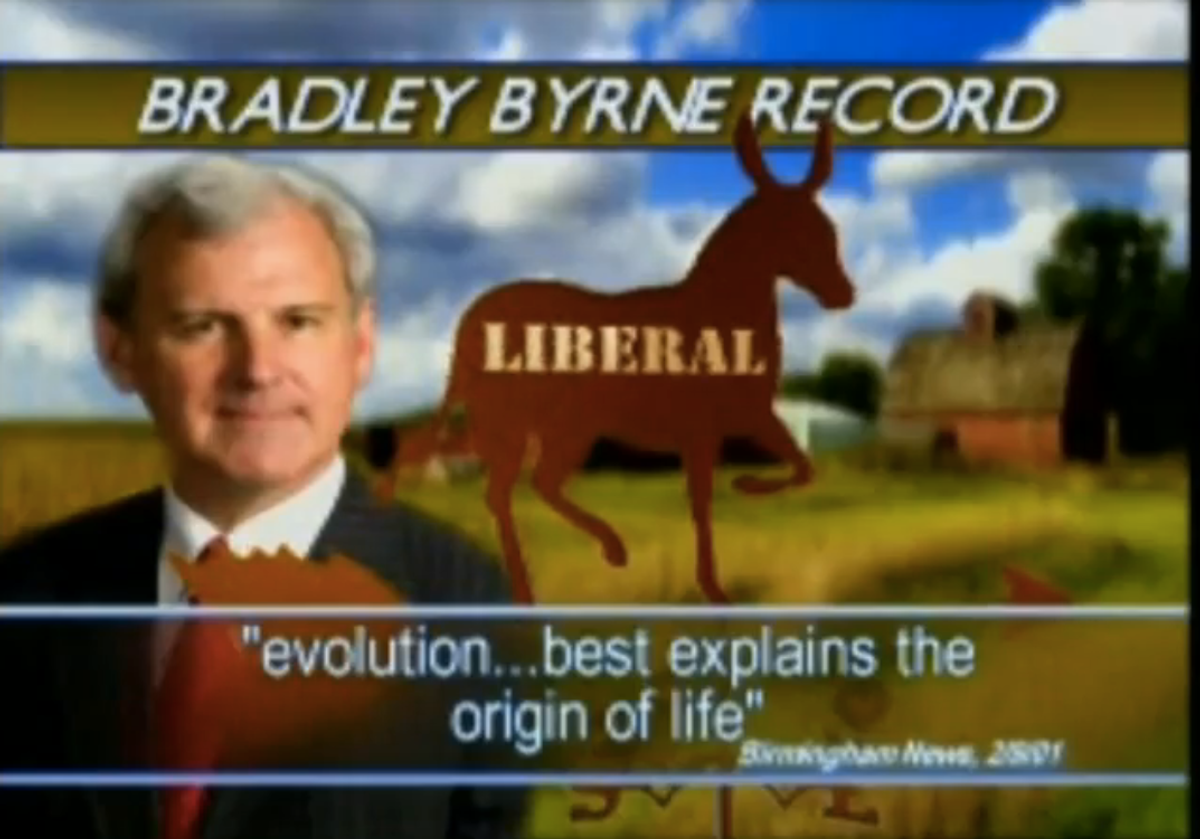 The outcome of Alabama's gubernatorial race is still up in the air, but the contest itself is shaping up to be the most entertaining show on TV. Last month, candidate Tim James explained that this is the state where "we speak English." Now, a new campaign ad takes Republican candidate Bradley Byrne to task because "on the school board Byrne supported teaching evolution, said evolution best explains the origin of life – even recently said the Bible is only partially true." This news, by the way, is delivered in an incredulous, "Can you believe this guy?" tone.

Yes, evolution. Being open to possibility of allegory. And in the 21st century, no less! Now, in some parts of the world, a candidate's response to such scurrilous attacks might be something along the lines of, "Screw you, mouth breathers." Instead, Byrne has gone on the defensive, stating that his remarks at a Piggly Wiggly appearance last November ("I believe there are parts of the Bible that are meant to be literally true and parts that are not") were taken out of context. On his website he's quick to insist, "I believe the Bible is the Word of God and that every single word of it is true" and that, "As a member of the Alabama Board of Education, the record clearly shows that I fought to ensure the teaching of creationism in our school text books."

I'd say that if Byrne, a staunchly anti-abortion, pro-traditional marriage Christian, has ever eaten meat from a pig, he's got some explaining to do to God, then. And I wonder if, when he reads in Psalms, "He set the earth on its foundations; it can never be moved," he just forgets that whole "rotating on its axis while circling the sun" thing. Because every word is true! Literally!

You might wonder what kind of extreme anti-Byrne nuts would go to such trouble to paint him as a Bible-disputing, evolution-loving maverick. Funny you should ask – the ad was paid for by True Republican PAC of Linden, which has received a cool $500,000 in funding from The Alabama Education Association.

In short, an educational association is paying for ads blasting a conservative Christian who says he's fought to teach creationism and insists every word of the Bible is factually accurate -- for not being dogmatic enough. Oh, Alabama, you're a hoot.

The best part of all this is that the election itself is still nearly six months away. So much time, so many crazy ads yet to run. We can't wait to see what happens as we get closer to decision day -- and the real mud-slinging starts.