When the chef is psycho, what's a customer to do?

A writer gets tossed out of a restaurant after standing up for a berated server, but I'm not sure he was a hero 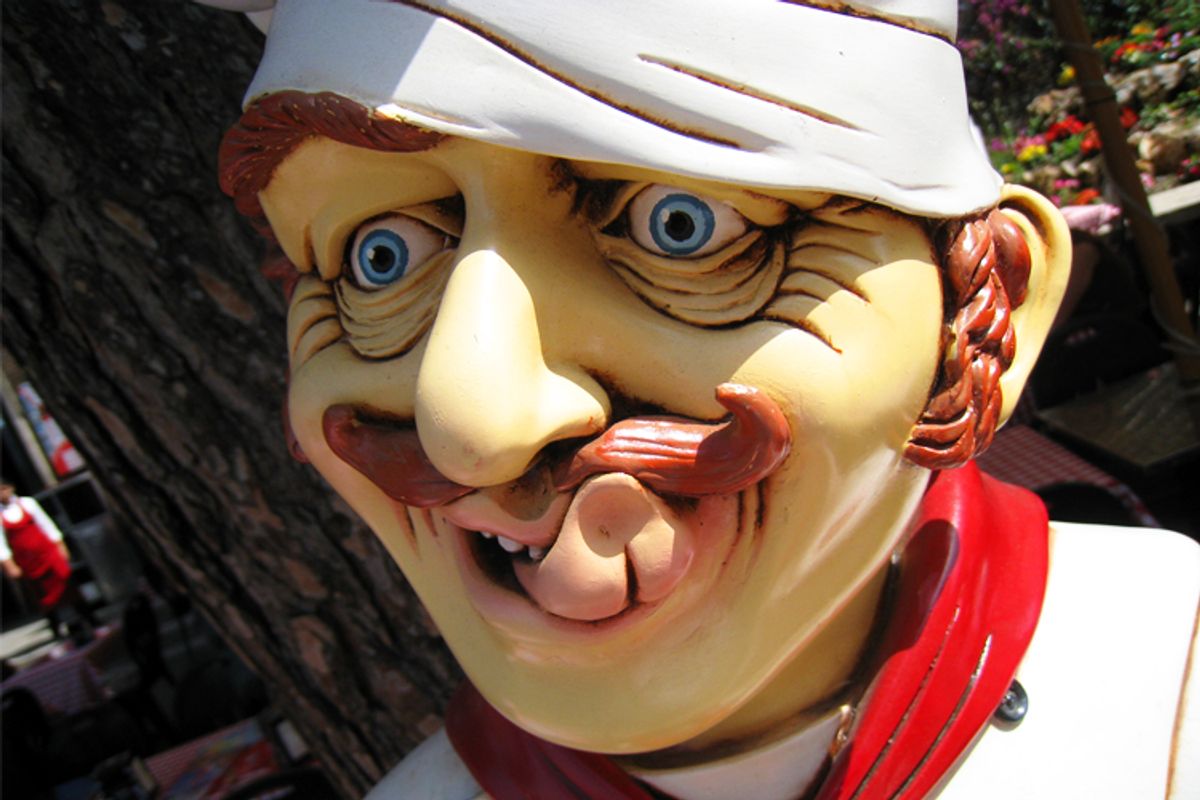 It really isn't often you get edge-of-your-seat drama on a food blog, so I was titillated yesterday by a story in the New York Times' Diner's Journal by financial writer Ron Lieber about getting thrown out of a restaurant by its apparently psychotic chef, Marc Forgione, after standing up to the kitchen maniac and defending a server he was haranguing. I've worked with some screamers in my cooking career, and while I understand how crazy pressure gets in the heat of service, I have little sympathy for dealers of that kind of abuse. (For a cook getting creamed by a full rack of order tickets, plenty of abuse already comes from within.) But I was surprised by how much I found my sympathies shifting from the writer to the chef as I read the woeful tale.

The story, in short: Lieber went out to dinner with some friends Saturday night. Not long after sitting down, the Gates of Hell yawned open, and amid the stench of fire and brimstone and pan-roasted duck breast, Forgione, or maybe Satan himself, started yelling, "loud, sustained, top-of-lungs yelling," at one of the servers, "in full view of many of the customers. The dining room quieted as patrons exchanged uncomfortable glances." You would exchange an uncomfortable glance, too, if Beelzebub was pitchforking the poor guy holding your roasted beet salad.

After a few more rounds of listening to this poor waiter get reamed out, Lieber had enough. "Listening to [Forgione] in action conjured up the particular type of nausea that results from watching people yank their misbehaving kids around on the subway or seeing my own kid smash a defenseless insect." So he sprung into action: "I pushed back my chair and walked through the open doorway of the kitchen ... I told the chef that his behavior was making me and others uncomfortable. I let him know that I thought it was mean. And I asked him to cut it out." And instead of being rewarded with an apology and maybe a dessert on the house, the chef commanded him out of the restaurant entirely.

To this point, I was all-in for Lieber, standing up to this petty bully. And I admire him even more as a journalist, and as a person, for calling Forgione the next day and writing the chef's recollection of what happened, too.

"First and foremost, you came into my kitchen and spoke to me very disrespectfully in front of my cooks," he said. "The kitchen is a sacred space." He told me that my reply to his attempts to explain why he was yelling, while I was in the kitchen was, "We're not interested." … That wasn't what got us kicked out though, according to Mr. Forgione. He claimed that he didn't decide to ask us to leave until he explained to us tableside that his yelling was all in the interest of making everything perfect. "Well you aren't," he remembers me saying. "And then," he continued, "you waved a hand in my direction as if I was an annoying bug. Someone who acts like that in my restaurant, I would never serve."

I was initially even more annoyed with Forgione after reading this: "The kitchen is a sacred space" is just a douchey thing to say, especially since here it sounded like code for "I am King of My Castle! Pffft!"

But still, something started to sit badly with me about the situation, and I finally realized what: it's that after this exchange, Lieber sat back down at his table and expected to be served dinner.

To express his displeasure, Lieber could have sent a message with a manager or a server to the chef, something that could be handled discreetly. But walking into the kitchen himself -- sacred space or not -- was totally transgressive, an aggressive move. In the social hierarchy of commerce, the customer is king, and when the king comes into the duchy and tells the chef off in front of his cooks, that creates an unsustainable power dynamic in the kitchen. Making the chef eat humble pie like that has consequences: he has to live -- and work -- with undermined credibility. Which may be fine if Lieber was really just playing the role of the grown-up dressing down a schoolyard bully, but then the right thing to do was to leave the restaurant, to take his business elsewhere. That would have said, "Look, I'm not telling you off as a customer, I'm telling you off as a person who's pissed you're bullying this waiter." It would have been a conversation among equals.

But in sitting back down at his table, waiting for the chef to prepare his dinner, Lieber sent a message of both indignation and entitlement. He was, essentially, telling the chef, "I just humiliated you, and you still have to cook for me." At that point, he was lording his own position over Forgione. At that point, Lieber became the bully, and, from that view, who can blame Forgione for asking him to leave?

I recall what the chef said about approaching Lieber's table to continue the conversation, and Lieber dismissing him with a gesture of the hand: "Someone who acts like that, I would never serve." In the interest of universal justice and harmony, I'd hope that Forgione would consider that notion when he degrades his own employees. And maybe then, we could say Lieber did a good thing.