Banking reform surprise: Not gutted yet

In a virtuoso display of moderate, incremental progress, the Dodd bill lumbers toward a vote 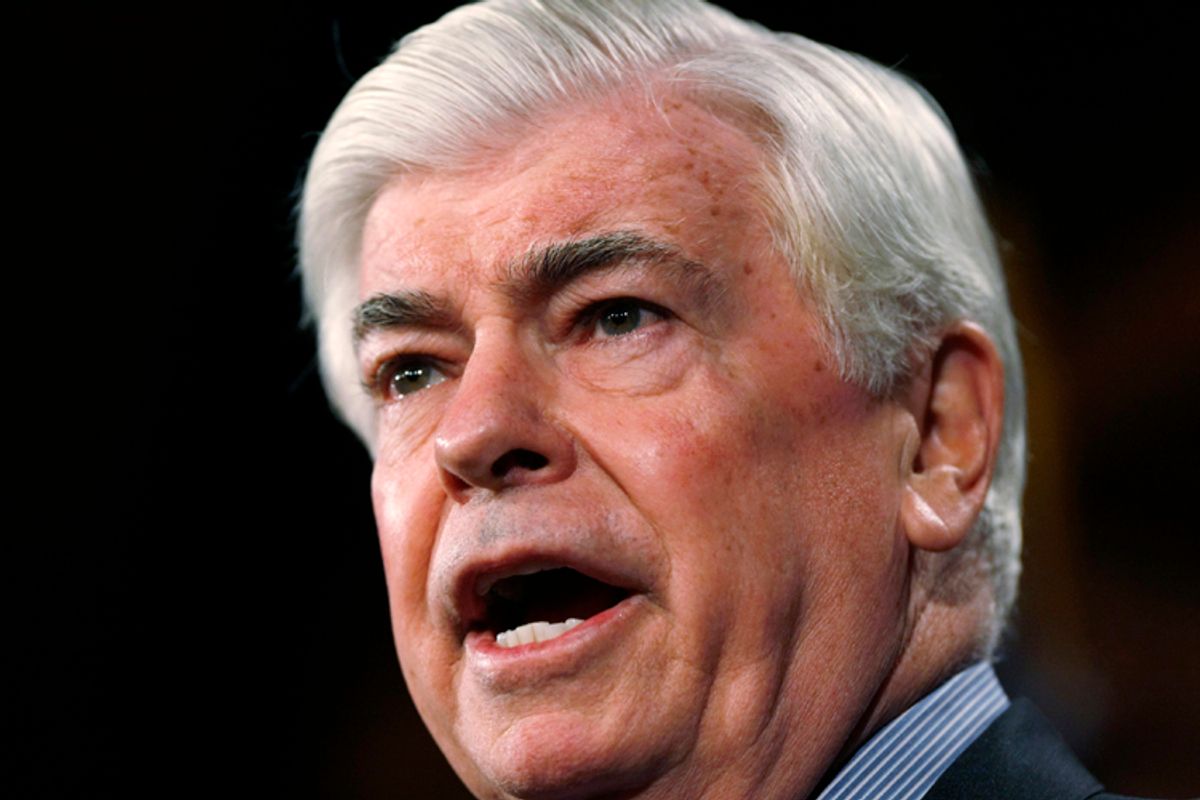 The most surprising news about banking reform's progress through the Senate is that Sen. Blanche Lincoln's proposal to strip derivatives trading from the big banks is still intact. Excising that provision is now the top priority for banking lobbyists, but so far they've made no apparent headway. On Wednesday, an amendment designed to do Wall Street's bidding, sponsored by Sen. Saxby Chambliss, R.-Ga., went down to defeat. A final vote could happen as early as next week, raising at least the possibility that the Dodd bill might have a significant impact on how JP Morgan Chase et al. do business.

But something else is scheduled for next week -- Sen. Blanche Lincoln's Arkansas primary, in which she has been challenged from the left by state Attorney General Bill Halter. According to a story by Carrie Budoff-Brown in Politico, Senate Democrats may be holding off any action to weaken the derivatives language until after Tuesday's primary.

Trying to shore up her left flank, Lincoln went further than the White House, the House and the Senate Banking Committee to crack down on derivatives, the complex financial instruments at the heart of the 2008 economic crisis.

And Lincoln's in no mood to compromise just days before her May 18 primary. So Democratic leaders have held back from going too far to force changes in her bill and risk embarrassing Lincoln ahead of the vote, according to multiple Senate aides and industry officials familiar with the negotiations.

But with the White House and former Federal Reserve Chairman Paul Volcker both arguing that Lincoln's derivatives regulation goes too far, the conventional wisdom expects a deal that will ease Wall Street's fears to be made, either next week, before a final vote, or in conference when the House and Senate attempt to reconcile the language of their reform bills (in the event that the Senate ends up passing the Dodd bill.)

There are reasons to be cheerful about how the bill is surviving the grinding amendment process. Republican efforts to weaken consumer protection and derivatives regulation have been beaten back, and one could make an argument that the majority of amendments that have passed have actually strengthened the bill. Just this morning, an amendment proposed by Sen Al Franken that would shift responsibility for initial ratings of securities from the credit rating agencies to the SEC passed 64-35. But there is still no guarantee that the final outcome will be strong enough to fix what ails Wall Street.

The only real guarantee is that the bill won't veer into radical territory on the right or the left. Which, strange to say, is testimony to Dodd's masterful leadership. Attempts to gut the bill are getting beaten back, along with attempts to upgrade the bill into industrial strength. So on the one hand, an aggressive -- and likely disastrous -- Republican attempt to unwind Fannie Mae and Freddie Mac -- which between them guarantee 97 percent of U.S. home mortgages -- failed to pass, but so did a Democratic effort to mandate that too-big-to-fail banks be broken up. And after some adroit maneuvering, the most radical amendment that had a real shot at passing -- Sen. Bernie Sanders "Audit the Fed" amendment -- was substantially watered down into an "Audit the Fed just once" amendment.

So that's the basic picture: Conservative GOP efforts to derail the bill are failing, as a handful of moderate Republicans consistently side with Democrats. Progressive attempts to supercharge the bill are going nowhere, beaten down by sizable majorities. But incremental, sensible improvements targeting abuses in such areas as the mortgage lending and credit ratings businesses, or requiring more transparency from the Fed, are passing. So far, in sum, the bill appears to be improving as the process plays out. That's not necessarily how Congress usually works, so I guess it's something to be happy about.

But then, there's always next week.