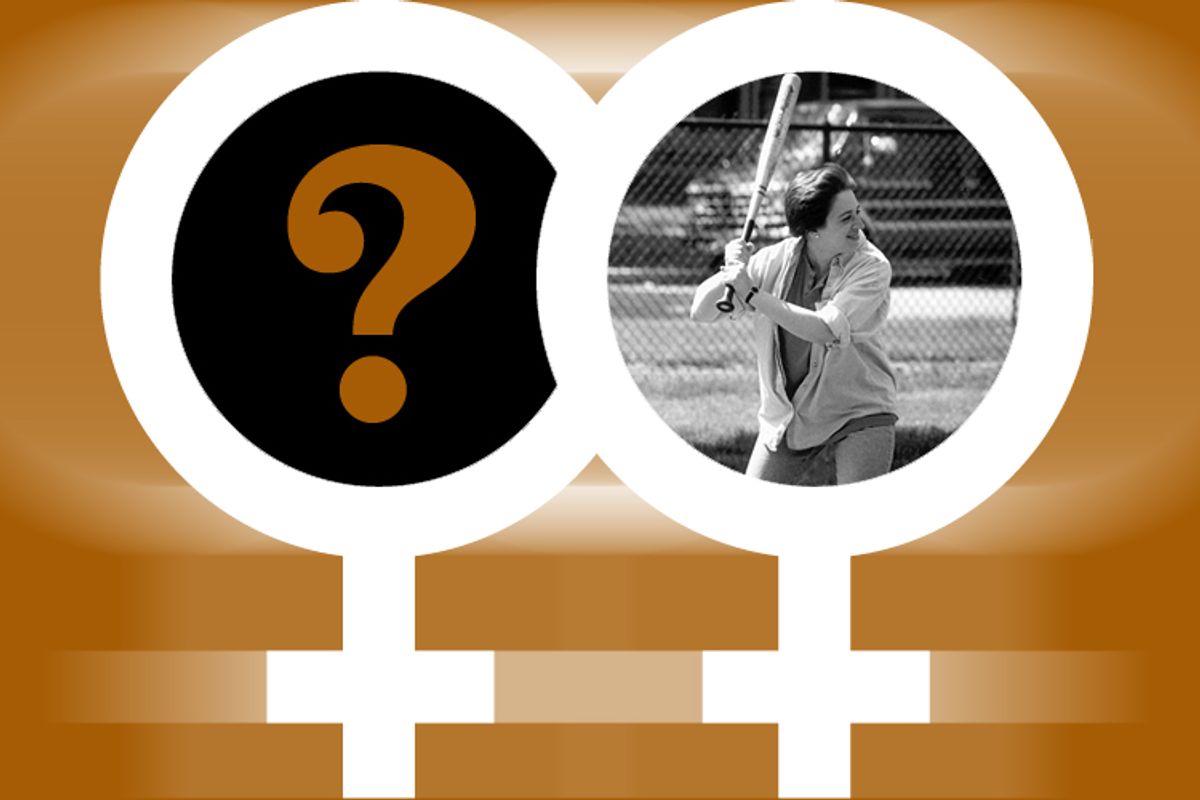 When the Wall Street Journal ran a 17-year-old photograph of Supreme Court nominee Elena Kagan playing softball on its cover earlier this week, the headline read, "Court Nominee Comes to Plate," but the subtext, apparently, was "This Chick is Super Gay."

Ladies, it's true: If there are any photographs out there of you running on a field, dribbling a basketball, or God forbid, standing on a golf green, prepare to have your sexuality open to dispute. Just look what happened to Kagan – as soon as that image of her wearing sneakers and comfortable pants hit the front page of the Murdoch-owned Journal, the accusations of  thinly veiled outing began.

Former Gay and Lesbian Alliance Against Defamation spokesperson Cathy Renna, unfooled by the innocent "comes to plate" headline, said on Politico.com that, "It clearly is an allusion to her being gay. It's just too easy a punch line."  And John Wright, a writer for the gay and lesbian publication Dallas Voice said, "Personally I think the newspaper, which happens to have the largest circulation of any in the U.S., might as well have gone with a headline that said, 'Lesbian or switch-hitter?'"

It's not the first time that gay rumors have followed the successful, unwed Kagan, but this may be the first time the press has tried to prove evidence of lesbianism via athletic prowess. As another Murdoch enterprise, the New York Post, explained Thursday, softball "is to gay women what stickball is to Brooklyn." Yes, it's a scientific fact -- lesbians love softball like lesbians love folk festivals.

Let's put aside the question of whether or not the Journal was indeed working in a sly dig at Kagan -- a charge the paper dismisses as "absurd." The bigger question is: Why, in the year 2010, is the notion of a woman playing sports still considered a dis? Because gay or straight, the implication is that real women -- feminine, socially appropriate women -- wouldn’t be caught doing anything as butch as playing softball.

I live across the street from a park that has six baseball diamonds and have yet to see a girl on the mound, ever. So last year, I enrolled my elder daughter in a baseball clinic further downtown. This year, she signed up for her school's coed basketball league. My daughters have to work harder to seek out athletic opportunities -- especially ones that fall outside the bounds of traditionally feminine activities -- but they don't yet grasp that there's any stigma attached to them. They just know that they really, really like to win, more than they like skating in short dresses. And everything they get out of playing and watching sports now is shaping them into the women they will soon become.

But the double bind for ambitious females is that there's always somebody eager to put you down. Read the comments on some of the stories about Elena Kagan – about what an "ugly" "lesbo" she is. And yet, had she been a former beauty queen who'd spent her youth working the pageant circuit, she'd be accused of bimbo-dom. You're either too masculine or too girly, too tough or too soft. When in doubt, you're a big old dyke. I mean, what else could anyone possibly assume from the fact that you played a softball game in 1993?

Speaking to Politico, Cathy Renna asked, "Have you ever seen a picture of Clarence Thomas bowling?" Not yet, but I've seen loads of photos of Barack Obama playing basketball, and I don't remember anybody ever suggesting that a depiction of the commander in chief playing sports was somehow insulting. And you know, if someday my daughter were a Supreme Court nominee and a newspaper ran a photo of her -- young, smiling and engaged in athletic competition -- I wouldn't want to question how that was being used against her. I would hope instead to be stoked out of my mind. I would hope others would feel likewise. Because whatever the Journal's intention, whatever the mainstream media's interpretation, when I look at Elena Kagan competently, confidently swinging a bat, I don't think, "Whoa, that mannish creature is obviously unfit for the highest court in the land." I just think, "That woman kicks ass."