GOP budget-cutting gimmick turns out to be popular

More than 70,000 people voted on the first day of Eric Cantor's attempt to rein in a minuscule share of spending 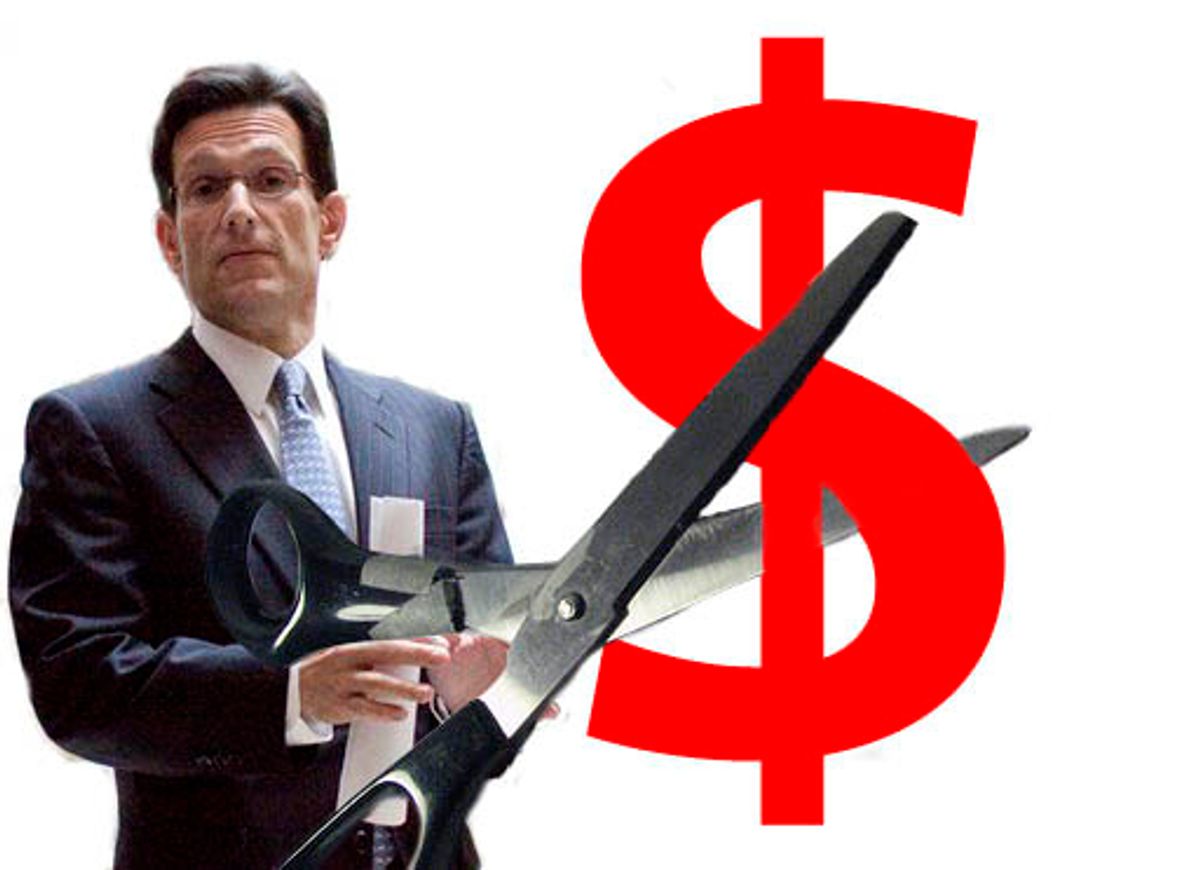 Not because it's actually reined in federal spending; that's not really the point, since House Republicans don't have the power to do that, and since even if every one of the programs Cantor put up for a vote was zeroed out, the federal budget would only shrink by .16 percent. And Cantor only wants to try to take out one of the five programs people can vote on this week, anyway. (UPDATE: Cantor's office points out, correctly, that the GOP could cut the spending if enough Democrats joined with them; I didn't mean to imply they couldn't force a vote, which they can. But it's unlikely they'll actually win it. And even if they did, the Democratic-run Senate -- which can rarely be roused to pass any legislation these days -- would have to go along with it.)

No, YouCut is a success because -- on its first day -- 70,000 people voted on which program they'd like to see eliminated. Which means the House GOP got either their e-mail addresses or (even more valuable) their cell phone numbers, if they voted by text message. Which might come in handy if, say, elections happen to be scheduled for November. Which, come to think of it, they are!

"The YouCut initiative is just beginning," Cantor said in a statement Thursday. "If you haven’t voted yet, you still have until Monday to vote on the first series of cuts before the first winning cut is announced. For those of you who have voted so far, we are very grateful. You are making a difference."

Sure, people may have mocked the proposal for its grandiose claims and minuscule actual cuts. But the information the GOP captures when people click on YouCut means Cantor will have the last laugh, even if voters merely think Republicans are more serious than they actually are on cutting the budget.

As for which program gets the most votes this week, it's hard to predict. They all sound quite nefarious and undeserving in Cantor's telling. The item described as "taxpayer subsidized union activities" is likely to infuriate any good Glenn Beck-watching voter, and it would save $600 million. (If, that is, Republicans could actually cut it.) Then again, saving $2.6 billion by cutting what Cantor calls a "new non-reformed welfare program" might have its appeal, too. Interestingly, the GOP has proposed to put the presidential election fund on the chopping block, to save $260 million -- even though John McCain relied on the federal largesse in 2008.