Will anger be enough to deal with BP oil spill?

President Obama scolds BP, but neither the oil company nor the government is measuring the real size of the leak 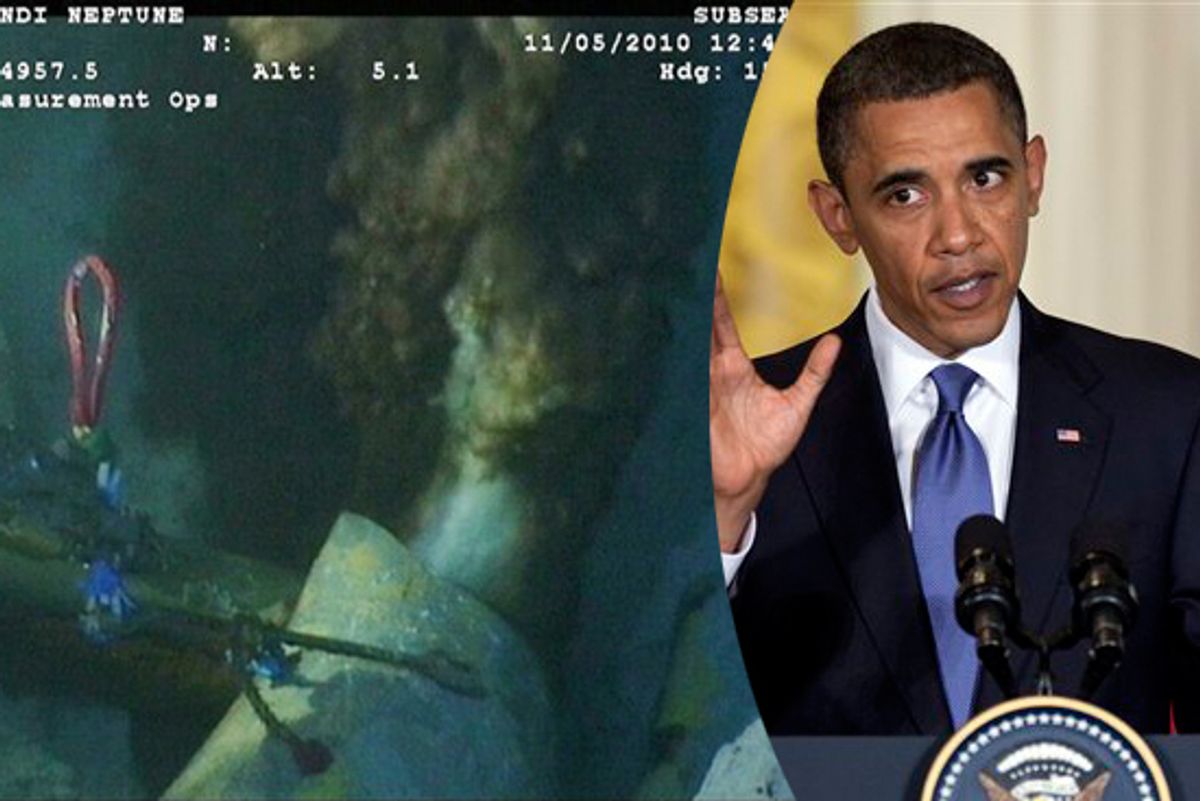 In this photo made from video taken by BP PLC on Tuesday, May 11, 2010, oil leaks into the Gulf of Mexico from the end of the pipe that was supposed to pump oil from the sea floor before the Deepwater Horizon oil rig exploded and sunk last month. Right: President Obama.
--

Being president of the United States doesn't exactly lend itself to spontaneous displays of emotion, so the White House telegraphed in advance the scolding President Obama just gave BP, the entire oil industry and the pliant federal agency that pretends to regulate offshore drilling over the still ongoing BP oil leak in the Gulf of Mexico.

"I did not appreciate what I considered to be a ridiculous spectacle during the congressional hearings into this matter," Obama said, accusing BP, Halliburton and Transocean -- the corporations responsible for, and who stood to make enormous sums of money from, the Deepwater Horizon oil rig before it exploded -- of "falling all over each other" to escape blame for the disaster. "It is pretty clear that the system failed, and it failed badly, and for that, there's enough responsibility to go around."

Some of that blame, Obama acknowledged, has to go to the federal government. For years, the Minerals Management Service has meekly accepted more or less whatever Big Oil told it about the safety of offshore rigs. The New York Times reported Friday that the agency had overruled its own staff scientists and awarded offshore drilling permits to BP and other corporations without first getting input from the National Oceanic and Atmospheric Administration about how the oil exploration might affect nearby sea life. The administration announced Friday it would review compliance with the relevant laws -- something MMS has apparently decided not to bother with in recent years. And Obama once again pushed to split the agency in two parts, one that collects royalty payments for drilling, and another that actually oversees the offshore operations. The current system means the agency depends on the industry it regulates for its revenue.

"For too long -- for a decade or more -- there's been a cozy relationship between the oil companies and the federal agency that permits them to drill," Obama said. "We will trust, but we will verify."

But one basic fact about the spill that still needs verification is exactly how much oil BP's little project is spewing into the Gulf every day. When the rig first collapsed, BP declared it was basically a nuisance spill. Then the government took a look at satellite photos of the spill, and bumped the estimate up to 5,000 barrels a day -- or 210,000 gallons. Now some outside experts say the real total could be as much as 70,000 barrels, which would translate to 2.9 million gallons flowing into the Gulf of Mexico each day.

For some reason, though, neither BP nor the federal government seems interested in figuring that out. BP's desire for privacy is nothing new; the company has tried to keep as much of the spill site and the cleanup operation under wraps as possible, and officials keep insisting that measuring the spill is impossible anyway (so why try?). The government seems like a different story, though. "Having greater precision about the flow rate would not really help in any way," NOAA administrator Jane Lubchenco told the Times. When I asked White House officials whether getting a better estimate of the oil leak would be helpful, they directed me to remarks by the Coast Guard commandant, Adm. Thad Allen, who brushed off questions about that issue. "We're attacking it as if it were a much larger spill, anyway," Allen told reporters recently.

Not everyone is satisfied by that explanation. Rep. Ed Markey, D-Mass., who chairs the House Select Committee on Energy Independence and Global Warming, wants more answers. "The public needs to know the answers to very basic questions: How much oil is leaking into the Gulf and how much oil can be expected to end up on our shores and our ocean environment?" Markey wrote BP Friday morning. "I am concerned that an underestimation of the flow may be impeding the ability to solve the leak and handle management of the disaster. We have already had one estimate that grossly underestimated the amount of oil being released, and we cannot afford to have another." But Markey's office told Salon his ire is mostly directed at BP and its corporate pals, not the government; government agencies are already busy cleaning up BP's mess.

Anger is an entirely reasonable response to a disaster that threatens to poison the Gulf Coast and bankrupt entire communities -- and one that shows no sign of abating any time soon. A righteous fury directed at Big Oil and the government agencies that oversee it could help bring about some long-needed changes. What complicates matters for Obama, and for Democrats in general, is that until the Deepwater Horizon collapsed, the White House was pushing for more offshore drilling -- just like the "drill, baby, drill" chanting Republicans -- as part of its push for climate change legislation. Obama's indignation at BP and the government he runs on Friday was a decent start -- but it was only a start.