Cannes gets a peek at the "Wall Street" sequel, and a seminar on capitalism with Oliver Stone 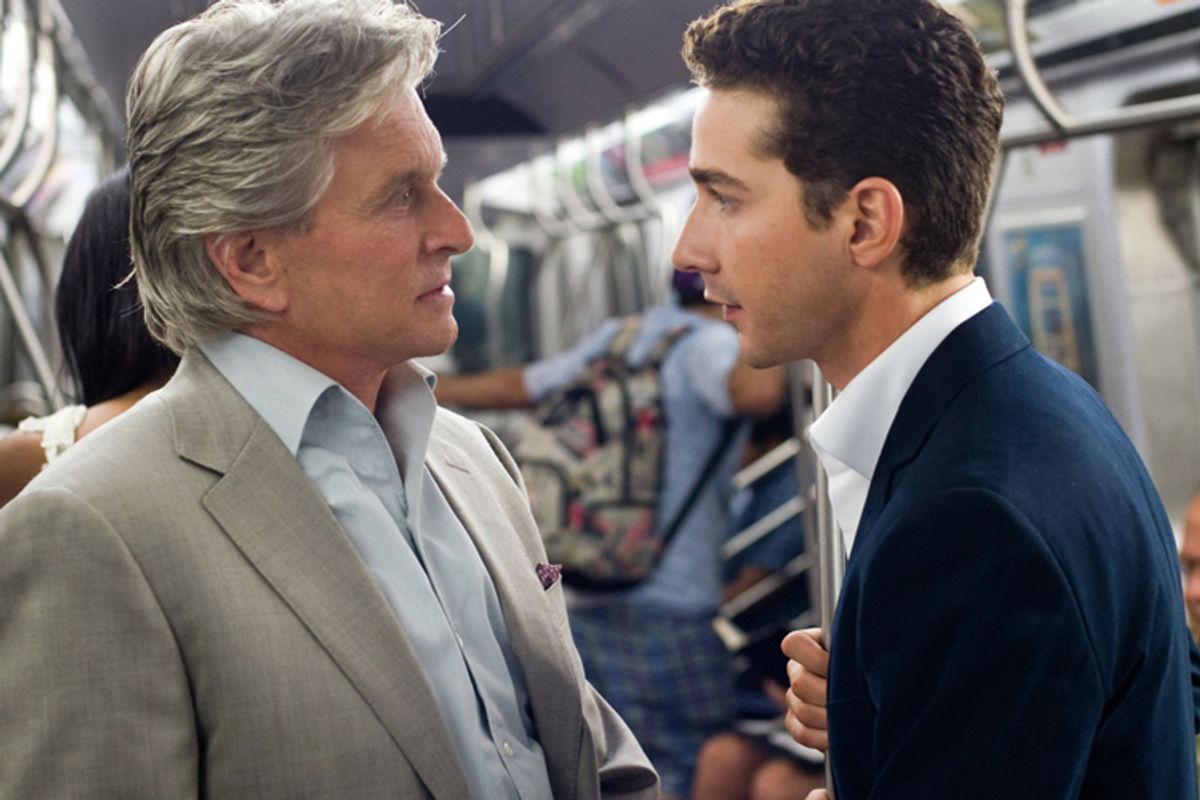 CANNES, France -- Oliver Stone has returned to the characters and themes of his greatest success -- and arguably his greatest failure -- after 23 years in order to preach a sermon on the topic of "moral hazard." As Gordon Gekko, the legendary financial shark played by Michael Douglas, explains to a civilian in "Wall Street: Money Never Sleeps," that's a term used to describe the risks involved with entrusting your money to someone like a stockbroker or an investment banker -- someone who takes no responsibility for what happens to it later.

As millions of ordinary homeowners and investors all over the developed world have discovered over the last two years or so, the moral hazard associated with capitalism's boom-and-bust cycles can produce extraordinarily painful results. Stone's long-delayed "Wall Street" sequel will surely make news as the first major motion picture to dramatize the worldwide financial crisis, and to point the finger squarely at those who induced it, exacerbated it and lied about it.

But I also think Stone's new film expresses a more personal, intimate sense of moral hazard, which more broadly indicates the possibility that one or more parties to a contract may lie, cheat, steal or otherwise behave badly. Stone may now feel that his 1987 "Wall Street" made its piles of money under false pretenses, or at least that it failed to deliver the lesson he thought it would. Instead of a parable about the evils of greed and speculation, "Wall Street" was seen by many as an antiheroic saga with a charismatic dark angel at its center. (John Milton had much the same problem with "Paradise Lost," not that I'm equating the two.) For the would-be financial whizzes of the "American Psycho" generation, Gordon Gekko was a role model and a father figure, not a cautionary example.

"Oliver and I were both pretty stunned by the way people perceived Gekko," Michael Douglas told a packed press conference after the film's Friday morning preview screening. "He was a very well-written villain, and people are always attracted to villains. But we never imagined that all these MBAs, all these kids coming out of business school, would say he was the person they wanted to be.

"This time around, we saw an opportunity to start him over again from the bottom. And it's really ambivalent. The biggest question I get about Gordon in this movie is: Has he changed? Is he a changed man? Well, you don't find out until the end."

In that spirit, I'll discuss "Wall Street: Money Never Sleeps" only in general terms. Most of you won't get to see it until its worldwide release in September, and a full review should wait until then. It's an ambitious, uneven, surprisingly talky melodrama, which mixes a quasi-documentary approach to the crash of 2008 with the story, as Michael Douglas puts it, "about how money shapes families and how money can destroy families."

Along with Douglas, Shia LaBeouf and Carey Mulligan in leading roles, Stone's terrific supporting cast includes Josh Brolin, Frank Langella, Susan Sarandon, Vanessa Ferlito and 94-year-old Eli Wallach, sensational as a sinister Wall Street patriarch. Although the title has a nicely evocative ring, it's actually bowdlerized: "Money," Gekko tells would-be son-in-law Jacob Moore (LaBeouf) on a New York subway car, "is the bitch who never sleeps." In other words, one night she'll get away from you.

While the movie has moments of beauty (thanks to cinematographer Rodrigo Prieto) and considerable thoughtfulness, I only wish it had more of the mordant masculine menace suggested by that scene. Stone and his writers, Allan Loeb and Stephen Schiff, do indeed seek to tear Gekko down and then rebuild him, perhaps hoping to lay bare the essential nature of the man, and of the culture of endless accumulation and manipulation that he represents.

In the film's opening sequence, Gekko is released from federal prison in 2001, after eight years behind bars. He reclaims his personal belongings, which include a gold Rolex and a mobile phone that weighs more than the Manhattan phone book. No one shows up to meet him outside the gates. As we learn in short order, his daughter Winnie (Mulligan) won't speak to him, although she's his only living blood relative and also holds the keys to his financial future.

Flash forward to 2008, when Gekko has reinvented himself as a best-selling author and professional Cassandra, telling adoring throngs how much worse today's masters of the universe have fucked them than he ever did. That's when he meets Jacob, who is both engaged to his estranged daughter and is also an ambitious young energy trader at an investment bank that's about to drown under a tide of worthless paper. (The collapse of Jacob's firm is clearly modeled on the historic implosion of Lehman Brothers.)

Stone clearly longs to invest these characters with emotional and moral ambiguity, and to craft a tale whose heroes and villains are never entirely clear. (As Stone put it, "Each of the characters plays each other's roles at different times in the movie.") I'm just not sure that's where his strengths lie. It may not be accidental that Josh Brolin gives the movie's best performance as the thoroughly abominable Bretton James, an ultra-slick investment titan who helps bring Gekko and Jacob together (because they both hate his guts).

Brolin's character, however, is ancillary to the movie's central triangle, in which each member ostensibly wants the same thing -- to heal the rift between Winnie and her father -- but none of them is being entirely straightforward. Jake is a classic capitalist idealist, who believes he can make a killing on Wall Street while funding a major societal breakthrough (a voodoo-flavored fusion-energy scheme). Winnie wants to put her left-wing investigative website on the map with a major scoop. (No, as far as I can tell it's not supposed to be Salon.) And Gordon wants ... well, what the hell do you suppose Gordon wants?

If you think it's a bit rich to sit around at a resort town in the south of France with a bunch of people from Hollywood talking about the evils of capitalism, well, you'd be right. Nonetheless, that's exactly what we did at the press conference, which offered one of the most felicitous and absurd combinations I've experienced in several years of coming here.

Things happen at Cannes that don't happen anywhere else. One question came from an Iranian journalist, who inquired about Stone's dormant plan to make a documentary about Mahmoud Ahmadinejad, Iran's controversial president. (It remains dormant.) The next reporter who took the mike was from Israel, and we all held our breath. But no, he didn't challenge his colleague from Tehran to talk about nuclear reactors or the Holocaust. He asked Michael Douglas about being an older actor in Hollywood. (There are fewer studio roles, but you can still find parts in interesting independent films.)

Beefy, mustachioed and sunburned, Oliver Stone looked ready to step outside, don a tan blazer and work alongside the alternately menacing and cheerful security guards who man the doors of the Palais des Festivals. When Douglas and producer Edward Pressman approached him about reviving Gekko and "Wall Street," he said, it was 2006 and the boom was near its apex. "I didn't want to celebrate that culture of wealth. It just seemed wrong, it had no appeal for me. But after the crash -- I mean, that was a major heart attack. Then I knew it was time for Gordon Gekko to come back."

Asked by an Arab journalist whether the film was "anti-capitalist," Stone paused for a long moment and chose his words carefully. Stone is not entirely unlike Gekko, in that he plays a double game and is always in danger of succumbing to moral hazard. He hangs out with Hugo Chávez and Fidel Castro (with whom he recently filmed a third and presumably final interview), but also wants to keep on making Hollywood movies and flying first-class to Cannes on somebody else's nickel.

"I'm confused, as are many people right now, about whether capitalism in its present form will work," he finally said. "It seems not. It goes beyond America, of course, to England and Greece and many other places. It looks like we need serious reform and regulation.

"You know, when I look back at the '80s, it's like we all got drunk. In 1987, I thought was going to correct itself. But it didn't. It got worse. The real income of the American worker flattened out in 1973, but American productivity went way up. So there's a real imbalance between what ordinary people make and what the bosses and managers, the people at the top, make. It's an enormous problem."

The next question came from an Egyptian fellow who asked Michael Douglas, "What is it like to be Michael Douglas?" The answer was about children and nuclear weapons.