The challenger holds a final campaign rally in his House district, ahead of Tuesday's Democratic Senate primary 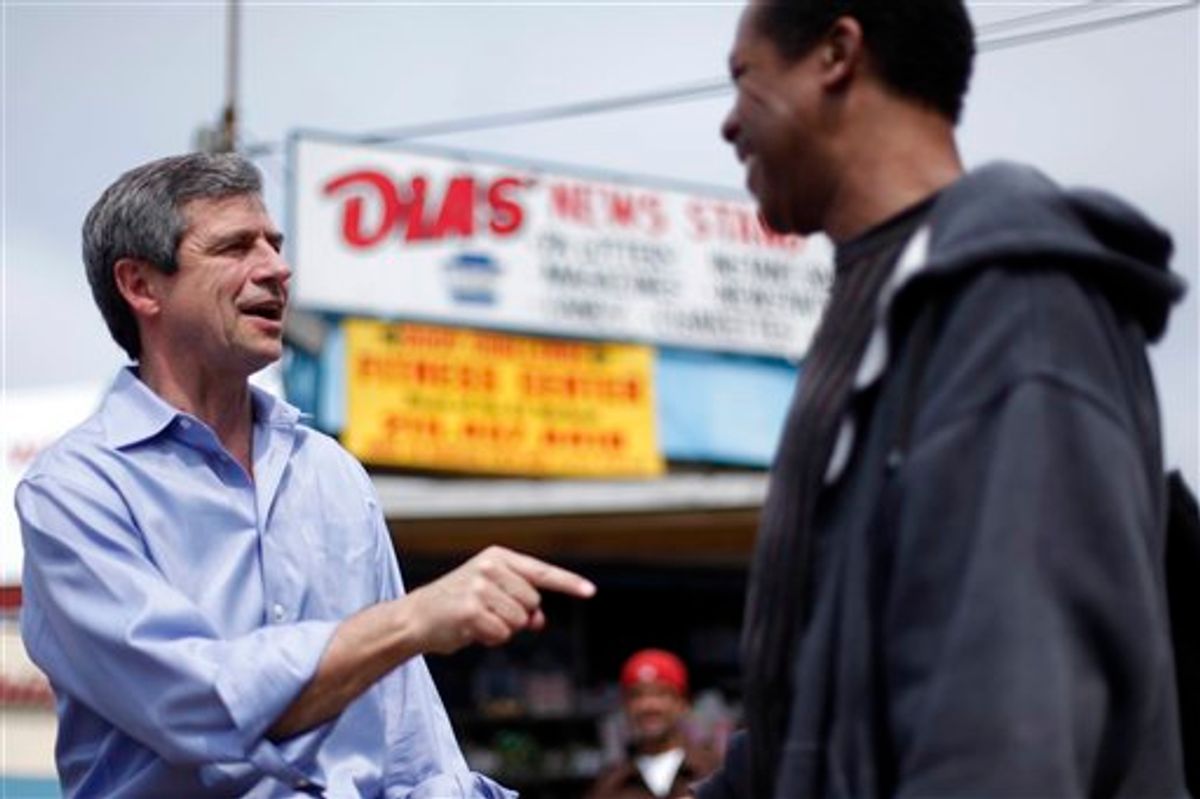 Rep. Joe Sestak, D-Pa., a candidate in the Senate Democratic primary race, is seen during a campaign stop near the Olney Transportation Center in Philadelphia, Friday, May 14, 2010. Sestak is in a close race in Tuesday's Democratic primary with Sen. Arlen Specter. (AP Photo/Matt Rourke) (AP)
--

To Pennsylvania voters, the backdrop to Joe Sestak's final campaign rally of the state's Democratic Senate campaign Sunday afternoon should look familiar. For the last weeks, it's been popping up more and more often on their TV screens; in 2008, Arlen Specter stood here, on the steps of the Delaware County Courthouse, and endorsed Sarah Palin and John McCain. Sestak hasn't been letting anyone forget it lately, running ads constantly that highlight Specter's GOP past -- and feature the Palin rally prominently.

The surging challenger didn't mention that particular act of Republican loyalty in his stump speech Sunday, but he probably didn't have to. The couple hundred people who showed up were all Sestak loyalists, some of whom shouted, "Retire!" whenever he mentioned his incumbent rival. "He's a man on a mission," Colleen Guiney, a pediatric nurse practitioner from Swarthmore, Pa., who chairs the local Democratic Party committee, told me. The rally was in the heart of the district Sestak has represented in the House since 2006, and his campaign headquarters was only a few blocks away. The theme from "Top Gun" blared from the speakers, alternating with the 1992 Clinton campaign anthem, "Don't Stop," until Sestak arrived (45 minutes after he was scheduled to be there).

Sestak's message, in a 14-minute speech, was pretty simple: It's time for a change. "I have respect for Arlen Specter -- he has done some good things," Sestak said. "But there's been a generation of politicians, that for far too long have become encumbered with an unconscious -- maybe even conscious -- understanding... where their job seems to be a bit more important than what I consider doing the right thing." The race isn't about Sestak, or Specter, the challenger said; it's about Americans who have lost their jobs. He asked for help from his base on Tuesday, in a race that looks like it'll come down to the ground game. "We got 48 hours left," he said. "I need everyone. I tell my staff, 'Yes, I, Joe Sestak, could lose this by myself.' But I cannot win it without you. You did it for us back several years ago. I'm asking you to do it again. I need you."

All the momentum in the race seems to be on Sestak's side, which may be why his rhetoric drifted a bit into what sounded like general election territory. "I'm a Democrat," Sestak said. "People ask me if I'm a liberal or if I'm a conservative. I tell 'em I'm neither -- I'm just pragmatic."

Which, of course, underscores one of the ways this Pennsylvania showdown is sui generis, an imperfect bellwether for the rest of the election year to follow. On many issues, Sestak really isn't that far to Specter's left, even though he's been positioning himself there; Specter opposed the Afghanistan troop surge, for instance, and Sestak supported it. Nothing in Sestak's stump speech highlighted any policy differences with the incumbent. Chances are there are two things that will determine the winner Tuesday: Whether the state's Democratic establishment can motivate people to turn up and vote, especially in Philadelphia; and whether people can overcome Specter's 30 years as a Republican and pull the lever for him anyway. Like most contests involving an incumbent, it's turned into a referendum on the guy who's already in office.

Earlier in the day, both candidates had appeared on CNN's "State of the Union," to make their closing arguments on TV; by this point, the national media may be following the race more closely than local outlets are. (Only one Philadelphia TV news crew drove the 10 miles from downtown to cover the rally.) Sestak drew some flak when he appeared to tell CNN he wouldn't support Specter against Republican Pat Toomey if he won. Talking to a few reporters after the rally, he clarified things.

"Pat Toomey has to be defeated!" Sestak declared. "Whatever it takes to make sure he is -- anything legally or ethically, and I'll do it in a principled way." But he'll be the nominee, he said. And if he's not, Democrats will be in trouble. "Pat Toomey must be defeated -- he will be, if I win," Sestak said. "He won't be, if Arlen Specter is the nominee."