Best of Cannes: "Another Year" with Mike Leigh

Can you make a happy marriage worth watching? In a challenging new film, the English master does his best 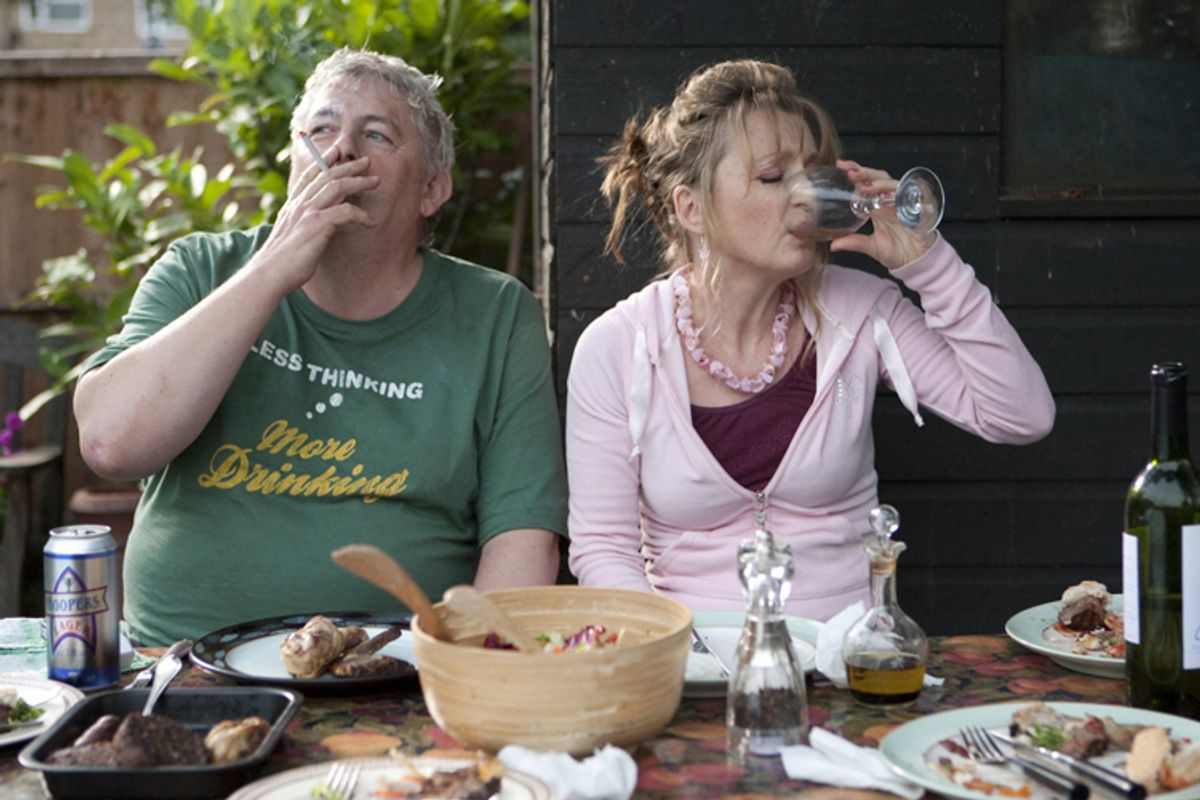 Peter Wight and Lesley Manville in "Another Year"
--

CANNES, France -- Mike Leigh's "Another Year" is an admirable, wonderfully crafted film on many levels, and features one of the few portraits of a happy marriage in dramatic or cinematic history that's actually interesting to watch. But from its title on down through the details of its execution, this film feels very much like a recapitulation of what Leigh has done before (in such earlier films as "High Hopes" and "Secrets and Lies"). This is an intimate, improvised, almost totally plotless and resolutely non-commercial exploration of middle-class English life, which in a strange way symbolizes the predicament facing auteur-oriented cinema in general and this festival in particular.

At the visual and moral center of "Another Year" lies the modest but welcoming London home of Tom (Jim Broadbent), a geologist, and his psychologist wife Gerri (Ruth Sheen), who are drawing near to retirement age in a state of remarkable tranquility. Certainly they are aware that old age with all its tribulations lies in front of them; they are a bit irascible and stuck in their ways, after the fashion of British domestic comedy. But they seem genuinely delighted with each other's company and happy to receive each day as it comes. I dare say there's no other director in the world who could do what Leigh does with this material -- and of course he's also got a pair of marvelous actors steeped in his improvisational, character-building method.

Tom and Gerri's house provides a safe harbor, as the film moves along, for an assortment of waifs and strays, including their unmarried 30ish son Joe (Oliver Maltman); Ken (Peter Wight), a childhood friend of Tom's who has descended into alcoholism and despair; and Tom's recently bereaved and totally uncommunicative older brother, Ronnie (David Bradley). But all those people are ready to become self-help gurus when compared to Mary (Lesley Manville), a slightly younger colleague of Gerri's whose personality is going down in flames. Still obsessed with bad, old relationships -- a youthful marriage, a later romance with a married man -- Mary dresses and acts in a flirty, girly mode, drinks like a fish and has even started coming on heavily to Joe, who may be 20 years younger.

When Joe finally shows up with Katie (Karina Fernandez), an age-appropriate and entirely charming girlfriend, Mary proceeds into full nuclear-core meltdown mode, and the question of whether this nails-on-chalkboard frenemy is worth rescuing is about as much narrative as "Another Year" ever delivers. Other characters come and go, and Tom and Gerri even travel to Hull, in northern England, for one of the most depressing funeral scenes ever committed to film. But there's no pretense of a dramatic resolution: We quite literally watch "another year" with Tom and Gerri, who are doing quite well, thank you (are grandkids now on the horizon?), while Mary either will or will not keep herself out of the loony bin.

At this juncture, about halfway through the 2010 Festival de Cannes, "Another Year" is seen by many observers here as a leading contender for the Palme d'Or. I don't necessarily disagree. Given that Leigh has a small but loyal American following, I suppose some United States distributor will take it on eventually. But boiled down ruthlessly to its essence, this is a non-narrative movie about older, married people. That's a very large demographic, but it isn't one that spends much time at the movies. In fact, you could hardly design a movie with less obvious marketing appeal, or that so thoroughly lacks the kind of pretension that's likely to produce buzz, or to be described as innovative or ambitious. I suppose that in its own quiet way that's an act of artistic bravado.