Specter and Sestak both aim for Obama appeal

On primary day in Pennsylvania, both candidates try to show they can be the White House's guy 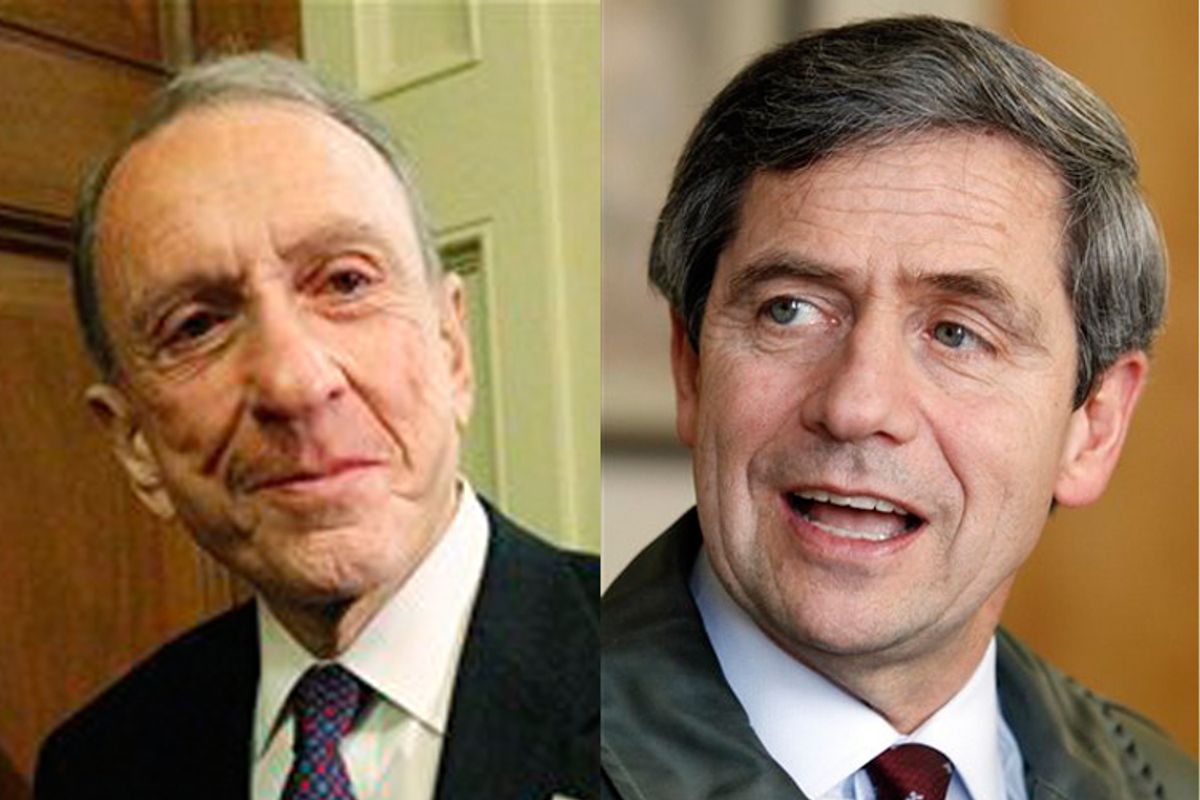 As the polls open here Tuesday morning, President Obama will be on television, telling voters to support Arlen Specter. He'll be on the radio. His voice will be making computerized phone calls to loyal Democrats.

But the actual president? He'll be literally flying over the state around lunchtime, on his way to Youngstown, Ohio (just past Pennsylvania's western border), to talk up signs of an economic recovery.

Which, if you look at the final days of the Senate primary between Specter and his surging rival, Rep. Joe Sestak, is probably apt. Obama has been hovering over the race all along, endorsing Specter in exchange for his switch from Republican to Democrat last year, throwing his former campaign apparatus into the fray on Specter's behalf and -- in the last couple of weeks -- urging supporters to back the incumbent in TV ads, radio spots and automated phone calls. Specter's whole campaign, especially the crucial get-out-the-vote operation in Philadelphia, boils down to his ties to the president. But as the race comes to a close, Sestak has been trying to walk a delicate line, too. Sure, he's the rogue insurgent who isn't afraid to take on the party establishment, but he's also careful to say he wants to be Obama's "closest ally" if he makes it to the Senate. And yet Sestak's camp is expecting most of the "surge" voters who came out two years ago to vote for Obama to stay home.

All that means it's hard to say exactly how useful Pennsylvania's primary is as a test of Obama's ability to motivate voters in a crummy economy, and a midterm election, when he's not on the ballot. The entire Democratic establishment, from the White House to Gov. Ed Rendell to organized labor, is working on Specter's behalf. But the guy only joined the party a year ago; some of the die-hard voters the machine is turning out for him Tuesday have probably voted against him for the same job five times before. And Sestak is mimicking the "change" message that helped Obama win in 2008, playing to liberals fed up with Specter, but also to a broader audience fed up with incumbents. (A group he belongs to, too, after two terms in the House.)

Faced with a choice between an 80-year-old former Republican incumbent and his little-known challenger, voters barely seem to be paying attention at all. If Specter loses, it may say as much about his own flaws as a candidate in the particular political climate of the moment as it does about Obama. But don't try to argue Specter isn't trying to hitch his wagon to the White House.

"Like President Obama, I love Sen. Arlen Specter," Philadelphia District Attorney Seth Williams -- who, like many of the voters Specter is counting on Tuesday, is African-American -- told a small rally in a drizzle outside the Phillies game early Monday evening. Specter showed up for what could be his last major campaign event (besides some meet-and-greets at polling places Tuesday) and immediately set about making clear whose votes he was after. "I'm proud to have the endorsement of the black clergy, along with the Philadelphia Tribune," he told some of his volunteers and a cluster of reporters. The message was clear: Obama could count on Specter. "The biggest vote I cast in my 10,000 votes in the Senate was for the Recovery Act," Specter said. "[Obama] came to me, and he said, 'Arlen, I need your help ...' and I said, 'I'm with you, Mr. President.'"

But then Specter rambled through a recitation of his résumé, twice pointing out that he had voted "more than 20 times" for minimum wage laws, citing his work on nuclear disarmament and selectively skipping through some of his career as a Republican to claim he had voted more often than not with Democrats (which is only true if you discard a lot of the votes). At one point, Specter called out the Washington Post's Paul Kane, who was standing off to the side listening, while he ran through a list of Monday's front-page newspaper stories about the Senate primary -- a sure sign you've become an inside-the-Beltway institution.

Specter's whole closing argument bucks the trend in a year when incumbency seems like political poison. Where some candidates rush to show they understand voter anger outside of Washington, Specter rushes to show how his clout in the Senate can help people back home: He's running an insider's game in an outsider's year. After three decades in the other party, that may be his best bet. But even some of Specter's own supporters aren't sure how much the Obama endorsement, and the establishment backing in general, will really help him. "It's a balancing act," John Cordisco, the Bucks County Democratic Party chairman, told Salon. "You have to be careful when you come in with the endorsements from figures such as the president and governor. Many people might feel somewhat offended by a sense that they need to be told which way to vote."

All the endorsements are supposed to help get the vote out. It's not clear they will. In West Philadelphia, near 52nd and Market streets -- where Obama held a massive rally in October 2008 -- you could hardly tell there was an election coming up at all. Would-be voters said no one was talking much about the contest. Specter had a few fans: "When he was a Republican, he wasn't a bad Republican," said Shawn Ambrose, 28, who says he'll show up for Specter in part because Obama endorsed him. "We pretty much listen to Obama -- in this community, we're all for him." Still, while Specter might win more votes than Sestak does in the city, the total turnout could be too low for it to make a difference.

Besides, in the last week of the race, Sestak has tried to seize the Obama mantle himself, sensing an upset victory might be coming. "This time it's really different," he said Sunday. "There's no endorsement that can overcome the sense of having been powerless as Washington seemed focused on policies that weren't helping [voters] but helped Wall Street."

Of course, that's muddled Sestak's own message a bit. He wants to appeal to Obama voters, but he doesn't expect them to turn out in large numbers, and he's also claiming part of his appeal in the general election is the fact that he bucked the party establishment -- including Obama -- when they backed the wrong guy in the primary. "I'm able to say I stood up to the Washington, D.C., Democratic Party establishment when they were wrong," he said. "When the party's wrong, I'll stand up and say, 'You're wrong,' and I'll fight for the working families even at the cost of my job here." And for all of Sestak's attempts to play the outsider, he also talks about legislation he's sponsored in the House plenty.

Still, the thing that counts the most for Sestak may simply be that he's not Specter. Sestak's supporters don't dispute the help Specter will have -- between Obama's endorsement and a GOTV effort led by labor unions. But they don't expect it to yield the results Specter's side does. "The people that are going to come out are the committed voters, and those are the same voters that educate themselves about the issues," said state Rep. Tony Payton, a Democrat whose North Philadelphia district voted overwhelmingly for Obama in 2008. Payton bucked the party establishment to back Sestak last week, because he couldn't abide Specter's previous positions as a Republican.

Which, in the end, is what makes Tuesday's race such a strange one, even by the standards of the last few wild years in politics. The only reason the White House is backing Specter in the first place, after all, is because he secured their help in exchange for switching parties -- in order to provide Democrats a 60th vote in the Senate, which they no longer have anyway, and after he had already helped pass the economic stimulus plan. Now the same party apparatus that fell just short of knocking Specter off six years ago is trying to drag him over the finish line. If it works, Specter will face Republican Pat Toomey, who was sure to beat him in the GOP primary if he hadn't flipped, and whom he only barely beat out for the Republican nomination in 2004. If it doesn't work, meanwhile, Democrats will have nominated Sestak mostly by virtue of his willingness to be the only candidate who disobeyed Democratic efforts to clear the primary field. The results Tuesday may not say much about Obama directly. But whatever happens, Pennsylvania might be giving the White House headaches for a while longer.