Why do voters hate incumbents?

The contempt for the political establishment is clearly trans-partisan. Can that produce some good outcomes? 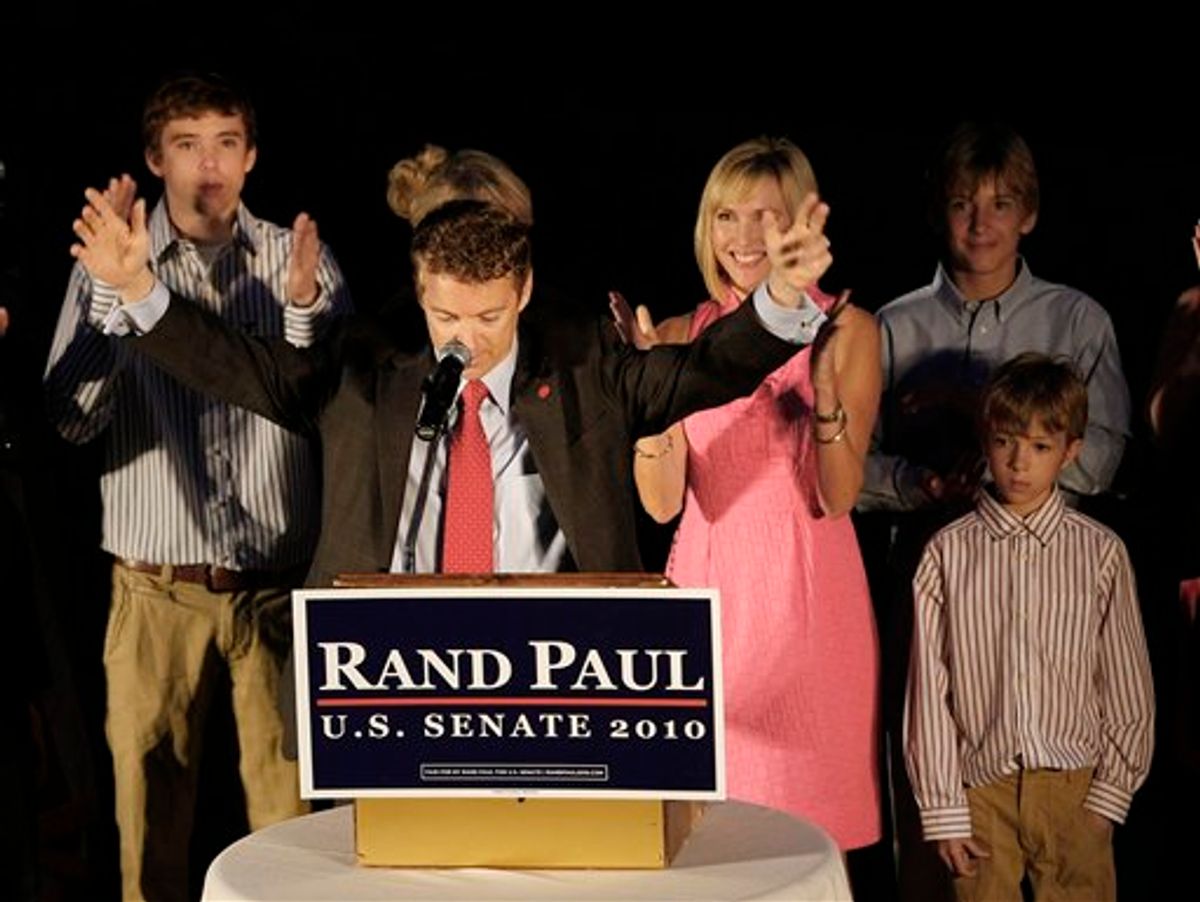 Republican U.S. Senate candidate Rand Paul raises his arms to the cheers of supporters at his victory party in Bowling Green, Ky., Tuesday, May 18, 2010. At left is Paul's son William. At right is his wife Kelley and sons Duncan, top, and Robert. (AP Photo/Ed Reinke) (Associated Press)
--

After last night's election results, there's no doubt that the electorate has contempt for Washington incumbents and the political establishment.  Virtually every media account dutifully recites the same storyline -- that these results reflect an "anti-incumbent" mood -- but virtually none of these stories examines the reasons for that "mood."  Why do Americans, seemingly regardless of party affiliation or geographic location, despise the political establishment?

One reason why media mavens seem reluctant, even unable, to grapple with this question is because it so plainly falls outside their familiar, comfortable narratives.  Contrary to efforts earlier this year to depict the problem as one aimed at Democratic incumbents due to the unpopular health care plan and the growing "tea party" movement, Republican voters -- as demonstrated in Florida, Utah, and last night in Kentucky -- clearly hate their own party's leadership at least as much as the animosity directed toward Democratic incumbents.  The trend is plainly trans-partisan and trans-ideological, and the establishment political media has a very difficult time understanding or explaining dynamics about which that is true.

So extreme is the anger toward the political establishment that not even popular politicians have any impact on it.  Despite the fact that he remains quite popular with his state's GOP voters, Mitch McConnell's handpicked candidate was slaughtered in Kentucky by a highly unconventional and establishment-scorned Rand Paul.  And just as Massachusetts voters did in December when President Obama traveled there to plead with them to elect Martha Coakley, only for them to reject those pleas and send Scott Brown to the Senate, Democratic voters completely ignored Obama's vigorous support for incumbent Senators Arlen Specter and Blanche Lincoln, sending the former to ignominious defeat after 30 years, and forcing the latter into an extremely difficult run-off with Bill Halter (who was recruited by Accountability Now, an organization I helped found and continue to run).

It makes perfect sense that the country loathes the political establishment.  Just look at its rancid fruits over the past decade:  a devastating war justified by weapons that did not exist; a financial crisis that our Nation's Genuises failed to detect and which its elites caused with lawless and piggish greed; elections that seem increasingly irrelevant in terms of how the Government functions; grotesquely lavish rewards for the worst culprits juxtaposed with miserable unemployment and serious risks of having basic entitlements (Social Security) cut for ordinary Americans; and a Congress that continues to be owned, right out in the open, by the very interests that have caused so much damage.  The political establishment is rotten to its core, and the only thing that's surprising is that the citizenry's contempt isn't even more intense than it is.  But precisely because that dynamic so clearly transcends Left/Right or Democratic/GOP dichotomies, little effort is expended to understand or explain it.

One of the most interesting and important questions is whether this trans-partisan, anti-establishment anger can bring about some cracks in the rigid partisan polarization that serves, more than anything else, to preserve the status quo.  Consider, for instance, that Rand Paul's campaign included some serious questioning of the war in Afghanistan and that Sen. Tom Coburn recently threatened to filibuster the $33.5 billion war supplemental spending bill if it isn't independently paid for, combined with the Democrats' realization that they will be forced on their own to fund the endless -- and increasingly ugly -- war in Afghanistan.  Or consider the odd spectacle that numerous Republicans are beginning to take the lead in questioning and even objecting to the Obama administration's efforts to further whittle away civil liberties and vest itself with greater unchecked power.

It's possible that the pervasive, trans-partisan anger can muddle, even re-arrange, the rigid partisan divisions that prevent citizens of similar interests from working together against the factions that control Washington.  One saw that in the alliance between progressives (such as Alan Grayson and Bernie Sanders) and conservatives (such as Ron Paul) that led to the enactment of the Audit the Fed bill, as well as in similar alliances during the Bush years in opposition to the assaults on the Constitution (such as the one forged by Al Gore and Bob Barr).  This isn't Broderian bipartisanship where the two parties' mix their policies into a muddled, watered-down mish-mash of nothing for its own sake.  It's far more substantive than that:  a refusal to allow ordinary citizens to be divided (and thus weakened) along artificial tribal lines, thereby enabling the establishment factions that feed at the Washington trough to maintain their same power in unchallenged form.

I'm not particularly optimistic about this possibility.  The reality is that the American Right is still the movement of Rush Limbaugh, Fox News, and Sarah Palin, really no different -- despite its "tea party" re-branding -- than what spawned the Bush/Cheney extremism of the last decade.  And even Rand Paul, who some are trying to depict as a crusading civil libertarian and anti-war advocate, ran on a platform (as Scott Brown did) of opposing the closing of Guantanamo, the use of civilian trials for accused Terrorists, and the granting of visas to people from numerous Muslim countries.  Many of the key ignorant and primitive orthodoxies of modern conservatism are as strong as ever.  Other than some (extremely hypocritical and opportunistic) war questioning and some anger over the growing corporate-Government overlap, I have a very hard time looking at the American Right and finding much cause for optimism about any of what's taking place over there.

Still, it's hard not to be encouraged by the disgust which the citizenry clearly has for the political establishment regardless of party, as well as the resulting (and increasing) fear and confusion on the part of the political class.  This sort of citizenry anger can re-arrange political alignments and explode political orthodoxies in fundamental and unpredictable ways.  There is, to be sure, a risk in that, but there is a far greater risk in simply allowing the destructive political status quo to linger in unchanged form for much longer.