Is candy really a food?

As a new Washington tax tries to distinguish "candy" from "food," an expert dissects our feelings about sweets 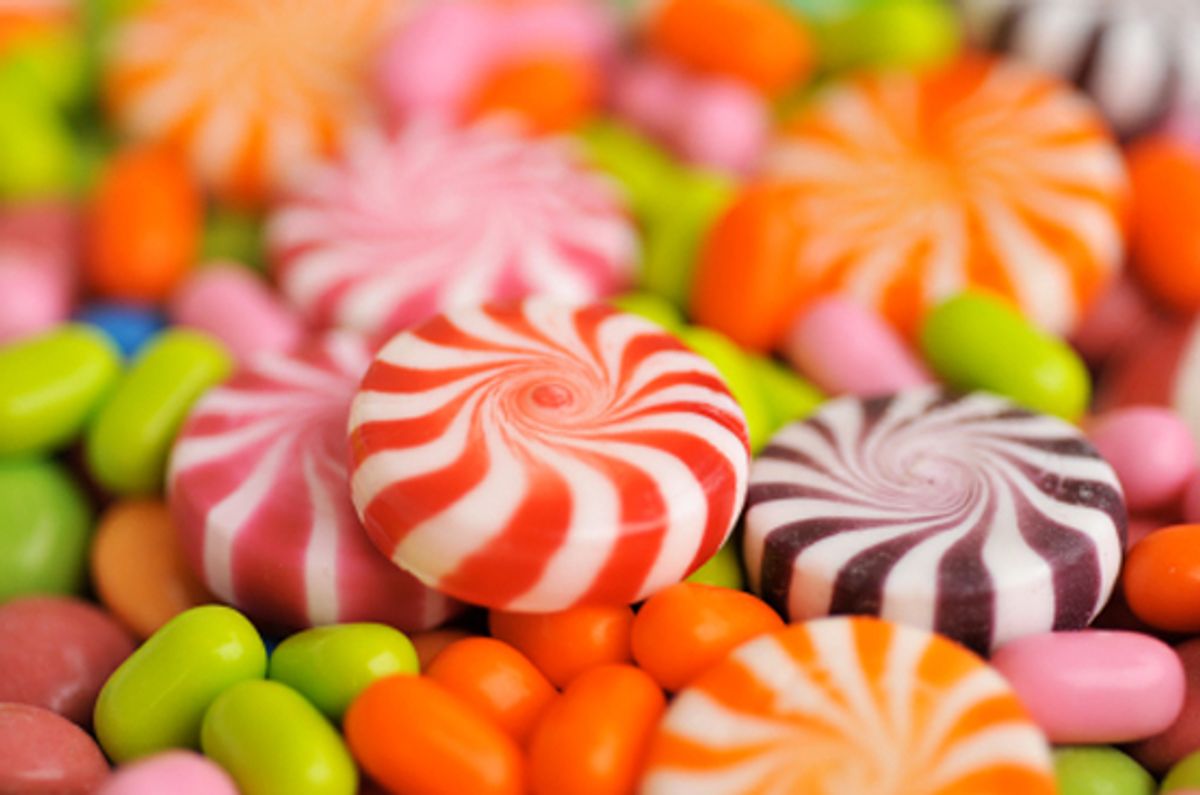 Last week, Washington state joined more than a dozen state governments that have passed or proposed a tax on sweets: Starting on June 1, the state will begin adding sales tax to the price of candy. The hard part, it turns out, is figuring out exactly what "candy" is. Does a chocolate-covered pretzel qualify? What about a yogurt-covered raisin? Where does "candy" end and "food" begin?

Washington, apparently, draws the line at flour. It defines candy as "a preparation of sugar, honey, or other natural or artificial sweeteners combined with chocolate, fruits, nuts, or other ingredients or flavorings and formed into bars, drops, or pieces." But any sweet that contains flour is considered food, and thus not taxable -- which sounds logical enough until you start looking at what is exempt. A Nestle Crunch bar is not candy, but a Hershey Bar is. Gummy Bears are candy, licorice is not. Milky Way Midnight? Candy. Milky Way? Not candy.

Clearly, the flour rule is not an effective way to distinguish what is and isn't candy, but is there a better way? To find out, Salon spoke with Samira Kawash, also known as the "Candy Professor," a professor emerita at Rutgers University who is writing a book about the cultural history of candy in America.

Why is candy so hard to define?

There isn't any substance that's purely candy. "Candy" is really more a feeling about the product, and in fact, it's a distinction that runs along moral lines.

What do you mean by that ?

Candy is the essential substance of pleasure, but at the same time it is always tainted with the association of sin. And that sin, that "dark side" of candy, has historically taken lots of different forms. In the 1880s through the early 1900s, there were these fears about adulteration, that the candy was somehow being tainted by impure ingredients like artificial coloring, or clay dust in place of sugar. But the level of alarm over adulteration was far in excess of any problems with the candy itself, which was actually pretty good quality at that time.

There was a series of accusations of candy poisoning during this period -- when kids got sick, people claimed it was because of tainted candy, and it was reported in all the newspapers. Each time, the National Confectioners Association investigated and showed, over and over again, that there was no poison in the candy, and there was some other medical explanation for why the child got sick.

The idea that there's something dangerous about candy is repeated throughout history. That was 100 years ago, but when you look at this century, the ideas about danger are still there -- sugar is harmful, candy causes cavities, it causes your teeth to rot, it causes diabetes. Certainly, candy plays a role in those things, but it's not the only thing that does. There's a real moralism involved.

Is this why we're willing to accept a candy tax?

There is this idea of the candy tax being a "sin tax"-- we should tax candy because it's bad and people shouldn't eat it -- whereas if we look at other foods, there isn't the same type of judgment.

What makes the current attempt to define candy different from those in the past?

Culturally, one of the things that candy does is provide a line between "food" and "not food." As long as we can say, "that over there is candy," then we can feel better about all the other junk in the grocery store that we call food. Michael Pollan has that really useful idea of "food-like edible substances," all the stuff on those middle aisles of the grocery store that is as processed, sweet and fatty as any candy, but we call that "food." If you take a more "real foods" approach, it's clear that none of it is food.

I think if we looked at it reasonably, we'd either group all of that stuff together and say a Snickers bar is just as much food as one of those Quaker chewy granola bars, or we have to say that none of it is food, but you have powerful commercial interests [in the processed food industry] to ensure that that doesn't happen.

Not inherently. The arguments for a soda tax, like the one proposed in New York, are really similar to those for the candy tax, but to build momentum for a tax, the Center for Science in the Public Interest has been working for 10 or 15 years to redefine soda as "liquid candy." It's interesting that soda seems OK to people until they start calling it candy -- it's really been changing the name that has gotten traction on the idea that we should be limiting soda and taxing it.

The distinguishing feature in the Washington state candy tax law is flour. What's so wholesome about flour?

Of course there is the notion of the wholesomeness of cookies and pies and cakes, and the association of baked goods with the home. I think one of the reasons that candy was historically viewed with so much suspicion is that it was one of the first processed products produced on a commercial scale. There is a real distance between the kind of candy you would make at home and the kind of candy you would buy at the store, whereas commercially produced baked goods were much more similar to homemade food. There's a closer association of a bakery with something that's pure and domestic, and with candy, it's, "Where is it coming from? Who is making it, and what are they making it out of?"

Is there any truth to that?

In the early part of the century, when [the food industry] started debating the merits of processed food, and when white flour bakery goods were only recently available, they discovered that white bread really didn't have any nutritional value unless you fortified it with vitamins. There's not really that much of a difference between white flour and white sugar. But the baking industry and the agriculture interests were much more successful at associating flour with wholesomeness and nutrition.

How do you think this debate is going to change candy?

I think everybody's going to put flour in their candy now. It's so surprising to find out which candies actually have flour in them. I mean, Milky Way? Really? When they made the rule, I'm sure they didn't realize how many types of candy would actually qualify as food.