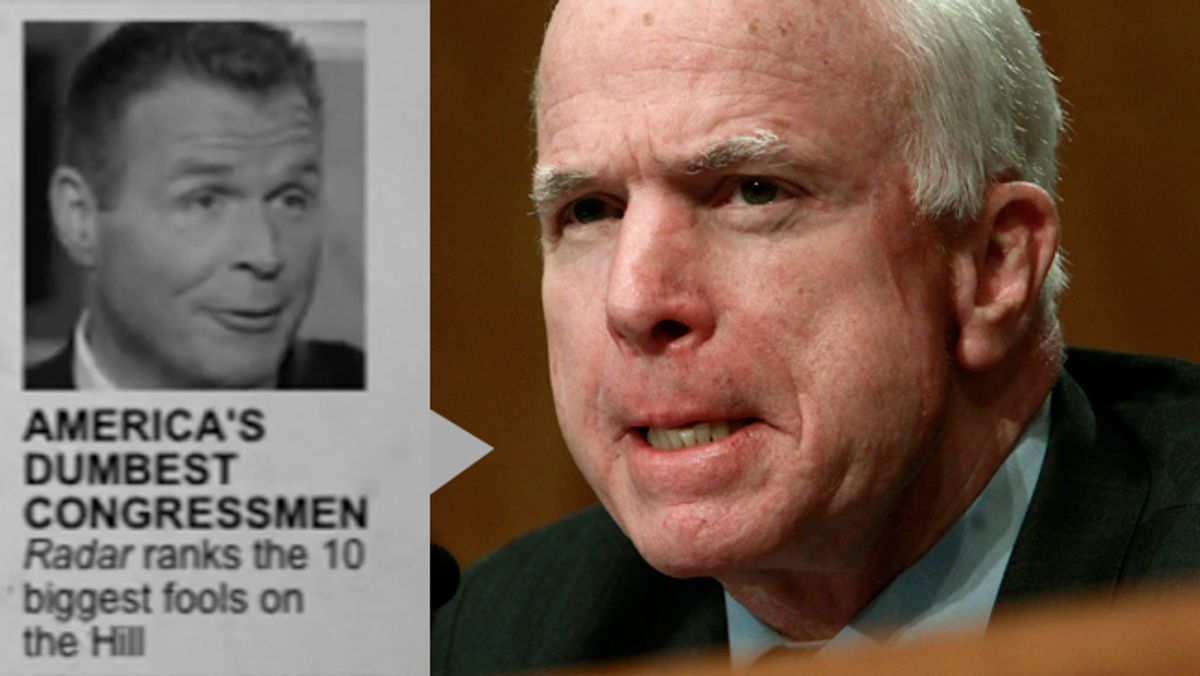 John McCain's campaign can't seem to decide whether they think J.D. Hayworth's Republican primary bid is a real threat to the incumbent's political career, or a nuisance launched by a guy who even Arizona's GOP voters realize doesn't belong in the Senate.

McCain advisors say their polling finds many Arizona voters don't consider Hayworth an entirely serious candidate; obviously, a Web ad that tags him as dumb seems to play directly into that. When Hayworth served in the House, he often came off as a blowhard, portentously calling for over-the-top legislation on immigration and border control without actually getting any of it done. That helped Democrat Harry Mitchell beat him in 2006 in a marginal district (that, and Hayworth's ties to Jack Abramoff). The Arizona Republic called Hayworth a bully in endorsing Mitchell.

Which would all seem to argue for a strategy of ridiculing Hayworth in the primary. The tactic has worked, sort of, for McCain before; the Web ads advisor Fred Davis made in the summer of 2008 mocking Barack Obama helped narrow the presidential race in August and early September. And Obama is a much harder target for lampooning than Hayworth.

Instead of focusing on reminding voters how much they disliked Hayworth in the past, and how absurd he can be, though, McCain has simultaneously done that and run to the right to protect himself as if Hayworth was a perfectly credible candidate. In the process, he's exposed himself to some ridicule, for the way he's reversed himself on immigration and the military's ban on gay soldiers. The campaign has shifted into areas that could be more favorable to Hayworth -- like border security -- in part because McCain has jumped over to Hayworth's side of just about every debate.

The political climate this year is obviously pretty dire for incumbents, including in primaries; just ask Bob Bennett or Arlen Specter. But Hayworth isn't even getting the Tea Party support some Republican challengers have. Clearly, Hayworth isn't breaking through to voters the way other GOP insurgents did -- McCain is still up by 20 points in the polls, despite his long Washington résumé in a year when that won't help you. Maybe soon he'll realize that.