An aide to Issa says the New Hampshire lawmaker shouldn't have cut a deal with the White House, either 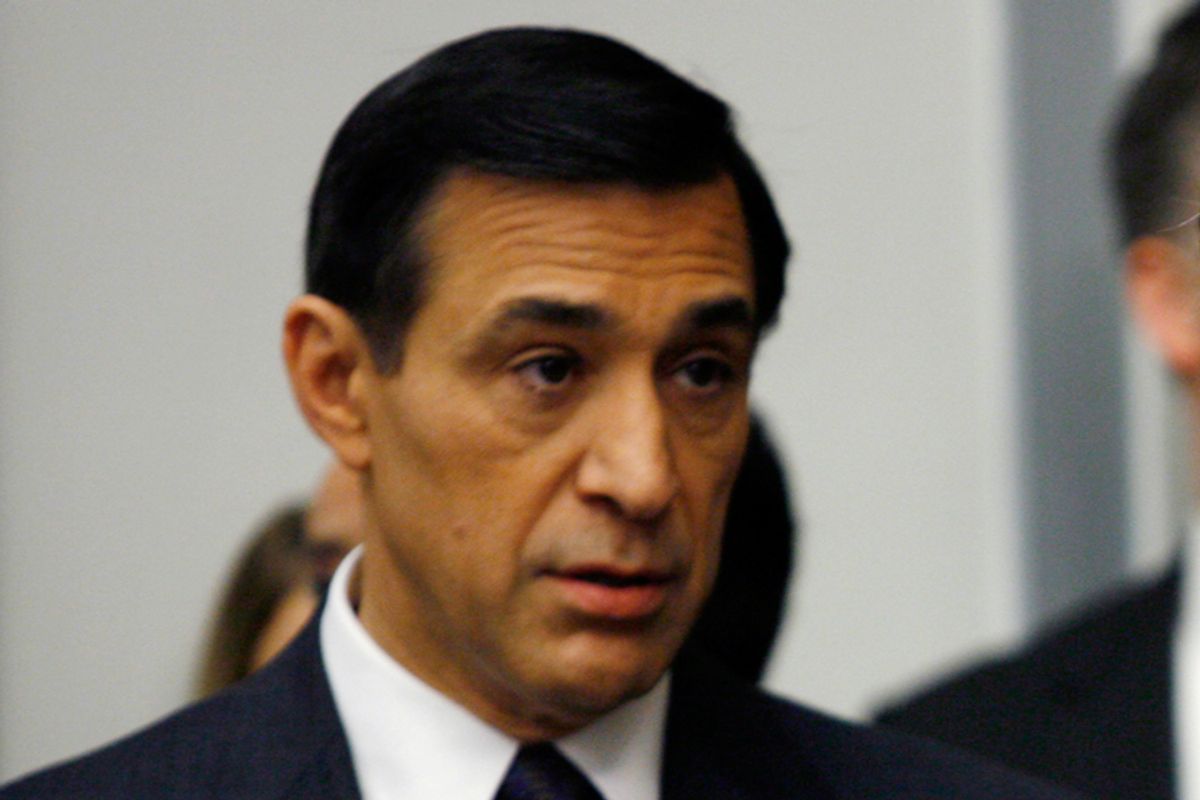 The zeal that Rep. Darrell Issa has brought to his pursuit of the allegations that the White House dangled some kind of job in front of Joe Sestak last year while they were trying to muscle him out of the Pennsylvania Senate primary is impressive, if also a little amusing. Issa, the ranking Republican on the House Oversight Committee, has been thundering about an alleged bribe, using scary words like "impeachable," "crime" and "ethics complaint." (Actually, considering how rarely the House Ethics Committee can be roused to do anything about lawmakers, that last one isn't so scary.)

But as Alex Pareene has already noted, this isn't exactly the first time someone in politics cut a deal for a job. When Sen. Judd Gregg was going to leave Congress to join the Obama administration -- which, in the end, he didn't do, because he realized he disagreed with everything President Obama stands for -- he wasn't going to take the appointment to become commerce secretary unless his replacement in New Hampshire's Senate seat would caucus with the GOP.

So Salon asked Issa's office what, exactly, the difference between the two situations is. At first, Issa's staff insisted they were nothing alike. "That never happened, at the end of the day," Issa spokesman Kurt Bardella said of the Gregg appointment quid pro quo. "It never played out."

That's because Gregg declined the appointment, and never vacated his seat. (Democrats are hoping to seize it in this fall's election, anyway.) But that isn't actually a distinction between the Gregg situation and the Sestak situation, because as it happens, the Sestak scenario "never played out," either; Sestak refused to drop out of the race and wound up winning the nomination. Bardella said that made the Sestak allegations even worse, because if he had taken the job and dropped out, it would have changed the course of an election. And at first, he said Gregg hadn't actually confirmed the contours of the deal the way Sestak had spoken of the offer from the White House.

After we hung up, though, I found a quote from a Gregg statement, making clear he wanted a Republican appointed (and another quote from Gregg's appearance with Obama, where he thanked New Hampshire Gov. John Lynch, a Democrat, for "his courtesy and courage in being willing to make this possible through the agreement that we have").

Which, to Bardella's credit, and Issa's, meant he changed his tune a little bit.

"If the White House had come to Judd Gregg and said, 'We will make you the secretary of commerce, in exchange for which we will guarantee the appointment of a Republican,' that would be just as wrong," Bardella said. (Which is, of course, exactly what happened.) "That would be worthy of the same scrutiny and would still be a violation of how [Obama] said he would govern. Once you vacate your seat, you announce your intention to take another job, you lose the right to dictate what should happen to that seat. No one person owns a seat ... Offices in the United States Congress should not ever be used as bargaining chips."

So to recap: Issa's staff says Gregg's deal is just as bad as the one Sestak alleged. We'll pause here to allow for the angry phone calls and e-mails back and forth between people who work for Gregg and Issa. (And while we wait, we also have a call in to Gregg's office for comment, which wasn't immediately returned.)

The bottom line, though, even if Issa had investigated Gregg with the same doggedness that he's bringing to the "scandal" that will inevitably, thanks to uncreative cable news chryon authors, become known as Sestak-gate or bribe-gate, is still the same: This stuff happens all the time in politics. Sestak, who even his close supporters will acknowledge has different instincts than many other politicians do, probably made more of the White House pitch than someone who was less of a newcomer to the political world would. But there's almost no way anyone in the White House -- whether it was, as rumored, Rahm Emanuel or someone else -- actually explicitly said to him, "We'll give you X job if you do Y." Both Sestak and the White House could easily be telling the truth -- the possibility of a job may have been floated, but nothing remotely illegal happened. There would be no need to spell anything out explicitly -- and illegally -- because the nature of the tradeoff would have been clear to both sides.

In the end, the whole "scandal" depends on Republicans, and the media, being willfully naive about the nature of politics. Does any politician, ever, do something they don't want to do without getting something for it? And is there any better way to get someone to walk away from the prospect of one job (in this case, U.S. senator) than offering them another one? The only real mystery here is why Sestak -- who's probably better off politically, given the anti-Washington climate -- isn't making more of a fuss about the offer now; that would be bad for the White House, which could look both ineffective and bullying, but it would certainly play up Sestak's anti-establishment credentials. Of course, by the time he realizes that, the 24-hour news cycle will probably have long since rolled along to something newer and frothier.