U.S. demands civilian trials -- except in the U.S. 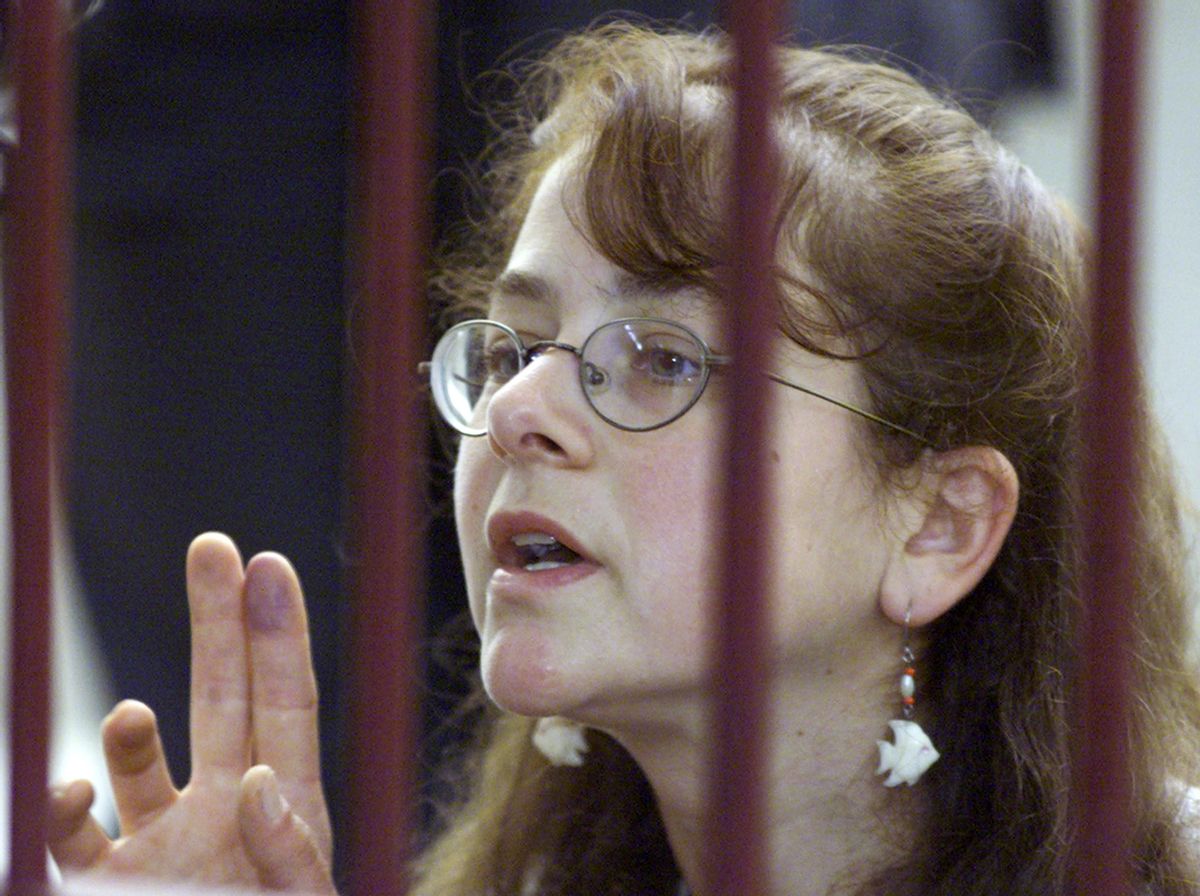 U.S. citizen Lori Berenson, jailed in Peru on terrorism charges, is seen during her trial in Lima in this March 2001 file photo. A Peruvian court granted parole yesterday to Berenson after the U.S. citizen served 15 years of a 20-year sentence in Peru for aiding leftist guerrillas. Berenson could be released from jail on March 26, 2010. Picture taken March 2001. REUTERS/Pilar Olivares/Files (PERU - Tags: POLITICS CRIME LAW) (Reuters)
--

A judge granted parole Tuesday to Lori Berenson, the 40-year-old New York activist who has spent 15 years in Peruvian prisons on a conviction of aiding leftist rebels. . . . Berenson had for many years denied any wrongdoing, maintaining she was a political prisoner and not a terrorist. But her defense team said in papers submitted to the judge that she "recognized she committed errors in involving herself in activities of the MRTA" . . . .

Berenson was arrested in 1995 and initially accused of being a leader of the MRTA, which bombed banks and kidnapped and killed civilians but was nowhere near as violent as the better-known Shining Path insurgency. It is blamed for, at most, 200 killings. . . .

She was convicted of treason by a military court in 1996. But after an intense campaign by her parents. . ., she was retried in a civilian court in 2000.  It convicted Berenson of the lesser crime and reduced her sentence to 20 years. . . . The U.S. State Department had pushed hard for the civilian trial, saying Berenson was denied due process by the military tribunal.

The Obama administration is preparing to revive the system of military commissions established at Guantanamo Bay, Cuba . . . [Attorney General] Holder also announced that five other detainees held at the U.S. military detention facility at Guantanamo Bay, Cuba, will be sent to military commissions for trial. . . . Secretary of Defense Robert Gates has finally signed and issued a Manual for the Military Commissions Act of 2009. It’s 7:30 p.m. as I write this. Approximately 13 and a half hours from now, Col. Pat Parrish, the military judge presiding over Omar Khadr’s pre-trial hearing, will gavel the first full-fledged military commission proceeding of the Obama administration into order.

It's true that the Berenson military tribunal in Peru was filled with due process deficiencies.  That's what happens when governments deny accused Terrorists a trial in a real court, and instead concoct ad hoc military tribunals:  it's inevitable that grave injustices will occur, such as refusing even to provide the rules governing the proceedings until 13 hours before the tribunal begins, as just happened with the child soldier, Omar Khadr, at Guantanamo.  As the Berenson conviction highlights, the U.S. previously protested military tribunals and demanded civilian trials even when it involved a foreign national credibly accused of involvement in a designated Terrorist group (as was true of Berenson in Peru).  Now, we're the ones who deny civilian trials.  We've gone from protesting the "justice system" of the Peruvian authoritarian Alberto Fujimori to (at best) following it.

In other related news, "the White House has been working with Senator Lindsey Graham (R-S.C.) to craft legislation that would restructure the amount of time interrogators can hold suspected terrorists domestically without reading them their Miranda rights."  And the President's top Terrorism advisor, John Brennan, said today that it was both necessary and just that the U.S. hold detainees indefinitely without any charges of any kind -- not even before military commissions, a re-iteration of the Obama administration's previously expressed commitment to indefinite detention.  But that's because, Brennan explained, we're now facing a "new phase" of Terrorism.  Whatever that means, it evidently requires brand new rules of "justice" (Brennan said all that after he beat his chest and bellowed:  "We will destroy Al Qaeda").  Somehow, it was a grave violation of due process for Peru to try accused foreign Terrorists before military tribunals, but not for us to hold them for as long as we want with no charges of any kind.

UPDATE:  For more on what a complete mockery of justice these military commissions have become in general, and the Khadr tribunal specifically is, see Harper's Scott Horton:

The Gates Pentagon prepared the manual for the military commissions completely behind closed doors. It disregarded established procedures under which proposed procedural rules are disclosed for public comment and the views of the military bar itself are explicitly solicited. We now see that it turned to secrecy because it had something to hide: the rules were recognized as flawed and weak even within the Obama Administration, where they were subjected to appropriately sharp criticism. Had they been publicly aired, the Pentagon would have been forced to work out the contradictions in them. But it opted to keep the country and the bar in the dark.

Horton's whole analysis is worth reading.  And remember:  Peru denied due process to Lori Berenson by putting her before a military tribunal rather than a civilian court, just as the U.S. State Department -- in a prior incarnation -- long complained.