Who are the real "crazies" in our political culture? 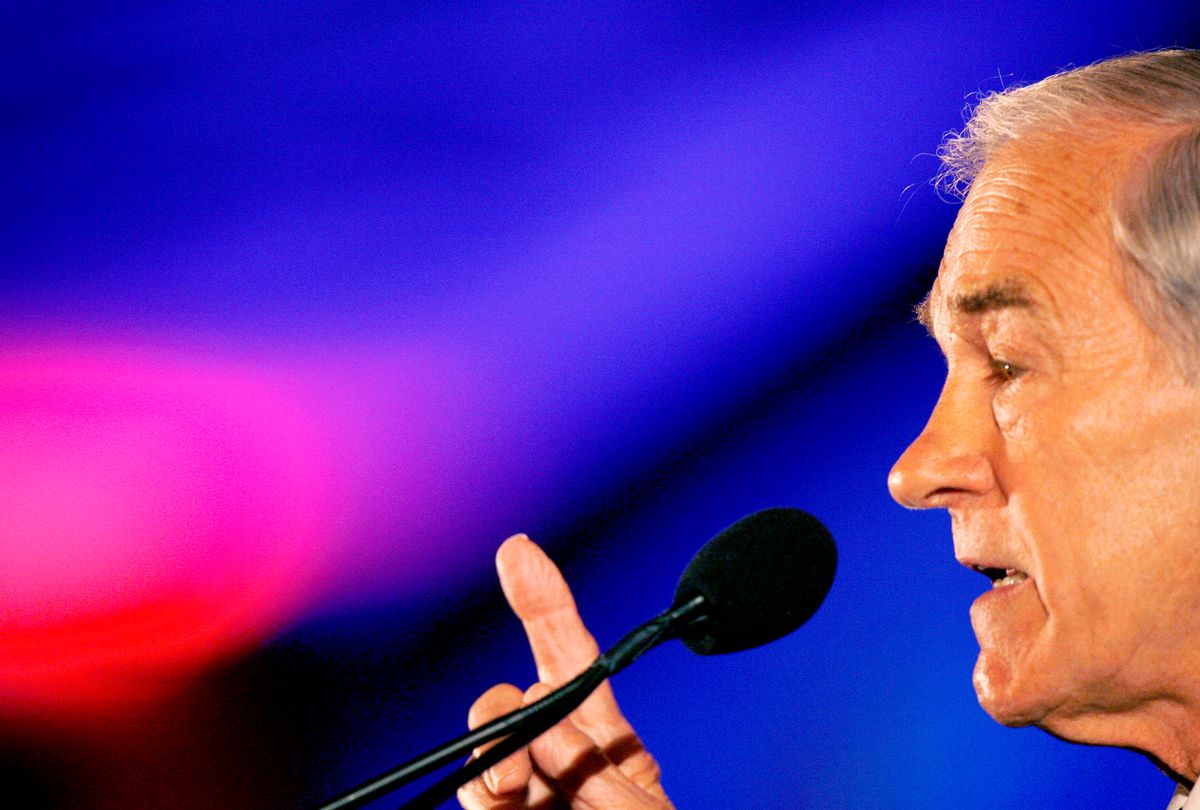 Texas Congressman Ron Paul speaks at the 2010 Southern Republican Leadership Conference in New Orleans, Louisiana April 10, 2010. As many as 3,000 party activists are to attend the four-day Southern Republican Leadership Conference, the most prominent gathering of Republicans outside of their presidential nominating conventions. REUTERS/Sean Gardner (UNITED STATES - Tags: POLITICS) (Reuters)
--

One of the favorite self-affirming pastimes of establishment Democratic and Republican pundits is to mock anyone and everyone outside of the two-party mainstream as crazy, sick lunatics.  That serves to bolster the two political parties as the sole arbiters of what is acceptable:  anyone who meaningfully deviates from their orthodoxies are, by definition, fringe, crazy losers.  Ron Paul is one of those most frequently smeared in that fashion, and even someone like Howard Dean, during those times when he stepped outside of mainstream orthodoxy, was similarly smeared as literally insane, and still is.

Last night, the crazy, hateful, fringe lunatic Ron Paul voted to repeal the Clinton-era Don't Ask, Don't Tell policy (or, more accurately, he voted to allow the Pentagon to repeal it if and when it chooses to) -- while 26 normal, sane, upstanding, mainstream House Democrats voted to retain that bigoted policy.  Paul explained today that he changed his mind on DADT because gay constituents of his who were forced out of the military convinced him of the policy's wrongness -- how insane and evil he is!

In 2003, the crank lunatic-monster Ron Paul vehemently opposed the invasion of Iraq, while countless sane, normal, upstanding, good-hearted Democrats -- including the current Vice President, Secretary of State, Secretary of Defense, Senate Majority Leader, House Majority Leader, the 2004 Democratic presidential nominee, and many of the progressive pundits who love to scorn Ron Paul as insane -- supported the monstrous attack on that country.

In 2008, the sicko Ron Paul opposed the legalization of Bush's warrantless eavesdropping program and the granting of retroactive immunity to lawbreaking telecoms, while the Democratic Congress -- led by the current U.S. President, his Chief of Staff, the Senate Majority Leader, the Speaker of the House, and the House Majority Leader -- overwhelmingly voted it into law.  Paul, who apparently belongs in a mental hospital, vehemently condemned America's use of torture from the start, while many leading Democrats were silent (or even supportive), and mainstream, sane Progressive Newsweek and MSNBC pundit Jonathan Alter was explicitly calling for its use.  Compare Paul's February, 2010 emphatic condemnation of America's denial of habeas corpus, lawless detentions and presidential assassinations of U.S. citizens to what the current U.S. Government is doing.

The crazed monster Ron Paul also opposes the war in Afghanistan, while the Democratic Congress continues to fund it and even to reject timetables for withdrawal.  Paul is an outspoken opponent of the nation's insane, devastating and oppressive "drug war" -- that imprisons hundreds of thousands of Americans with a vastly disparate racial impact and continuously incinerates both billions of dollars and an array of basic liberties -- while virtually no Democrat dares speak against it.  Paul crusades against limitless corporate control of government and extreme Federal Reserve secrecy, while the current administration works to preserve it.  He was warning of the collapsing dollar and housing bubble at a time when our Nation's Bipartisan Cast of Geniuses were oblivious.  In sum, behold the embodiment of clinical, certifiable insanity:  anti-DADT, anti-Iraq-war, anti-illegal-domestic-surveillance, anti-drug-war, anti-secrecy, anti-corporatism, anti-telecom-immunity, anti-war-in-Afghanistan.

There's no question that Ron Paul holds some views that are wrong, irrational and even odious.  But that's true for just about every single politician in both major political parties (just look at the condition of the U.S. if you doubt that; and note how Ron Paul's anti-abortion views render him an Untouchable for progressives while Harry Reid's anti-abortion views permit him to be a Progressive hero and even Senate Majority Leader).  My point isn't that Ron Paul is not crazy; it's that those who self-righteously apply that label to him and to others invariably embrace positions and support politicians at least as "crazy."  Indeed, those who support countless insane policies and/or who support politicians in their own party who do -- from the Iraq War to the Drug War, from warrantless eavesdropping and denial of habeas corpus to presidential assassinations and endless war in the Muslim world -- love to spit the "crazy" label at anyone who falls outside of the two-party establishment.

This behavior is partially driven by the adolescent/high-school version of authoritarianism (anyone who deviates from the popular cliques -- standard Democrats and Republicans -- is a fringe loser who must be castigated by all those who wish to be perceived as normal), and is partially driven by the desire to preserve the power of the two political parties to monopolize all political debates and define the exclusive venues for Sanity and Mainstream Acceptability.  But regardless of what drives this behavior, it's irrational and nonsensical in the extreme.

I've been writing for several years about this destructive dynamic:   whereby people who embrace clearly crazy ideas and crazy politicians anoint themselves the Arbiters of Sanity simply because they're good mainstream Democrats and Republicans and because the objects of their scorn are not.  For me, the issue has nothing to do with Ron Paul and everything to do with how the "crazy" smear is defined and applied as a weapon in our political culture.  Perhaps the clearest and most harmful example was the way in which the anti-war view was marginalized, even suppressed, in the run-up to the attack on Iraq because the leadership of both parties supported the war, and the anti-war position was thus inherently the province of the Crazies.  That's what happens to any views not endorsed by either of the two parties.

Last week in Newsweek, in the wake of the national fixation on Rand Paul, Conor Friedersdorf wrote a superb article on this phenomenon.  While acknowledging that Rand Paul's questioning of the Civil Rights Act (and other positions Paul holds) are "wacky" and deeply wrong, Friedersdorf writes:

Forced to name the "craziest" policy favored by American politicians, I'd say the multibillion-dollar war on drugs, which no one thinks is winnable.  Asked about the most "extreme," I'd cite the invasion of Iraq, a war of choice that has cost many billions of dollars and countless innocent lives. The "kookiest" policy is arguably farm subsidies for corn, sugar, and tobacco -- products that people ought to consume less, not more. . . .

If returning to the gold standard is unthinkable, is it not just as extreme that President Obama claims an unchecked power to assassinate, without due process, any American living abroad whom he designates as an enemy combatant? Or that Joe Lieberman wants to strip Americans of their citizenship not when they are convicted of terrorist activities, but upon their being accused and designated as enemy combatants?

He goes on to note that "these disparaging descriptors are never applied to America's policy establishment, even when it is proved ruinously wrong, whereas politicians who don't fit the mainstream Democratic or Republican mode, such as libertarians, are mocked almost reflexively in these terms, if they are covered at all."  Indeed, this is true of anyone who deviates at all -- even in tone -- from the two-party orthodoxy, as figures as disparate as Dennis Kucinich, Noam Chomsky, Howard Dean or even Alan Grayson will be happy to tell you.

The reason this is so significant -- the reason I'm writing about it again -- is because forced adherence to the two parties' orthodoxies, forced allegiance to the two parties' establishments, is the most potent weapon in status quo preservation.  That's how our political debates remain suffocatingly narrow, the permanent power factions in Washington remain firmly in control, the central political orthodoxies remain largely unchallenged.  Neither party nor its loyalists are really willing to undermine the prevailing political system because that's the source of their power.  And neither parties' loyalists are really willing to oppose serious expansions or abuses of government power when their side is in control, and no serious challenge is therefore ever mounted; the only ones who are willing to do so are the Crazies.

Thus, for the two parties to ensure that they, and only they, are recognized as Sane, Mainstream voices is to ensure, above all else, the perpetuation of status quo power.  As Noah Millman insightfully pointed out this week, those on the Right and Left devoted to civil liberties and limitations on executive power find more common cause with each other than with either of the two parties' establishments.  The same is true on a wide array of issues, including limitations on corporate influence in Washington and opposition to the National Security State.

That's why the greatest sin, the surest path to marginalized Unseriousness, is to stray from the safe confines of loyalty to the Democratic or Republican establishments.  To our political class, Treason is defined as anyone who forms an alliance, even on a single issue, with someone in the Crazy Zone.  That's because breaking down those divisive barriers can be uniquely effective in enabling ideologically diverse citizens to join together to weaken power factions, as Alan Grayson proved when he teamed up with Ron Paul to force the uber-secret Fed to submit to at least some version of an audit (backed by several leading progressives joining with Grover Norquist and other Crazies to support it), or as Al Gore proved when he brought substantial attention to Bush's war on the Constitution by forming an alliance with Bob Barr and other right-wing libertarians.  Preventing (or at least minimizing) those types of ad hoc alliances through use of the Crazy smear ensures a divided and thus weakened citizenry against entrenched political power in the form of the two parties.  Obviously, the more stigmatized it is to stray from two-party loyalty, the stronger the two parties (and those who most benefit from their dominance) will be.

If one wants to argue that Ron Paul and others like him hold specific views that are crazy, that's certainly reasonable.  But those who make that claim virtually always hold views at least as crazy, and devote themselves to one of the two political parties that has, over and over, embraced insane, destructive and warped policies of their own.  The reason the U.S. is in the shape it's in isn't because Ron Paul and the rest of the so-called "crazies" have been in charge; they haven't been, at all.  The policies that have prevailed are the ones which the two parties have endorsed.  So where does the real craziness lie?

Just to preempt non sequiturs, this isn't a discussion of Ron Paul, but of the irrational use of the "crazy" accusation in our political discourse and the effects of its application.

UPDATE:  I'll try this one more time:  for those wanting to write about all the bad things Ron Paul believes, before going into the comment section, please read and then re-read these three sentences:

There's no question that Ron Paul holds some views that are wrong, irrational and even odious. But that's true for just about every single politician in both major political parties . . . My point isn't that Ron Paul is not crazy; it's that those who self-righteously apply that label to him and to others invariably embrace positions and support politicians at least as "crazy."

This is a comparative assessment between (a) those routinely dismissed as Crazy and (b) the two party establishments and their Mainstream Loyalists who do the dismissing.  Assessing (a) is completely nonresponsive and irrelevant without comparing it to (b).

UPDATE II:  One other point:  intense, fixated mockery of marginalized, powerless people has the benefit of distracting attention from the actions of those who are actually in power.