Talking about Israel with Eliot Spitzer on MSNBC 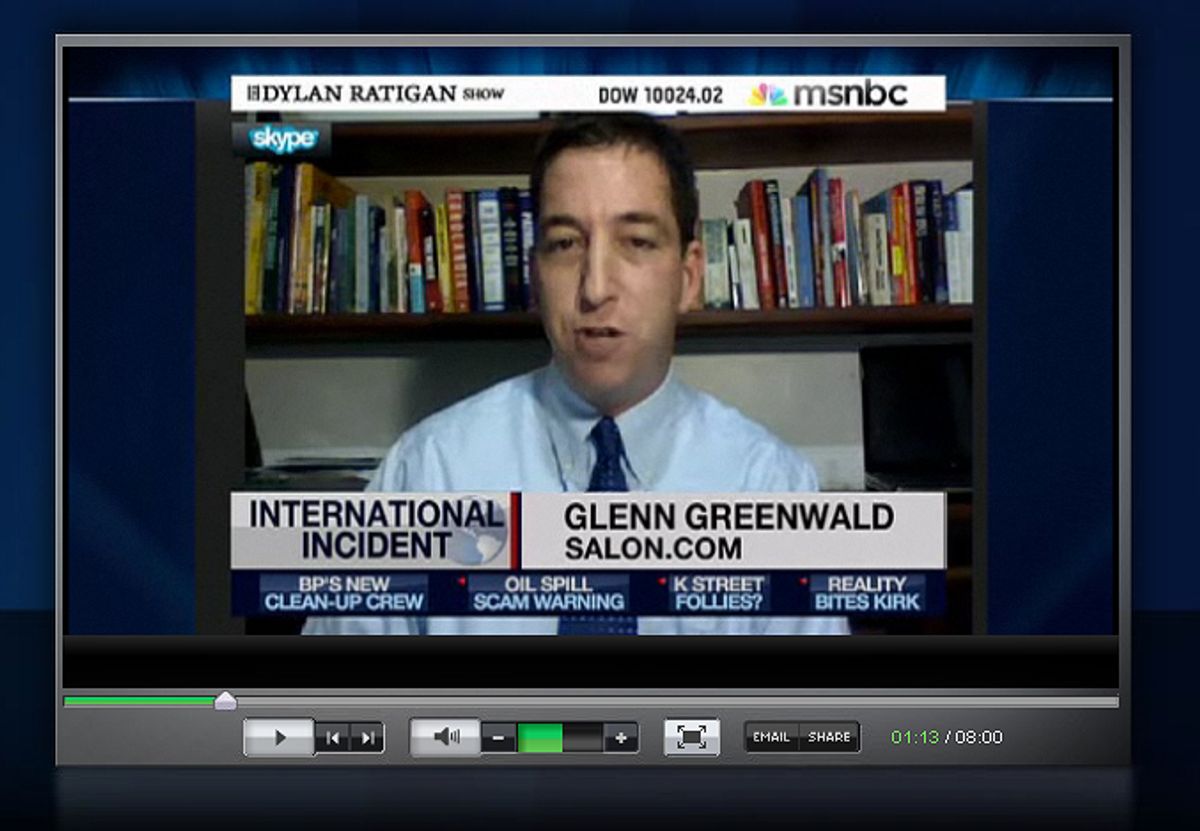 I was just on MSNBC talking about Israel, the Gaza blockade and the flotilla attack with Eliot Spitzer, who was guest-hosting for Dylan Ratigan.  It was a rather contentious discussion, though quite illustrative of how Israel is (and is not) typically discussed on American television, so I'm posting the whole 8-minute segment below.  Two points:  (1) before I was on, Spitzer had on an Israel-defending law professor, followed by Netanyahu's former Chief of Staff, and both of them (along with Spitzer) were spewing pure Israeli propaganda in uninterrupted and unchallenged fashion; at the end of Spitzer's discussions with them, he asked them to "stick around just in case," and once I was left, he brought at least one of them back on to respond to what I said without challenge; (2) literally 90 seconds before my segment was about to begin, the new cam and sound system I just acquired stopped working, forcing me to unplug everything and use only my laptop cam and mic, which caused the technical aspects to be less than ideal (though still perfectly workable); to watch in full screen, click play, then click in the lower right hand corner of the picture and select "option":

UPDATE:  Just to give the context, this was the five-minute, propaganda-suffused segment with former Netanyhau Chief of Staff George Birnbaum to which I listened before my segment began.

UPDATE II:  A few worthwhile related items:  (1) for an excellent discussion of the illegality of the Israeli raid, see this analysis from former British Ambassador and maritime law expert Craig Murray, and this one from International Law Professor Kevin Jon Heller (the Post has a decent article on this topic today as well); (2) Amos Oz, the Israeli writer who supported the Israeli attacks on both Lebanon and Gaza (though he changed his mind about the former), has a very good Op-Ed in the NYT today on what Israel has become; and (3) the Post's Ann Telnaes has an incisive cartoon about this situation (and note the towels).

UPDATE III:  Barney Frank -- unlike Anthony Weiner, Jerry Nadler, Spitzer, and a whole slew of other Jewish progressives vehemently defending Israel -- demanded an independent inquiry and had some rather harsh words for Israel today:  "as a Jew, Israeli treatment of Arabs around some of the West Bank settlements makes me ashamed that there would be Jews that would engage in that kind of victimization of a minority."