Will Tarantino direct "The Hobbit"?

With Guillermo del Toro no longer at the film's helm, we look at who might replace him -- and who should 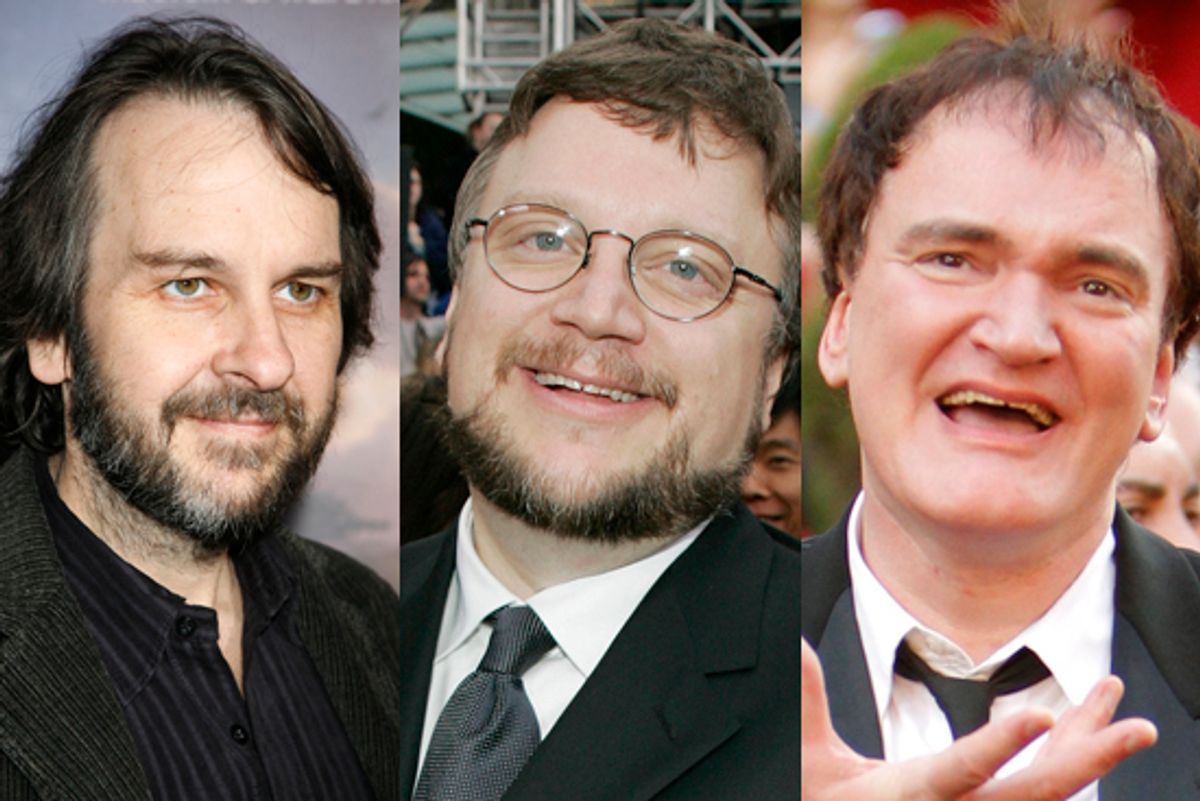 Here's what Guillermo del Toro told me four years ago, in an interview at Cannes after the premiere of "Pan's Labyrinth": "I don't like little guys and dragons, hairy feet, hobbits -- I've never been into that at all. I don't like sword and sorcery, I hate all that stuff."

Yes, consistency is the hobgoblin of little minds, but maybe del Toro should have stuck with that view all along. Two years after rearranging his family life and career and putting about a dozen other films on hold to move to New Zealand and direct a two-part adaptation of J.R.R. Tolkien's "The Hobbit" for Peter Jackson, del Toro has now officially quit the project. Or semi-officially but not quite totally quit the project; he's still listed as a co-writer, along with Jackson, Fran Walsh, Philippa Boyens and whoever else is hanging around the production offices in Wellington.

As Steven Zeitchik explains in the Los Angeles Times, this is more a matter of Wall Street fallout and the uncertain future of MGM (which holds the rights to "The Hobbit") than "creative differences." Despite vigorous denials from all concerned, the tormented and tortuous effort to film Tolkien's "Lord of the Rings" prequel is clearly in jeopardy of collapsing altogether -- as other MGM films, including the next James Bond feature, already have. The current incarnation of the long-troubled MGM is buried under almost $4 billion in corporate debt and is for sale, presumably at a bargain-basement price. Until that situation is resolved, there will be no start date for "The Hobbit," which was supposed to begin shooting later this year, during the Southern Hemisphere summer.

I was skeptical about this whole "Hobbit" thing from the beginning; I think it was a cul-de-sac in del Toro's career path, and he's better off developing his own projects. Personally, I'd much rather see his grotesque fairy-tale vision applied to such proposed ideas as new adaptations of "Frankenstein" or "Dr. Jekyll and Mr. Hyde" or Roald Dahl's "The Witches." I'd gladly give up the "Hobbit" movie forever, in fact, if it meant getting to see del Toro's hypothetical versions of H.P. Lovecraft's "At the Mountains of Madness," or Marvel Comics' "Doctor Strange." (You can't accuse the guy of lacking ideas, ambition or a work ethic.)

But let's play along with the Internets, people. Presuming MGM, Warner Bros. and Peter Jackson are telling the truth about the current situation, they're going to hire a new "Hobbit" director forthwith. It has to be somebody who seems capable of handling epic fantasy, obviously -- but also somebody who doesn't mind being the second choice (if not third or fourth choice) and who doesn't have much to lose in taking on a project with a 50 percent probability of total implosion and a 100 percent probability of relentless scrutiny from blogging Elves, Dwarves and Goblins. Let's review the leading candidates. Chime in, please!

Peter Jackson -- Could the "Lord of the Rings" director be "pulling a Leno," in the Twitter-phrase of indieWIRE's Eric Kohn? Signals vary. Jackson's manager told Entertainment Weekly that directing "The Hobbit" is "not something he can consider at this time as he has other commitments to other projects," which comes under the heading of a non-denial. Over the weekend Jackson told the Dominion Post, a New Zealand newspaper, that taking the reins himself was not out of the question: "If that's what I have to do to protect Warner Bros.' investment, then obviously that's one angle which I'll explore."

What all this means in English: Jackson sees himself as a grandiose, Lucas-scale producer these days, and is busy developing two "Tintin" films, with Steven Spielberg directing the first one. (Wake me when that franchise has come and gone, please.) He'd really rather not get his hands dirty on this one, but if the investors insist, he'll direct at least one of the "Hobbit" movies. Fanboys around the globe, needless to say, would explode like the TV commentators in David Cronenberg's "Scanners."

Alfonso Cuarón -- Let's see: He made the best of the Harry Potter movies along with a terrific adult-oriented sci-fi film ("Children of Men"), he's a friend, compatriot and occasional producing partner of del Toro's and he's got the proven creativity and flexibility to work within the Hollywood production system and outside it. He's pretty much the perfect choice, but given the cursed nature of the "Hobbit" project, that means it probably won't happen.

Bill Condon -- Well, the director of "Dreamgirls" and "Gods and Monsters" has long been an odd duck in Hollywood, beloved but somewhat misused. And he was recently hired to direct the 2011 "Twilight" film, "Breaking Dawn," which was pretty weird. That franchise could certainly use an injection of glamour, tragedy and theatricality -- and personally, I'd love to see what Condon would do with "The Hobbit." Won't happen.

Catherine Hardwicke -- Speaking of "Twilight," Hardwicke made the first film in that series much more attractive and ambitious than it might have been, and was rewarded by being fired and replaced by Chris Weitz, which is what Hollywood producers do when they run out of actual ideas (and/or it's raining in Malibu and they can't play tennis). She's got adaptations of "Red Riding Hood" and "Hamlet" in development, which both sound kind of cool, but it's not like she wouldn't bail on that to do "The Hobbit." An outstanding option.

Zack Snyder -- There was a lot of fanboy hate directed at Snyder's screen version of Alan Moore's graphic novel "Watchmen," but you can color me Philistine on this one -- I thought it had terrific darkness and style, and solved some problems with plot and tone in the source material. (I am not arguing it's "better" than the comic, only different, and successful in its own terms. Given the outpouring of rage that would follow, Jackson et al. won't pick Snyder, but he'd be a solid choice.

Chris Columbus -- Yeah, he's a hack. He's also a moneymaker. Director of the first two Potter films and the recent mediocre knockoff "Percy Jackson and the Olympians," Columbus would make the investors sigh with relief, and would allow Jackson and del Toro to check out, physically and spiritually. Movies on this scale are more about making the safe financial play than making the right artistic choice, and you just know this is being talked about. I could write the same entry about Chris Weitz, with different details, so I'm sorry to say we might as well throw his name out there too.

Sam Mendes -- I'm not sure why the English-born director of "American Beauty" and "Revolutionary Road" keeps turning up on the rumor mill; his poetic and rather ponderous aesthetic seems totally wrong for "The Hobbit," but evidently somebody believes he's in the running. It may simply be that MGM hired Mendes to direct the 23rd Bond film, which now appears to be on permanent hold, so he's definitely available. Supposedly Mendes is working on an adaptation of George Eliot's "Middlemarch" right now -- and while I admire that novel and like some of Mendes' films, I suspect I'd rather spend two hours at a Tea Party meeting.

Sam Raimi -- I get all my inside-Hollywood news from indieWIRE blogger Anne Thompson, but I'm going to part company with her here: The director of three "Spider-Man" films and "Drag Me to Hell" is all wrong for the "Hobbit" franchise. No question Raimi is talented and has proven himself with big budgets, but at this point he's become a splashy, frantic, action-oriented filmmaker who's all show and no tell. Given that he was apparently interested before del Toro took the gig, and has no near-term directing jobs locked down after the collapse of Spidey 4, he clearly remains a plausible choice, whether I like it or not.

Julie Taymor -- A legendary creator of stage spectacles whose forays into film have been indifferently received (I haven't seen her upcoming adaptation of Shakespeare's "The Tempest"), Taymor's a strong personality who remains untested with Hollywood-level budgets. She'd be a brave, adventurous choice, exactly the kind of thing Peter Jackson might pursue in a different economy. Not in this one.

Neill Blomkamp -- File under "duh": Blomkamp is the young South African effects wizard and Jackson protégé who made "District 9" on a relatively low budget, released it in the late-summer movie swamp -- and wound up with a major worldwide hit and a best-picture nomination. He'd be the obvious choice, if the whole thing were really up to Peter Jackson. It isn't, and Jackson might have to convince investors he'd direct the film over Blomkamp's shoulder. I have no idea how well Blomkamp knows Tolkien, or whether he's even interested, but the blend of action, humor and drama in "District 9" was promising.

Darren Aronofsky -- From now until the end of time, whenever some big directing job comes open, the one-time indie god of "Requiem for a Dream" and "Pi" will be mentioned. (Wasn't he once going to make a Superman movie?) That doesn't mean it'll ever happen. Maybe the relatively uncomplicated success of "The Wrestler" has changed Aronofsky's reputation as an impresario of doomed projects, but he's still the wrong guy for this movie, or any other that involves a high probability of failure.

Who else do you want to see take this on? Would the Coen brothers cast William H. Macy as Bilbo Baggins, John Goodman as Gandalf and John Malkovich as the great dragon Smaug? Would Michael Haneke stage the whole thing as an enigmatic journey in which the hobbits are plagued by unexplained acts of brutality, and the spiders of Mirkwood triumph in the end? Will Tarantino and Robert Rodriguez turn Bilbo and pals into a posse of shotgun-packin' hobos? Will Andrew Bujalski transform the whole story into a series of indirect but angst-ridden conversations between Bilbo and Gollum, set in city parks, chain stores and coffee shops?