2010: Not the year for party-switchers 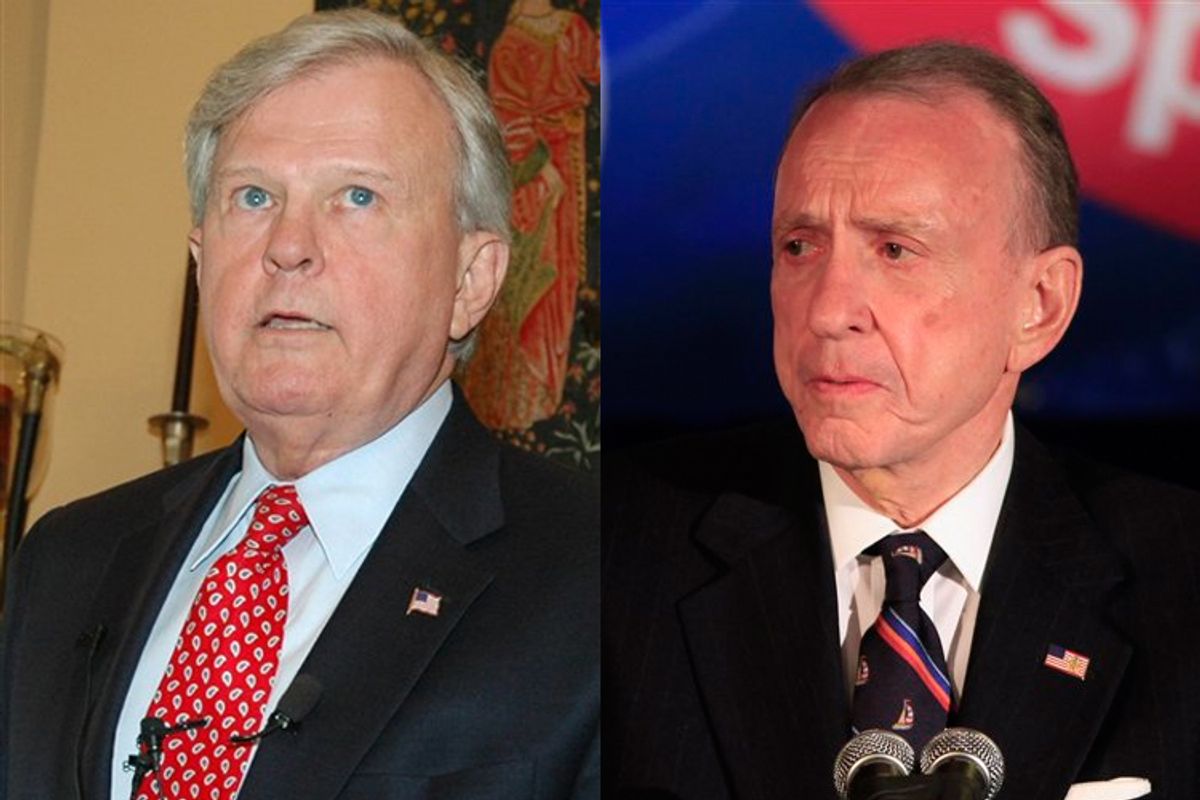 It should have been obvious all along that party-switching Rep. Parker Griffith was heading to defeat in Tuesday's Alabama GOP primary. (And actually, to many Democrats hoping for Griffith to fall, it was.) Politicians have been getting away with jumping from one side of the aisle to the other for a long time -- but 2010 is clearly not the year for it.

Griffith quit the Democratic Party in December, citing healthcare reform -- and a generalized dislike for, oh, pretty much everything the party stands for -- as his reason. The Republican establishment welcomed him with open arms, trumpeting the leap as another good omen for the GOP's November 2010. (Mostly open arms, that is, except when they accidentally attacked him in party-funded mailings.) At the time, Griffith seemed to be making the right move -- Democrats had stalled in their push for the healthcare bill, President Obama (never particularly popular in Griffith's district) was watching his approval ratings plunge and elections the month before had mostly gone well for the GOP. But on the ground back home, activists weren't so quick to get on board. In Madison County, Alabama, the local party endorsed anyone but Griffith in a three-way race. The Tea Party blasted Griffith, calling him a Republican in name only -- which was hard to refute, since he'd only been a Republican for a few months.

The fate Griffith met Tuesday night -- defeated handily, with main rival Mo Brooks winning more than 50 percent even with a third candidate on the ballot -- mirrored what had already happened to Sen. Arlen Specter among Pennsylvania Democrats. Specter switched parties last April, at a moment that seemed as good for Democrats as Griffith's leap seemed bad. Both candidates admitted part of the reason they jumped was to help themselves win reelection, but Specter was more nakedly calculating; he wasn't ready, he said, to let Pennsylvania's conservative GOP primary voters have the final say on whether he would continue to represent the state in the Senate. The conventional wisdom then was that Republican Pat Toomey would have rolled right over Specter in a GOP primary, but that Specter would probably be able to beat him in the general election.

Democrats in the state, though, weren't as easily persuaded. Rep. Joe Sestak resisted establishment efforts to muscle him out of the race (including, yes, by dangling the prospect of some kind of job) and perservered even though longtime donors were advised by power players in the state that they shouldn't give his campaign any money. And lo and behold, on a rainy primary day, Specter lost.

Of course, northern Alabama Republicans don't have that much in common with union activists, liberals and the other die-hard Pennsylvania Democrats who turned out there last month. But what they both do seem to share is an unwillingness to go along with establishment marching orders without question. So far this year, that's been the overwhelming trend -- just ask Charlie Crist or Trey Grayson, chased out or defeated by their party base despite backing from national Republicans, or Sen. Bob Bennett, beaten soundly in Utah's GOP convention before the primary even came along.

So Griffith's loss Tuesday might be troubling for both parties. For Republicans, of course, it's just the latest sign that the Tea Party folks the GOP has been depending on for energy in 2010 might spin farther and farther out of the party establishment's sphere of influence. (And at some point, if your ground troops refuse to take any orders at all, are you really better off having them on your side?)

But for Democrats, who have been cheering Brooks on in hopes of avenging Griffith's betrayal, there's a hidden downside, too. Optimistic strategists in Washington keep saying that the mood in the country isn't anti-Democratic, it's anti-incumbent. Griffith's defeat might prove them right -- and they could still wind up having a brutal Nov. 2. After all, there are far more Democratic incumbents trying to hold onto their jobs this year than Republicans. If voters are really in a "throw the bums out" mood, which Tuesday's result seems to add more evidence is the case, that math adds up to bad news for Democrats down the line.