Where a $40 cocktail is worth it for the theater alone 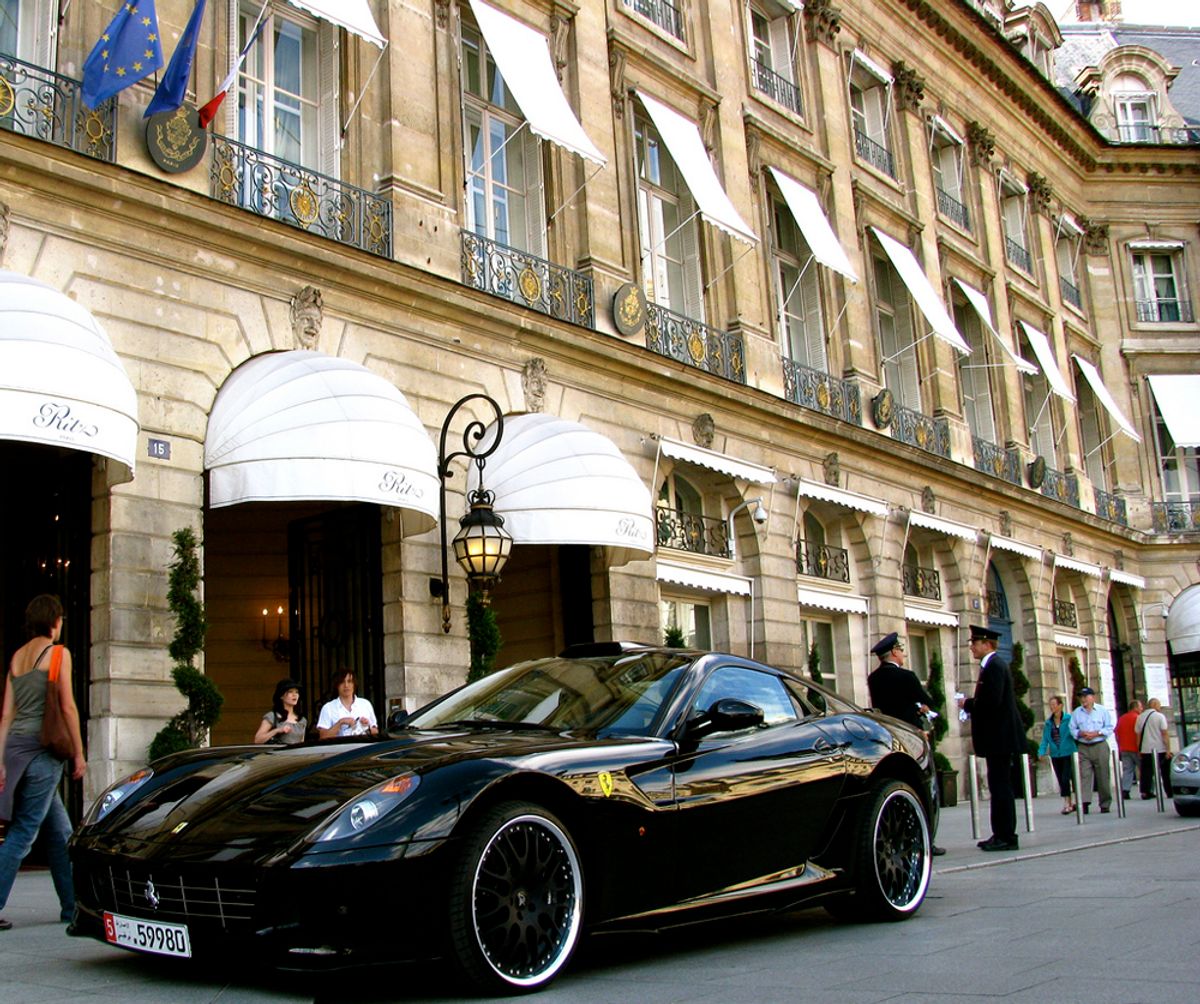 The Ritz in Paris is nearly the definition of fancy. A hotel built literally like a palace, it's where the word "ritzy" comes from, where Auguste Escoffier codified and invented generations' worth of French haute cuisine. Deep inside the hotel, past a hallway of toys for the private-island set, is the Bar Hemingway, a shrine to the original Big Papa's version of American manliness, where his favorite typewriter sits above the fireplace and his hunting rifle hangs above the bar. And hiding in this particular bush with a friend the other night, I spied for myself a rare and elusive species: the Crass Jetsetter (Uglius Americanus).

The room is certainly beautiful -- warmly lit, gorgeous old metals and woods, plush and intimate. But the menu opens curiously. Printed goofily like an old-time newspaper, it features stories describing featured drinks, including "The Best Bloody Mary in the World," yours for only $85. And if you're into wealth-porn enough to flip it over, you'll find novelty cocktails with prices clocking in at the four figures. There's also a note: "This menu available for purchase." I'd heard incredible things about a genius bartender here named Colin, a walking encyclopedia of cocktail history and creativity, so I was confused about the gimmickery that lay before me. But then it occurred to me: The Bar Hemingway is what would happen if the Hard Rock Café managed to knock up an heiress in a library.

And so, despite the handsomely dressed servers and the high-end hush, I was only half surprised to hear a brash voice from the bar: "I love Europe! You can get laid in Europe. And China. In China, you don't even have to wait 'til you get to your hotel. You can get laid in the airport in China."

I turned to see where that nugget of cosmopolitan wisdom came from. A large, 40-ish bald man with a spherical torso was wrapping his lips around potato chips and making conversation with an attractive, country-club-thin woman and her slightly bemused husband. "It's too hard to get laid in America," he continued. "People are too uptight. Why do I spend the weekend in Paris? Because I can. Why does a dog lick his own balls? Because he can. Why would I stay at home in Orange County, where the women want to have sex two times to have two kids and miss Ronald Reagan?"

The woman laughed an expensive, tipsy laugh and visibly enjoyed it when the man continued, "Of course, you're a beautiful blonde. You wouldn't know anything about it being hard to get laid."

The woman said something about Gary Coleman, and the bald man asked the room for a moment of silence for Gary Coleman. I sipped my very pricey apple juice and started to think that I'd done the right thing by coming here.

"What do you mean 'don't be an asholay'?" I heard the woman ask a few minutes later. "What's an asholay?"

The bald man wrote in a legal pad and held up a word: "Assh o le".

"Oooh! Asholay!" the woman blurted, pleased and drunk. "Asholay! I love that. You taught me something! I'll remember that the rest of my life!"

I began to wonder if she would even remember the rest of tonight by tomorrow morning. At some point, the bald man turned and started talking to me and my friend Brandon, asking us why we're in France. We mentioned something about eating, and the woman exclaimed, "I love to eat! Food is my hobby!" and proceeded to name some of the more luxe restaurants in the Western world. "And you know," she said, "Paris is great for food," before launching into a story about getting bad fish at a restaurant called Voltaire and being kicked out when she complained about it. "I said, 'I can smell this fish! It's been dead for hours!' I would know. I've been to ..." and out came more restaurants I've only read about.

"Well, where would you recommend I go for dinner tomorrow?" I finally asked.

She thought for a second. "Oh, go to Voltaire!" she said, her voice lingering deliriously on the last syllable.

"Um, isn't that where you complained about the fish?"

The woman stepped away to the restroom. Before she left, though, she said the words "the French Laundry," and soon the entire bar was in a debate about whether that particular world-class California restaurant had slipped since its sister Per Se opened in New York.

Brandon and I got the check and lightened our bank accounts. As we got up to leave, I heard one more musing from the bald man: "Your wife's been gone a long time. You want to know what I think? I think she's taking a shit."

"I can't believe you're single, Michael," her husband replied.

Walking back home, past couture shirt makers and watch stores where one modest specimen would pay my rent for a year, I wondered what Ernest Hemingway would think of his Parisian legacy. And Brandon said, "Well, my drink was kind of bad. But if I paid that much for a theater ticket the show wouldn't have been nearly as good."