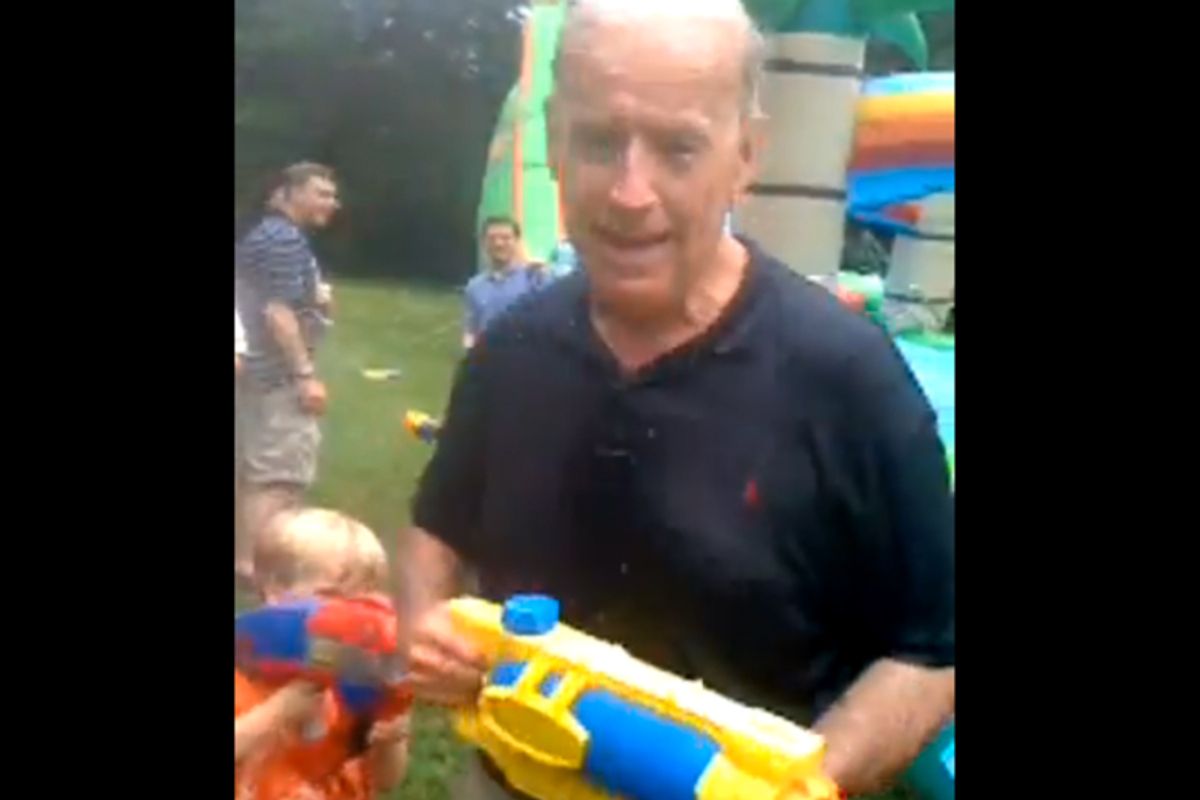 On Friday, CNN's Ed Henry posted a series of giggly, adolescent updates on his Twitter feed, describing the events that took place at a "beach" party thrown by Joe Biden, at the Vice President's mansion, for various "reporters" and White House officials.  Digby excerpted just a sampling of Henry's giddy outburst: 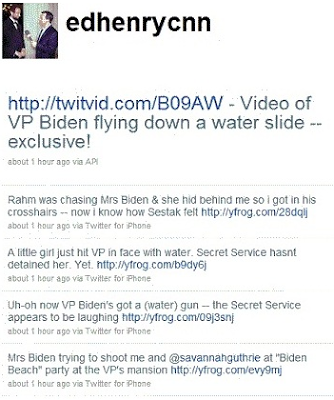 Henry also posted videos and photographs he took of the Vice President and White House Chief of Staff playing with water guns, slides and the White House press corps.

Today, The Atlantic's Marc Ambinder, who often passes along White House thinking under the cover of anonymity, confesses that he, too, attended the water party, and also posted a short video he took of Rahm Emanuel frolicking with a squirt gun along with party participants Wolf Blitzer (the former AIPAC official and current CNN anchor) and The New York Times' David Sanger (who faithfully regurgitates every administration fear-mongering claim regarding the Iranian nuclear program):

About all of this, Ambinder writes:

Does an afternoon of leisure with senior administration officials violate journalistic ethics?  To many, the self-evident answer is: "Absolutely." I have a different view, although perhaps it's a way to rationalize my own decision to attend the Bidens' first beach party for journalists. . . .

Yes, "perhaps."  I personally don't think that these types of interactions "violate journalistic ethics" because I don't think such a thing exists for them.  Rather, all of this just helpfully reveals what our nation's leading "journalists" really are:  desperate worshipers of political power who are far more eager to be part of it and to serve it than to act as adversarial checks against it -- and who, in fact, are Royal Court Spokespeople regardless of which monarch is ruling.  That's why they're invited into the heart of Versailles to frolic with the King's most trusted aides:  it's their reward for loyal service as Court courtiers.  Just marvel at the self-abasing joy in which Ed Henry wallows by virtue of getting to play water sports with Emanuel and the Bidens.  He sounds like a gushing pre-adolescent who just met his favorite boy band idol and got his water gun signed.  Digby asks, quite rhetorically:  "do you think this sort of thing makes it easier or more difficult for journalists to maintain their independence?"

In March, Daily Kos' Susan Gardner highlighted passages from a New York Magazine profile of Liz Cheney which detailed the extensive social relationships between Cheney and all sorts of leading media and political figures, including David Gregory, The Washington Post's Glenn Kessler, former DNC head Terry McAuliffe, and Mika Brzezinski, to whom Cheney sent a box of cupcakes after Brzezinski, on her show, criticized Cheney's father.  About all of that, Gardner wrote:

This idea that the national press corps can cozy up to sources or people in power they cover during afternoon soccer games or over Saturday night dinners, then turn around and hold their feet to the fire is ridiculous. You know it. I know it. Everyone outside of Beltway zip codes knows that. Hell, anyone who's ever tried to challenge a neighbor at a local meeting knows it.

But the Village? Meh. They have their own rules. And cupcakes.

And squirt guns.  Do you think any of those frivolities might temper their desire to expose the war crimes and call for the prosecution of their good friend Liz's dad?  For the same reason, numerous progressives were incensed -- rightfully so -- when John McCain invited the press corps which covered his campaign for a weekend party of wine-drinking, BBQ-ing, and other fun games at his (wife's) ranch in Sedona, Arizona.  I presume everyone will agree that playing water sports with Emanuel and Biden is no less compromising than sipping white wine on McCain's tire swing or extensively socializing with Liz Cheney.

Does one need to wonder why there was no media outcry when Joe Biden dismissed the deaths of numerous civilians at the hands of the Israelis in international waters, including an American citizen, with the obnoxious, Israel-subservient cry:  "So what's the big deal here"?  Who wants to criticize someone who was nice enough to invite you to his beach party and whose wife paid attention to you, established your importance, and gave you self-esteem by chasing you with a water gun?  Why risk not being invited the next time?  Perhaps if Helen Thomas had attended more water park parties with the White House and her fellow reporters, she'd still have her job.  Do you think David Halberstam would have played water sports with Rahm Emanuel and then proudly giggled about it afterward on his Twitter feed:

One of the things I learned, the easiest of lessons, was that the better you do your job, often going against conventional mores, the less popular you are likely to be. (So, if you seek popularity, this is probably not the profession for you.).

There are a few things I would like to pass on to you as I come near to the end of my career.

One: It's not about fame. By and large, the more famous you are, the less of a journalist you are. . . .

Somewhere in there, gradually, but systematically, there has been an abdication of responsibility within the profession, most particularly in the networks. . . . .So, if we look at the media today, we ought to be aware not just of what we are getting, but what we are not getting; the difference between what is authentic and what is inauthentic in contemporary American life and in the world, with a warning that in this celebrity culture, the forces of the inauthentic are becoming more powerful all the time.

I have no doubt that Ambinder -- who promised that "later today, I'll lay out some thoughts about the ethics of all of this" -- is shortly going to explain to us how getting squirted in the face by Rahm (aside from being fun and deeply pleasurable for him) assists his intrepid journalistic endeavors by building relationships and cementing access (he also reported:  "Note, too, that shortly after I shot this video, Emanuel sprayed me in the shirt with his Super Soaker. I have a picture of that, too").  All anyone has to do is to look at the relationship between the Washington press corps and the Washington political power structure (the former is an integral part of the latter) to know what an absurd and false rationalization that is (over the weekend, Ed Henry bravely took time out from his socializing with the Bidens to vehemently condemn the powerless Helen Thomas with language he would never, ever use for powerful political officials).  The face of the Washington press corps and the role it plays is perfectly embodied by David Gregory's dancing to Karl Rove's tune (both literally and in every other way), and it only gets worse by the day:

The platitude teaches that power corrupts, but so, too, does faithfully serving power and reaping its trivial though ego-building rewards (Jill Biden hid behind me while Rahm tried to shoot us with a squirt gun!!!!!!).

UPDATE:  As for the Helen Thomas condemnation fest and subsequent resignation today, the central issue -- as both my Salon colleague Gabriel Winant and The American Prospect's Adam Serwer adeptly document -- is not the perception that she's guilty of bigotry, but the wrong kind of bigotry.  Anyone who doubts that should compare the cheap, easy and self-righteous outrage orgy against the powerless, 89-year-old columnist to the total non-reaction in the face of the incessant and ongoing anti-Arab bigotry of The New Republic's Marty Peretz, or to the demands of then-House Majority Leader Dick Armey that the Palestinians leave the West Bank and go back to where they came from, and similar statements from Mike Huckabee (still gainfully employed at Fox News).

That's because, as I wrote the last time Peretz had one of his vicious anti-Arab rants, severe punishment is meted out to those who engage in the wrong kind of prejudice while those who spout the right kind do so with total impunity.  That, and the fact that there are consequences for the actions only of the powerless in Washington, but never the powerful.  Then again, look at the bright side:  with Thomas banished, White House press briefings and presidential news conferences will be much friendlier and more harmonious with the amiable, star-struck Ed Henrys remaining in place.

UPDATE II:  Ambinder has posted his explanation/justification here, and, as it speaks (loudly and clearly) for itself, I'm content to let everyone read it and decide for themselves what they think.  To be clear:  the issue isn't Ambinder, who does some good reporting and deserves credit for candidly writing about these events even knowing he'll be criticized (that's better than concealing them).  The issue is the relationship between the press corps and political power which these events reveal (here's an example of the type of event the Bush White House would hold and the controversy created).  Along those lines, The Washington Post's Dana Milbank has a surprisingly decent column about Helen Thomas in which he writes:

Yet the White House press corps will be diminished without Helen front and center, and not only because she was in that job before the current president was born. She brought a ferocity to her questioning that has eluded too many in subsequent generations. At a time when others were getting cozy with sources, her crabby, unrelenting hostility was refreshing. . . . Now that Helen is gone, there's more need than ever for others in the briefing room to share her opinion -- specifically, the opinion that anybody standing on that podium should be regarded with skepticism.

Her career-ending comments to the side, we need far more Helen Thomases in the press room and far fewer giggly, star-struck servants who are so grateful and honored to participate in circle squirts with White House officials and not even embarrassed to admit it.