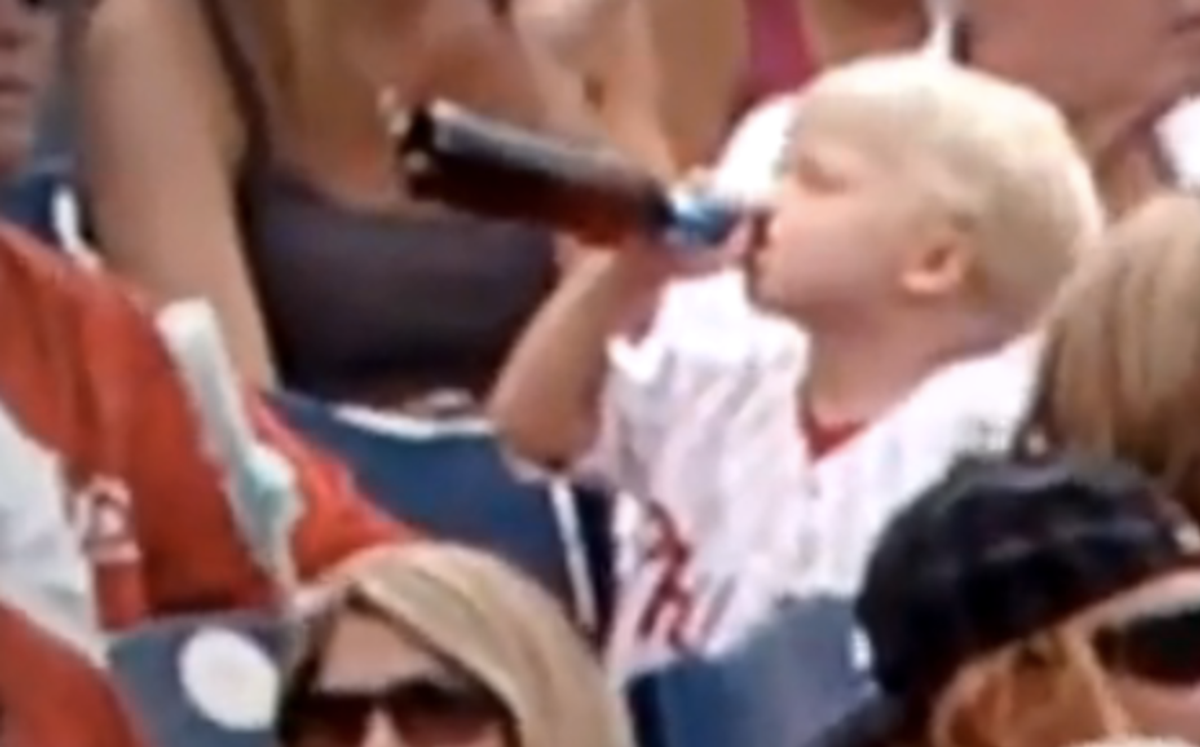 The "drinking toddler" is the latest in a long line of dubious Phillies fan acheivements.
--

Displaying a passion for their game and an unparalleled gift for disregarding law, decorum and common sense, Philadelphia sports fans truly are a breed apart. These, after all, are the people for whom the phrase "the 700 level at Veteran's stadium" is proud shorthand for behaving like you're at the sacking of Rome. Philadelphia's hockey lovers will boo Sarah Palin, and their armchair quarterbacks will throw snowballs at Santa Claus. But it's their baseball aficionados who really know how to bring it, maniacs-in-the-stands style. Their team may have lost the 2009 World Series (PS: New York says, IN YOUR FACE) but the Phanatics will always be  winners in our hearts.

Their latest contribution to the canon of poor judgment comes to us via Phillies fan blog thefightins.com, which culled this clip from Sunday's Padres game of a young -- like, diaper-age young -- fan taking a generous swig from a beer bottle. That Phillies jersey on the kid's back tells us he's not from San Diego. Who says you need to go to Indonesia for a parenting fail?

But Phillies fans don't just flout the rules inside the stadium. Back in October, "desperate blonde" fan Susan Finkelstein went on Craigslist begging for World Series tickets, noting, "I'm the creative type! Maybe we can help each other!" When she met up with an undercover Bucks County special investigations police officer soon after, she allegedly offered to perform sex acts for him -- and his brother -- for tickets. Creative indeed.

Then in April, another creative fan, Cherry Hill's own Matthew Clemmens, got a little boisterous during a Nationals game. At first it was just a little cursing. Then, after the people in front of him -- including an off-duty police officer -- began complaining, it escalated to spitting. Finally, Clemmens decided to really go for it and stuck his fingers down his throat, aiming a torrent of barf on the cop -- most of which landed on the officer's 11-year-old daughter. Clemmens was arrested and charged with simple assault, aggravated assault, harassment and resisting arrest. The intended vomit victim, officer Michael Vangelo, later told the Philadelphia Daily News, "It was the most vile, disgusting thing I've ever seen, and I've been a cop for 20 years."

And then there's this genius:

In May, during the eighth inning of the Phillies-Cardinals game, 17-year-old fan and soon-to-be Penn State freshman Steve Consalvi told his father, "This would be a once in a lifetime experience!" before running out onto the field. Now, Consalvi can also cross "getting tasered by the cops" off the bucket list, too.

We know every town has its knuckleheads, and the City of Brotherly Love has more than its share of uncrazy people, too. But frankly, when we're in the mood to watch a baseball fan do something spectacularly stupid, on the whole, we'd rather be in Philadelphia.