Why does Wall Street hate America (in the World Cup)?

Goldman Sachs, UBS and JP Morgan all predict a quick exit for the U.S. in the big soccer tournament 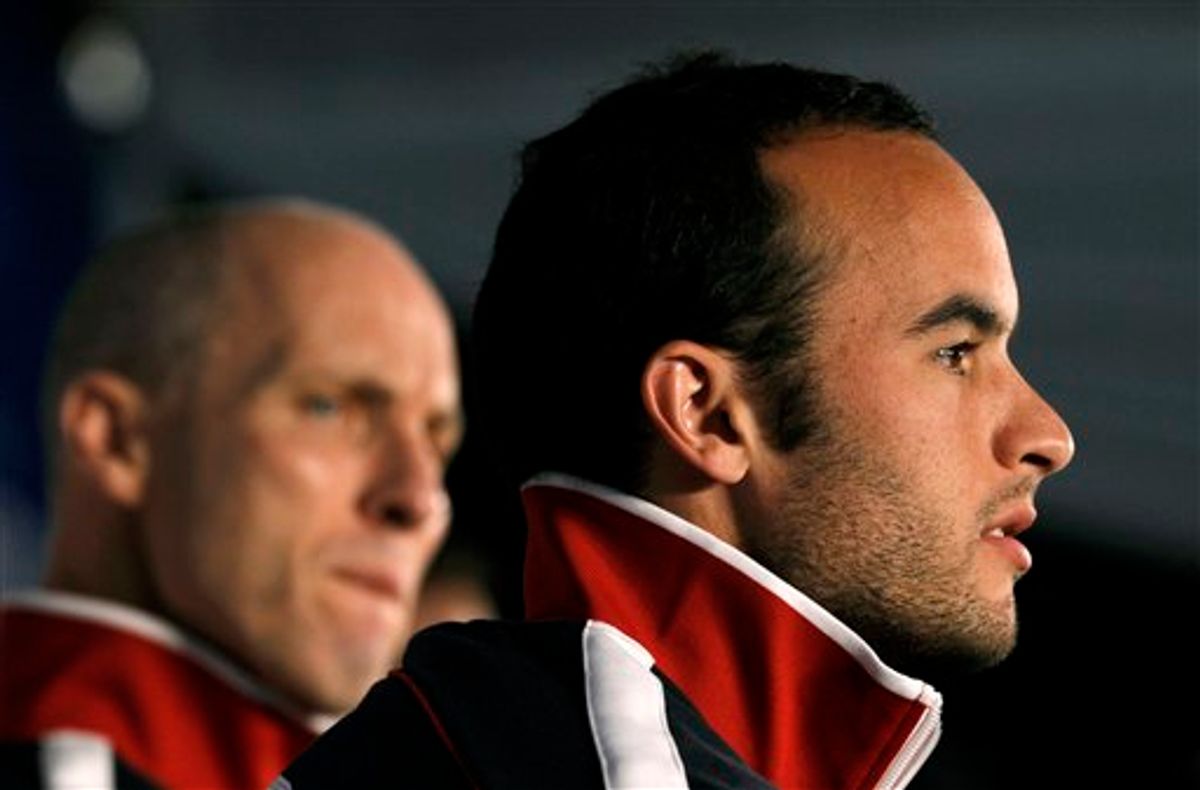 Destroying the global economy and plunging the world into recession is one thing. But now Wall Street has gone too far.

Preparing for the World Cup, three big banks issued data-heavy reports predicting which nation will bring home the trophy (Update: That trophy is no longer named for Jules Rimet, as this post originally stated): UBS, JP Morgan and Goldman Sachs. And none of them show much love to the United States -- no matter how much Washington has agreed to help them stay on top of global commerce in the wake of the economic collapse.

The recipient of $25 billion in TARP funds in 2008, Morgan is by far the worst offender. Its guide to the tournament, produced by the bank's "quants" (yes, that's the same term used for the math wizards whose models utterly failed to predict the collapse of the housing market), expects the U.S. to lose to England on Saturday, follow that up with a loss to unheralded Slovenia on June 18, then finally salvage some pride with a win over Algeria on June 23 -- which would be too little, too late to advance to the tournament's knockout stage. And just like that, the Yanks would head home, losers, along with the likes of New Zealand, Paraguay and North Korea.

Goldman's team, in its report (PDF), wasn't that much more generous to the nation that's treated the firm so well over the years. "Group C looks very friendly to England, and in an effort to help boost the game in the U.S., let's assume they come second!" the Goldman analysis says. "Both Algeria and Slovenia may have good grounds to question this." In other words, the bank doesn't really expect the U.S. to advance to the round of 16, but since this whole thing is just a silly exercise designed to get them publicity (you're welcome, Goldman), the writers threw U.S. Soccer a bone. Then again, while Goldman did get $10 billion in TARP funds a couple of years ago to stay in business, it's had a more tumultuous relationship with the government since then. Maybe if the SEC hadn't sued the bank, they would have picked the U.S. to win it all!

Meanwhile, the Swiss bankers at UBS -- who didn't take any money from the U.S. government (but did get a bailout from their own taxpayers) -- appear to predict that the U.S. will, at least, advance from the group stage to the single-elimination round. (Though only barely, and their chart ranks South Africa, Mexico, France and Uruguay -- who can't all make it, because only two teams from their common group will advance -- as likelier to move on.) But they give the U.S. less than a 13 percent chance of winning their first knockout game, in which the Americans would likely face Germany.

Yes, I realize I'm taking these predictions more seriously than they're intended to be taken, and that the reports are -- as you might expect for a research document prepared by investment firms -- larded up with disclaimers about past performance and statistical models being no guarantee of future returns. Still. This is the World Cup! It's serious business! And for these Wall Street bankers to blithely write off the U.S. cause as hopeless -- or worse, as Goldman does, a charity case -- is downright un-American.

So if they don't like America, which nation's citizens do these cold-hearted bankers think will be dancing in the streets after the July 11 finals? UBS picked Brazil, five-time winners already. Goldman put Brazil in the final -- but in a rare nod to style over mathematical models, picked Spain to beat them: "Here we are going to go against history and stick with flair." And JP Morgan, picking Slovenia to make it all the way to the semifinals after edging out the U.S. for a spot in the knockout rounds, predicts England will beat Spain -- on penalties -- for its second-ever World Cup title. (For what it's worth, I don't expect the U.S. to win the tournament; I do expect them to advance to the second round, behind England, and maybe win another game if they get lucky. Spain will probably win, which would be fine with me, but I'm really rooting for Argentina, and I wouldn't mind the Netherlands winning, either.)

These reports, then, should give anyone in America plenty of motivation to watch the U.S.-England game on Saturday: Not only is the U.S. the underdog, but Wall Street is rooting for the English. No, an upset win this weekend won't fix the economy and undo the damage years of corporate influence have had on our politics. But it might help humble some smug bankers somewhere. And if that's not a victory, what is? U.S.A.! U.S.A.!