Does the world need another "Karate Kid"? 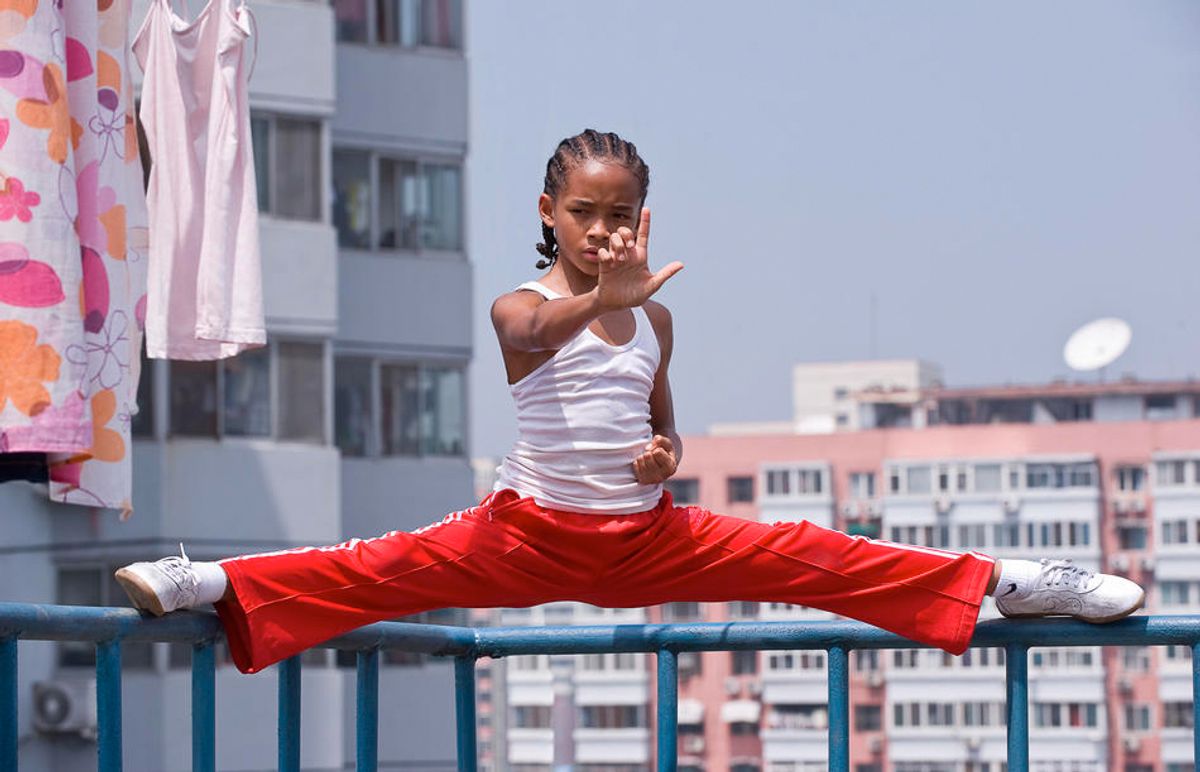 In an age when we think of bullying as something that happens on Facebook, director Harald Zwart's reimagining of the '80s teen classic "The Karate Kid" seems almost old-fashioned. In this world, kids don't carry cellphones, they don't talk smack on each other's MySpace pages — they just beat the living hell out of each other.

This suspension of technological disbelief is abetted by the fact that the action takes place in Beijing, where 12-year-old Dre Parker (Jaden Smith, filling the role that made Ralph Macchio a star) and his widowed mom have moved to start a new life. On his first day in town, Dre chats up a pretty classmate and manages to piss off the wrong gang of thugs from the Show No Mercy Academy for Young Psychopaths. And the hits just keep coming. In the film's slow-building early scenes, Dre alternates between stoic misery, genuine terror and pitching tantrums to his mom like the child he still is. It's only after his building's grumpy super Mr. Han (Jackie Chan) jumps into the fray while he's receiving a particularly brutal pummeling that Dre begins to bloom. If that weird old guy can manage those cool moves, how hard can it be?

What follows next will come as no surprise to anyone who's seen the 1984 original — or any other movie, ever. The cocky student will learn respect for his new discipline, the gruff master will soften, and the finale will consist of a tournament between the hotshot kid and the bully ringleader. But first, a training montage.

Clocking in at nearly two and a half hours, the movie's a test of even adult endurance. Chan doesn't open up his first can of whupass until we're past the one-hour mark. And did we mention the cavorting-around-Beijing montage? At times, the movie feels less like a coming-of-age tale and more like an extended promo for the Chinese tourism bureau.

Moving the action to the Far East does have its advantages, however. Dre's utter isolation feels more authentic, and the images — from a dreamy mountaintop monastery to the Great Wall to a chase across the Hutong rooftops to a sea of red-robed kids — are pretty damn breathtaking.

But more than the scenery, the chemistry of the two leads is the film's greatest strength.

Of all the adjectives generally applied to Jackie Chan, "subtle" ranks low on the list. Yet here, the 56-year-old star gives a suitably slowed-down performance as the taciturn martial arts mentor — while still managing to prove he's got plenty of ass kicking left in him. And he couldn't have picked a better kid to pass the karate on to than Jaden Smith, who already bears much of the relaxed charisma of his superstar dad Will. Credit to the film's writers, Christopher Murphey and Robert Mark Kamen, who kept enough of the original's beloved hokey moments to please even the most nostalgic of Gen Xers. The master spouts fortune cookie aphorisms like, "You see only with your eyes, so you're easy to fool" and "Best fights are the ones we avoid." The final match is practically a shot-for-shot redo of its predecessor.

Does the world need another "Karate Kid," especially one this bloated and occasionally violent? Probably no more than it needed the first one. But there's something almost guileless about both, with their simple message of hard work, respect and not being a jerk. It was resonant in the gung-ho '80s, and it's a notion every generation deserves to discover anew. Based on the young Smith's considerable wattage, this "Kid" may just surpass the original.