This week in crazy: Katy Perry

The foxy, mega-successful pop singer is on top of the world. So why is she taking a lame swipe at Lady Gaga? 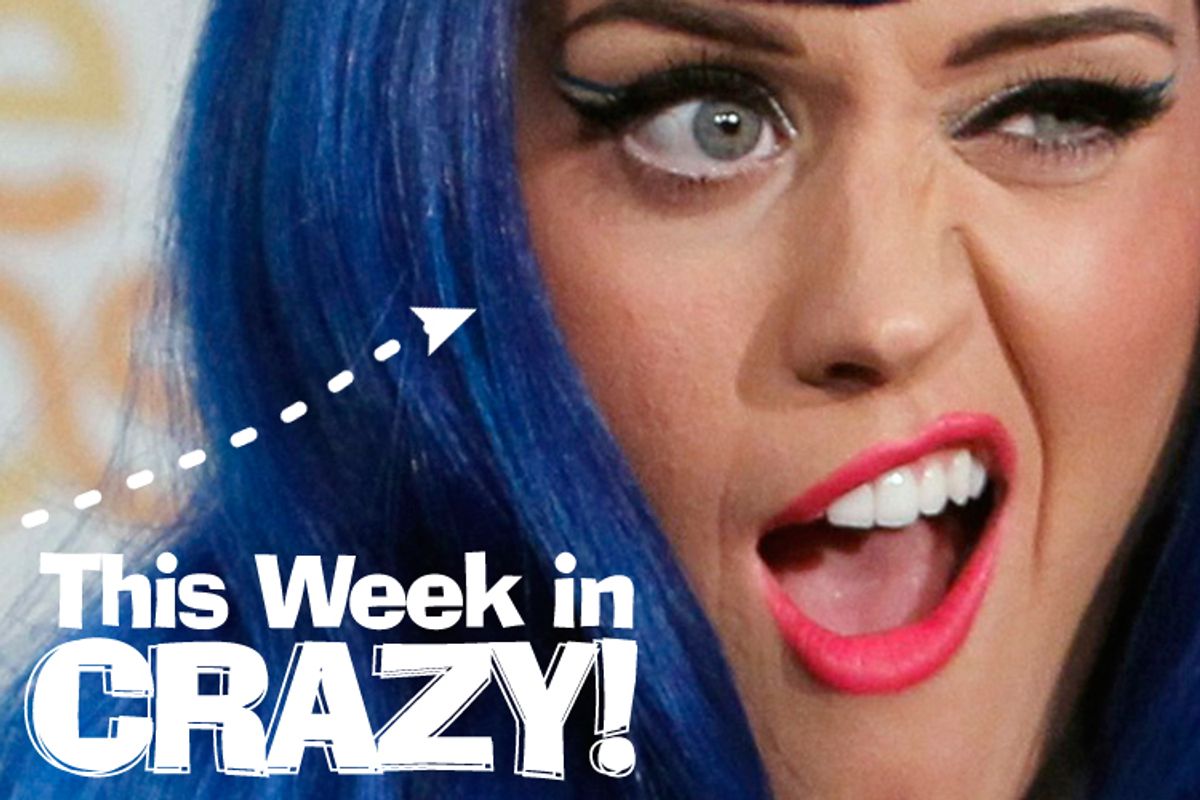 You've got the No. 1 song in the country with "California Gurls," the undisputed, inescapable summer anthem. You rocked the MTV Movie Awards in a blue wig and the world's greatest cleavage. (By the way, thank you.) Your fiancé is starring in a hit movie. You're on the top of the world, Katy Perry. In fact, there's probably only one other star in the galaxy whose current illumination matches your own.

And so it came to pass that in the same week she utterly dominated pop culture, the 25-year-old hottest woman in the world took what sure looked like a swipe at the competition, tweeting that "using blasphemy as entertainment is as cheap as a comedian telling a fart joke."

Why, whomever could you be referring to, California Gurl? Your husband-to-be Russell Brand, who dressed up as Osama bin Laden — on Sept. 12, 2001? Considering that your bird's-nest-tressed beloved did just call you "a flatulence factory," that may explain the latter part of the gibe. But what of the former? Blasphemy ... blasphemy ... Say, didn’t Lady Gaga release a new video this week? And isn't it chock-full of nun's habits and rosary beads and more shirtless gay men than go-go night at the Endup?

With Perry's shot, even atheists started praying for the mother of all catfights, initiating a "feud" that left media outlets as respectable as the Wall Street Journal and Los Angeles Times gleefully rubbing their palms.

Perry, who started her career as a Christian singer before turning poster girl for the bi-curious with her hit "I Kissed a Girl," is the daughter of two Christian ministers. And though she seems to have left her devout upbringing behind, it would appear she still doesn’t take messing around with the Lord's iconography lightly.

A lady's entitled to her opinion, especially when it comes to something as personal and serious as religious beliefs. But Jesus, Katy, if you have something to say, own it. Don't go the "didn't return calls for comment" route. The veiled tweet is the lamest gambit in social media, which is quite an accomplishment in a medium that is composed almost entirely of lame. You don't like Lady Gaga's new "Alejandro" video? Spit it out. Don't lob a grenade and then retreat to gushing about the awesome macaroons in your hotel room. Do we have to send Courtney Love over to show you how to fight?

The oddest thing about Perry's whole cryptic, schoolgirlish "SOME people are so CHEAP" gambit is simply why she did it in the first place. Taking potshots at other artists and not even being open about it? And when you're at the apex of your career, having the kind of week other doe-eyed kewpies only dream of? Now that's cheap. But it's more than that. Speaking to "Access Hollywood" this week, she said of her relationship with Russell Brand, "We’re just crazy enough for the both of us." Oh Katy, you passive-aggressive nut job, you're crazy enough for all of us.