Rep. Bob Etheridge should be arrested for assault 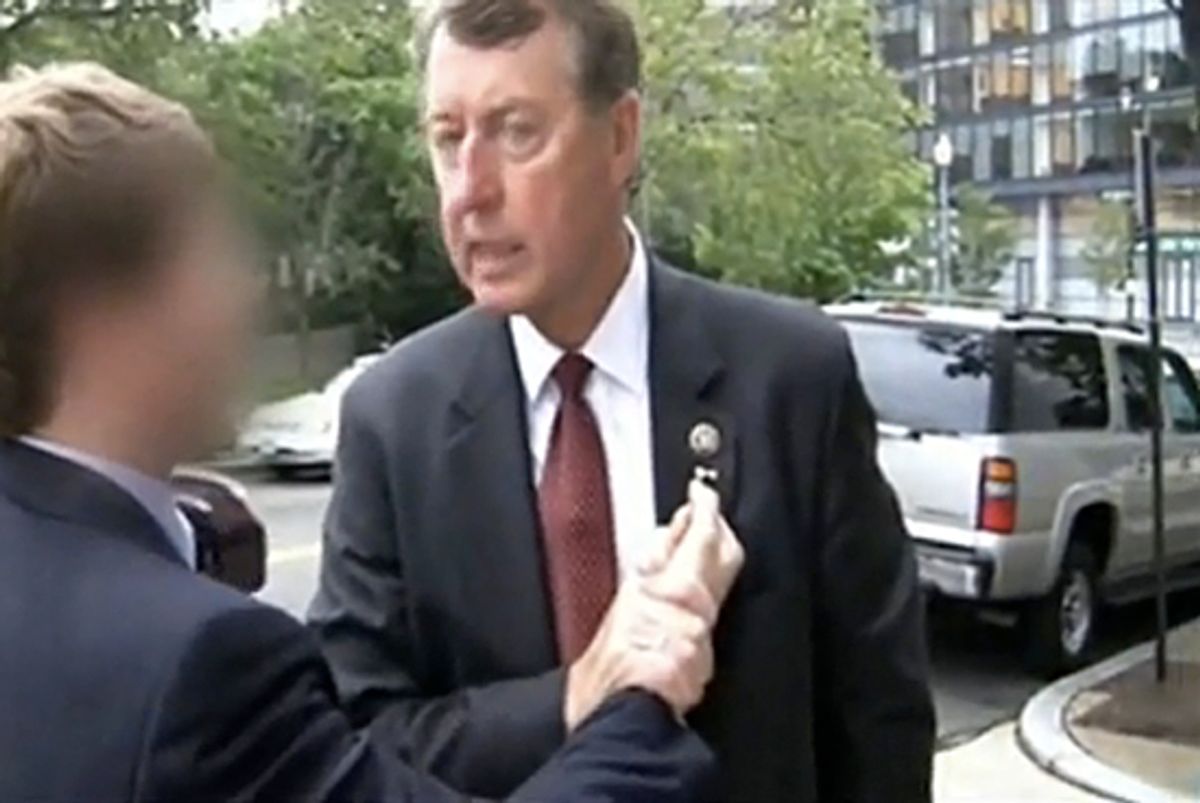 Rep. Bob Etheridge (D-NC) was walking on a public sidewalk last week when he was politely asked a question by someone holding a camera, and this is what happened:

That's a clear case of assault and battery (the unedited video from the first camera is here).  There is some speculation that the individuals questioning him have some connection to the right-wing organization of Andrew Breitbart.  I hope it goes without saying how irrelevant that is.   The only reason I think this is worth noting is this:  imagine what would have happened to those students if this situation had been reversed, and it was they who had physically assaulted Rep. Etheridge, rather than the other way around. How quickly would they have been arrested and prosecuted?  The application of our laws isn't supposed to depend upon who is perpetrating the crime and who the victim is.  Obviously, there are few principles, if there are any, more discarded than that one in Washington, but it would be nice to see its being applied in this instance by having this Congressman, obviously inebriated with an extreme sense of entitlement, arrested and charged.

UPDATE:  In response to the emergence of this video, Etheridge's office has released this statement:

I have seen the video posted on several blogs. I deeply and profoundly regret my reaction and I apologize to all involved. Throughout my many years of service to the people of North Carolina, I have always tried to treat people from all viewpoints with respect. No matter how intrusive and partisan our politics can become, this does not justify a poor response. I have and I will always work to promote a civil public discourse.

That's nice.  Of course, most people who commit crimes express regret once they get caught (especially on video) and it becomes a scandal, so it doesn't affect the point that he ought to be treated exactly the same way as these individuals would have been had they physically assault him.

UPDATE II:  Given that this was a Democratic Congressman assaulting citizens who are perceived to be right-wing, I obviously knew that some people would rush to justify what he did; that's part of the reason I posted this.  But even I'm surprised by the extent of the eagerness to defend a clearly illegal and indefensible assault based on the political ideologies of those involved (just check the comment section for how extreme that mentality is, and I've seen it elsewhere).  Some are honest enough to admit that because the victims here were right-wing advocates, they should be presumed to have provoked this and got what they deserved (who knew that the law of assault depends upon the political affiliation of aggressor and victim?), while others -- amazingly -- continue to fantasize about all sorts of events that they claim probably happened off camera to mitigate or justify the Congressman's actions, even though:  (a) I linked to the unedited video above which shows that no such thing happened and (b) Rep. Etheridge has now issued a statement and not even he claims there were any such mitigating or justifying events that were concealed as a result of dishonest video editing.  But still, the claim persists.

Some people obviously cannot accept that a Good Democrat could possibly do something bad to a conservative, and they'll continue to deny reality -- or just invent realities that don't exist -- to justify that.  This is not a hard case.  As Pam Spaulding said:  "Sad that personal responsibility for being a violent hothead now comes with mitigation talking points. Dems need to quit it."  Tribalism is a natural part of the human perspective, but it's amazing when even incidents as relatively trivial and clear-cut as this one are processed through its distorting lens.  Do you think any Democrats defending Etheridge -- or most conservatives criticizing him -- would be doing so if he were a right-wing GOP Congressman from North Carolina who assaulted nice liberal students questioning him on a public sidewalk about his conservative views?

UPDATE III:  Digby ties together this incident with several similar ones, and explains what should need no explanation:

This idea that politicians, regardless of party affiliation, are allowed to assault citizens who ask them questions is beyond the pale, no matter who the questioner is.  It's a tough gig, I know, but they chose it and they have to be answerable to the people.  Even if one of them is an Andrew Breitbart stooge (which this kid probably wasn't, btw.)

I wonder how many people responded consistently to all of the other incidents she recalls, rather than formulating one's position so as to defend the side with which one sympathizes politically.