Despite endless whining from the lobbyists, the Arkansas senator's derivatives reform proposal keeps moving along 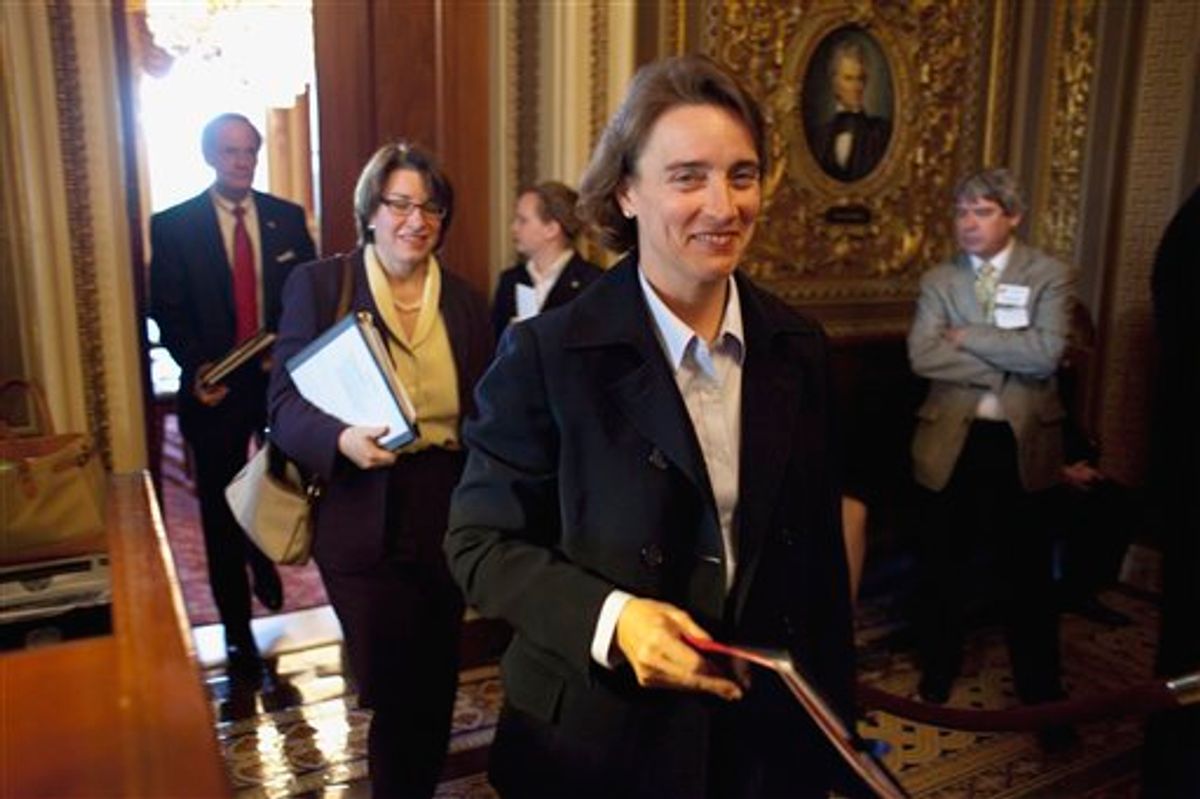 FILE - In this May 19, 2010 file photo, Sen. Blanche Lincoln, D-Ark. walks on Capitol Hill in Washington. Lawmakers will tackle sticking points and try to blend House and Senate bills into a single rewrite of banking regulations. A final measure, which President Barack Obama wants by July 4, is intended to prevent another financial crisis like the 2008 meltdown, which triggered a deep recession. (AP Photo/Harry Hamburg) (AP)
--

So what's happening with Blanche Lincoln's infamous derivatives regulatory proposal, popularly referred to among the cognoscenti as "Section 716," adored by progressives (who never liked Lincoln), despised by Wall Street (who thought they could trust Lincoln to serve their interests), and supposedly opposed by the Treasury?

As originally described, Section 716 was supposed to force banks to "spin off" their derivatives trading operations. As the conferencing process reconciling the varying House and Senate versions of regulatory reform rumbles forward, the proposal is going through a process of "clarification." Depending on who you trust, that means the proposal is either being weakened or made more sensible.

The key aspects of the clarification are that instead of spinning their derivatives operations off entirely, banks will be allowed to move them into subsidiary operations that are required to reserve significantly larger amounts of capital against potential trading losses than before. Community banks -- defined as holding under $50 billion worth of assets -- will be exempted from the requirement. And everyone will get two years of breathing room to implement the provisions.

FireDogLake's David Dayen, a redoubtable blogging warrior for the left, concludes that the proposal is being gutted. But the Financial Times, citing Paul Volcker's "softening of opposition to the provision," reports that "banks are likely to lose a key lobbying battle." Barbara Kiviat, writing at Time's Curious Capitalist blog, argues that "whether or not banks wind up having to spin off their derivatives units ... Blanche Lincoln has already come out ahead ... because lobbyists ...  have expended an incredible amount of time and energy trying to get rid of Lincoln's provision," which has distracted them from warding off other threats.

But perhaps the best ratification of the process, even if the proposal's sharper edges are getting rounded off, is how distinctly unhappy the lobbyists and bankers sound.

James Mahoney, director of public policy for Bank of America Corp., said: "We are concerned that we won't be able to provide our customers with financial products they need to manage risk and grow and that foreign banks will step in and take that business."

"The restrictions under the new proposal are not much different than complete divestment," said Scott Talbott, senior vice president of government affairs for the Financial Services Roundtable, a Washington-based trade group.

We won't know the final details until later next week. Meanwhile, neither the progressives nor Wall Street seems happy: standard operating procedure, for the Obama era.