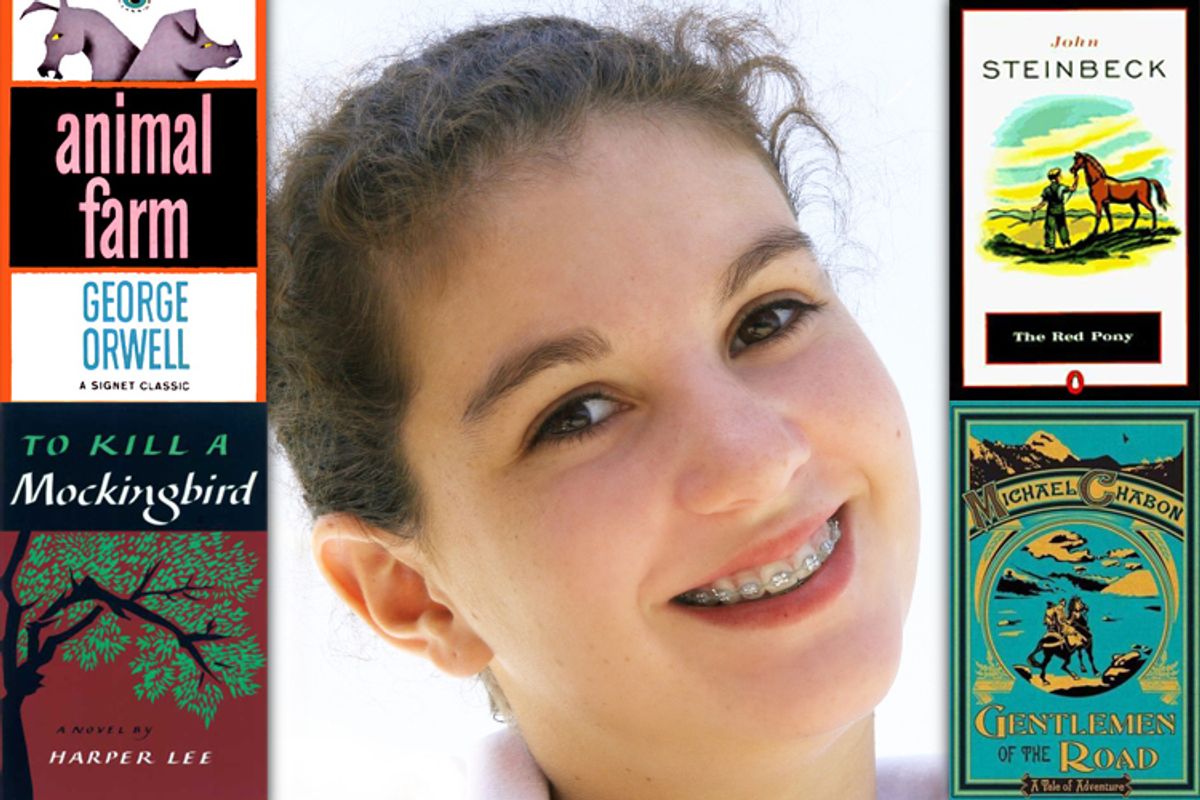 The idea makes sense: If you want to raise a kid with broad horizons and good writing skills, encourage said kid to read books that offer diverse perspectives, explore deeper themes, and resonate with excellent prose. This might mean sometimes encouraging your kid to read books intended for adults. And suddenly the idea sounds scary.

As a writing teacher, I ran into the same problem time and time again: I'd find the "perfect" book to assign to my students (ages 10-12): a short novel with accessible yet brilliant writing and apparently appropriate themes, only to discover a steamy sex scene halfway through my preview reading.

Many kids are ready and willing to read books intended for adults, but selecting books with both kid-friendly style and content can be time consuming. Here are the results I've compiled through a process of trial and error. I decided not to include authors who are generally accepted as appropriate for young readers (J. R. R. Tolkien, Sir Arthur Conant Doyle, Jules Verne).

Not Orwell's best (see "Down and Out in Paris and London"), but moving and clearly written. Plus, talking animals offer a sneaky way to spark discussions on morality and government. When I was teaching, I assigned "Animal Farm" to fourth and fifth graders and the entire class made it to the end without complaint.

When a small craft is hijacked and goes down in the Himalayas, four travelers stumble upon paradise on earth. Written and set in the 1930s, "Lost Horizon" belongs more in the realm of adventure fiction in than the hallowed halls of serious literature. That said, it's not without deeper meaning, and the writing is great: spare, witty, and very much a product of the era. Popular usage of the term Shangri-La stems from this novel, which was widely read at the time it was published. Some racial terms common to the era (such as Oriental) may require a context-based explanation.

"The Red Pony" by John Steinbeck

Kid protagonist? Check. Animals? Check. Clear writing? Check. Kid appropriate themes? Check. Steinbeck's bittersweet novel about a pony and his boy is an easy-to-read introduction to serious literature. To be honest, my 10-year-old students didn't love this book, but it did elicit some thoughtful responses.

"The Flame Trees of Thika" by Elspeth Huxley

This memoir of growing up in Kenya comes alive with the steady voice of a curious and isolated only child. Huxley's prose sings with the wild lands, the wild animals, and the wild, sometimes ruthless characters who fight for survival during the last days of British Colonial rule. Not a difficult read, but some themes may be disturbing to younger readers -- Huxley writes frankly about hunting and race relations and mentions (not explicitly) an extramarital affair.

"To Kill a Mockingbird" by Harper Lee

Pretty much a given. Lee's book is already assigned at the early high school level, but I'm including it because the story can't be beat for its combination of serious writing, a likeable child protagonist, humor, and (predominantly) kid-accessible subject matter. Speaking of subject matter... the references to rape can, of course, be disturbing. My 11-year-old students liked this book, but I cleared it with parents first.

"Gentlemen of the Road" by Michael Chabon

A pulpy yet beautifully written adventure story about two itinerant swindlers. Swashbuckling action is delivered via gorgeously constructed sentences, making this book a good choice for the more reluctant reader. Violence (cartoonish) and references to rape and sex (not explicit) limit the age range to older kids.

"Till We Have Faces: A Myth Retold" by C.S. Lewis

A retelling of the story of Cupid and Psyche, "Till We Have Faces" is written in musical prose, and despite the mythical setting, characters emerge as startlingly real and human, and morality is depicted in shades of grey. Lewis explores trust, jealousy, the meaning of love, and the significance of beauty. Not difficult to read, but perhaps a bit dark and dense for some younger readers.

"The Mysterious Stranger" by Mark Twain

Length (short) and humor (wicked) fall in favor of this novella about the devil visiting a small town in sixteenth century Austria. Because of the sometimes convoluted sentence structure, I read this one aloud to my 10-year-old students, who loved Twain's mischievous and evocative depictions of magic. Not necessarily appropriate for children with strong Christian beliefs.

British school kids develop an elaborate network of spies, but their game turns dangerous when they inadvertently allow an adult to join their ranks. Rendell's prose is crisp and brilliant, as usual. I read (and loved) this thriller when I was 12, and it certainly didn't scar me for life. That said, it does contain some scary scenes.

"Bless Me, Ultima" by Rudolfo Anaya

An evocative coming-of-age story about growing up in New Mexico in the 1940s. The seven-year-old protagonist’s friendship with an elderly curandera (healer) leads him to question his religion and the values of his parents and neighbors. Contains references to sex (not explicit) and some profanity. Not necessarily appropriate for children with strong Christian beliefs.