The secret life of pimple poppers

It's a social taboo -- but why is it all that different from blowing your nose? Salon investigates 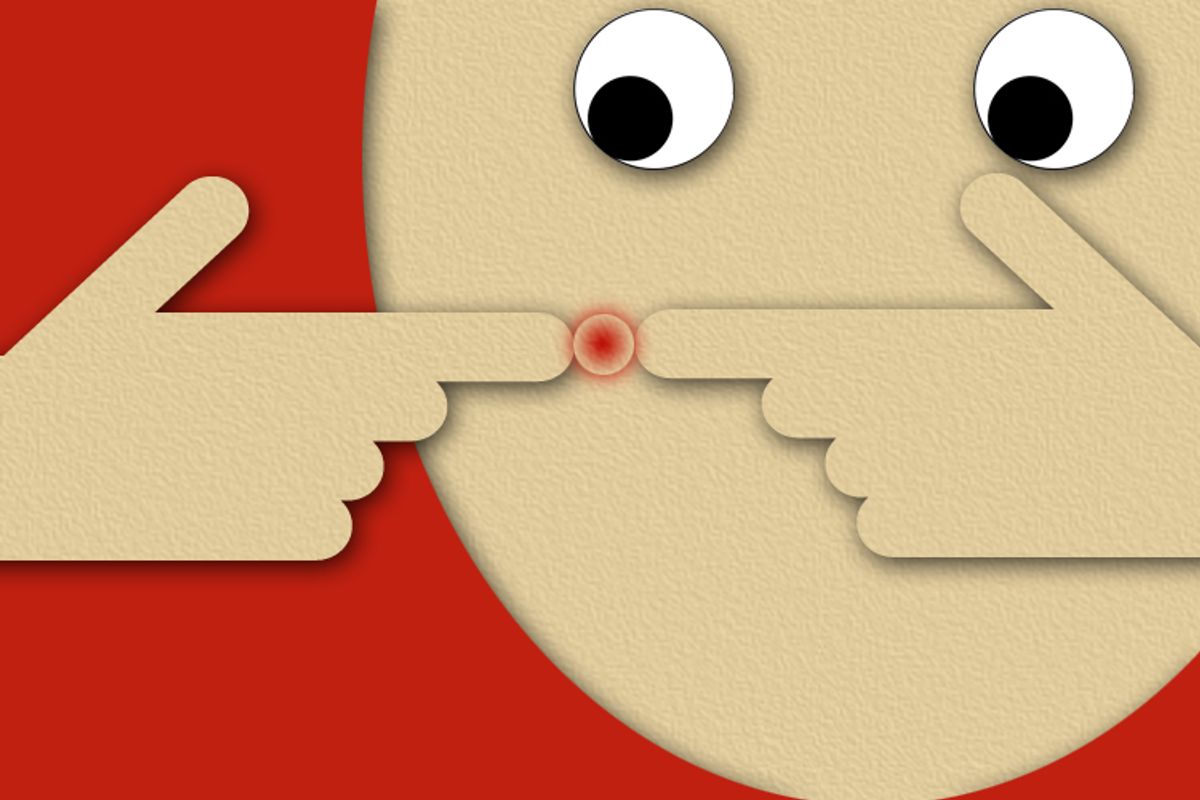 I have a friend with whom I often discuss things I don't discuss with anyone else. Bowel movements, infections, bodily fungi -- it's all fair game with him. But just the other day, I mentioned that I'd popped a large pimple on my back. A back-juicer, I called it. "Dude," my friend said to me, "that's gross."

On one hand, I understood. On the other, who hasn't popped a pimple? Who doesn't get a painful little prick of satisfaction from doing so? I didn't see why my revelation deserved such a disgusted reaction. In our current gross-out moment, when Lady Gaga's labia can become water cooler fodder, when Tiger Woods' golden shower-related texts are read by millions, and when there are popular websites -- and best-selling books -- devoted to excrement, pimples reside firmly in the socially radioactive TMI zone. Discuss at your own peril.

Outside the fetish cornucopia that is the Internet, though, pimple popping hides in plain sight. We see the effort put into pimple popping all the time: The dude in the next cubicle with the scabby blemish on his face; the sunbathers at the beach with acne scars dappling their shoulders. Yet we never bring up the subject the way we do with other similarly icky biological matters. Why is it socially acceptable, if indelicate, for someone to sit beside you on the bus and blow thick streams of snot into a thin tissue but verboten to pop a pimple in public?

"Trying to determine why we have such a negative view of pimple popping is almost an existential question," says Mark Bowers, a pediatric psychologist based in Ann Arbor, Mich., who has written about acne-related pathologies. "I think it has to do with societal norms, and who's to say why those are what they are? Why is it OK if I raise my ring finger at you, but not my middle finger? Similarly, blowing one's nose in public is acceptable, but there's no place for pimple popping. I don't know that there's a 'good' explanation for why that is."

The virtuous killjoys on the Mayflower could surely hazard a guess: Pimple popping arouses our puritan streak. We've all heard the old wives' tales about where pimples come from: eating too much candy, touching one's face with greasy hands, not washing enough -- all the habits of an individual with a weak, decadent will.

If acne-sufferers are bad, poppers are even worse. They can't keep their hands off themselves long enough to heal. Instead, they feverishly work at a sensitive part of their bodies, usually when no one's around, increasing the tension until it's resolved in explosive fashion. (Remind you of anything? In his 2007 novel "The Flawless Skin of Ugly People," author Doug Crandell created a protagonist who could not leave his pimples alone, a sign of his own self-destructive impulses.)

There's also a contradictory element of self-improvement and unintended defacement to pimple-squelching. We scan our faces in the mirror looking for blemishes, and then try to fix the ones we find -- only to create scabs and swelling. The pursuit of satisfaction is at the root of both motivations.

"I feel like I'm doing my body a justice when I do it," says Liam Buckley, an 18-year-old from Edinburgh, Scotland, and longtime acne sufferer. "I enjoy it -- not in a disgusting way, mind you. In my experience my acne heals faster when I do it. Popping is fun because it makes you feel like you are beating the acne. I'm almost 100 percent clear now."

"Pimple popping offers instant gratification," seconds Laura Cooksey, who "pops pimples all day long" as an aesthetician at the Face Reality acne clinic in San Leandro, Calif. "People find it pleasurable the way that having your legs waxed is pleasurable. It can be uncomfortable and sort of nasty -- we've all been grossed out when the pus hits the mirror -- but you're doing something that can help you toward your goal of clearer skin."

For Cooksey, prowess at pimple popping, which in the dainty parlance of her trade is called "extraction," is also a matter of professional pride. "Any aesthetician worth his or her salt likes to do it." Certainly there are some parents, amateur aestheticians of the world that they are, who understand.

Despite what you may have heard, pimple popping isn't necessarily bad for you. "It can definitely be helpful, you just have to know the right way to do it," says Dr. James Fulton, a fellow at the American Academy of Dermatology. "The problem is that people get neurotic about it and pick and pop before the pimples are ready. You have to have the patience to wait until you can see the whites of the pimple's eyes. If everyone followed that advice, we would see less acne scarring. But not enough people have been properly educated."

To help spread the gospel, Daniel Krebs of Acne.org, which draws 1.2 million unique visitors a month, has posted a "how to" guide. "Look," he says, "if people have a big pimple staring at them in the mirror, they're going to pop it. That's the reality of the situation. So I think it's only right that they have the opportunity to learn the most gentle and effective way of doing it. If you happen to enjoy it, more power to you."

There's nothing to be ashamed of. Surely, even the most easily queasy among us can admit that as an activity, pimple popping (when not done neurotically) is not that different from, say, cleaning one's ears.

"Pimple popping is only troublesome if it becomes pathological," says Bowers. "That is, if it's disrupting your day-to-day functioning. Otherwise, it's not something that has to be understood as problematic or off-putting."

"And anyway," he continues, "there's way grosser stuff out there."