Despite Pixar's drift into middle-aged angst, Woody and Buzz's latest adventure has thrills and charm aplenty 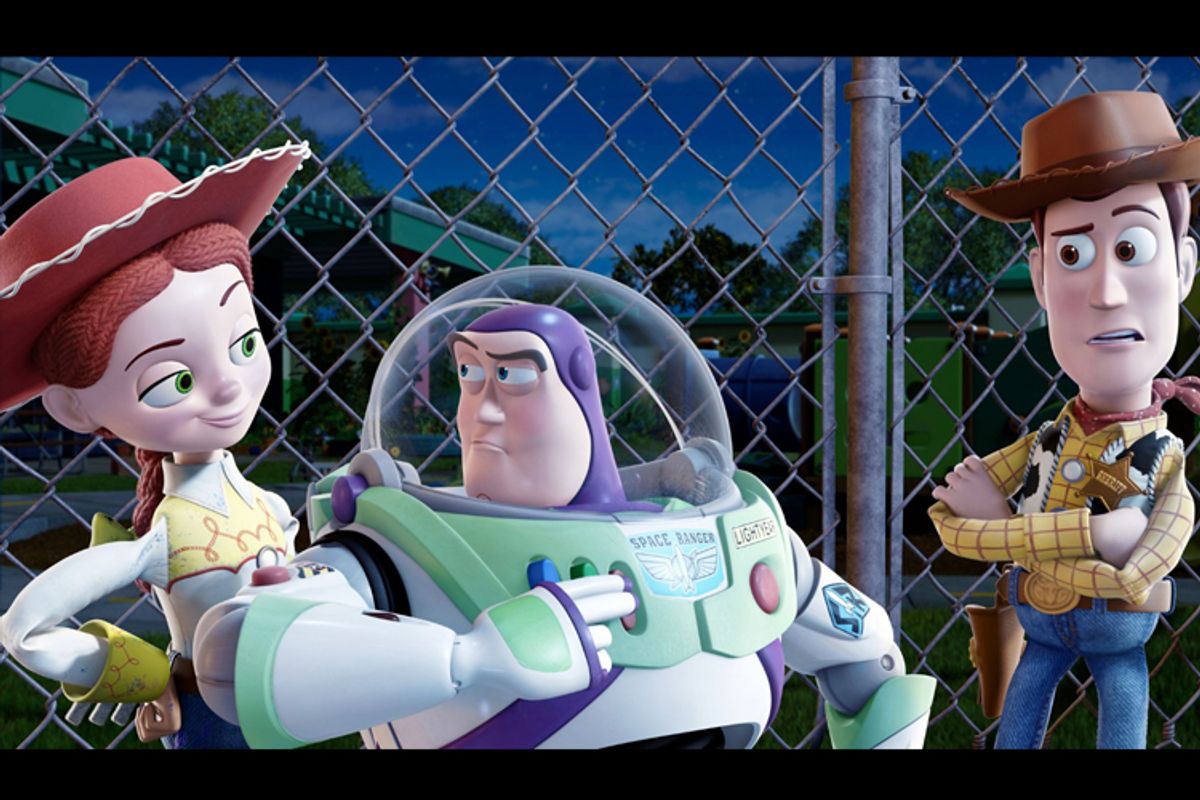 That whooshing sound you hear is the collective exhalation of breath all over Los Angeles County -- and especially in the Walt Disney corporate offices -- as the film industry's suits realize that finally, like a bunch of monkeys accidentally typing the Magna Carta, they've backed a winner. "Toy Story 3," from the ever-reliable purveyors of digital charm at Pixar, is a bona fide summer delight loaded with action, humor, nostalgia, a veritable blizzard of pop-culture references and general good vibes. Add in the extra revenue from widespread 3-D projection, and the dismal Hollywood summer of 2010 has finally found its zillion-dollar windfall.

Should I be reviewing "Toy Story 3" as a business trend, instead of a movie? Well, of course not, but it's tough to resist when the two are virtually inseparable. I enjoyed this latest and perhaps last episodic odyssey of Woody, Buzz Lightyear and friends tremendously -- let's face it, the voice cast is getting pretty long in the tooth -- especially because preview screenings for family-oriented movies like this are about the only occasions when critics and media pros bring their kids, and the experience is very different. (My 6-year-old twins are curious but cautious about "TS3"; they wanted me to check it out first.) Some early and mildly intense action scenes scared the bejesus out of a quite little girl behind me, aged 3 or 4, which is as close as I'm going to get to a parental advisory.

"Toy Story 3" will play tremendously well to a big, mixed crowd, and will keep on doing so deep into the summer, no doubt. It's a beautifully animated film loaded with rich and atmospheric detail (to which, in my judgment, 3-D projection adds almost nothing). It's got just enough readily accessible gags and emotions for the younger set and a high enough "aww" factor for the most movie-averse grandparents. But of course its real audience is twofold: young adults who look back fondly on the first two "Toy Story" films, and somewhat older parents who may be watching this yarn of childhood's end through a double glaze of nostalgia and life experience. (Given that the first "Toy Story" came out 15 years ago, it's definitely possible to belong to category A and category B simultaneously.)

Much of the charm of Pixar's productions, to be sure, comes from this mode of cheerful, collective calculation. You never get much sense of individual authorship in Pixar's movies -- this one's directed by Lee Unkrich, co-director of three earlier Pixar titles, from a script he wrote with Michael Arndt, John Lasseter and Andrew Stanton -- but there is a central, impish sensibility behind the studio's storytelling. Pixar pictures are all about splitting the difference: Movies for kids loaded with jokes for adults, or vice versa; traditional storybook archetypes mixed with conventional social satire; "family values" yarns infused with a faintly left-liberal communitarianism. Perhaps consciously, it's a next-generation update of the way the Disney studio made movies during Walt's lifetime.

Certainly there's more than enough mix-and-match jammed into "Toy Story 3." It begins as a pell-mell action movie (causing that little girl behind me to announce, loudly, that she wanted to go home), out of D.W. Griffith by way of a "Superman" serial, then quickly becomes a bittersweet family yarn about the putting aside of childhood things. (Can it be argued that the entire "Toy Story" series is a meditation on themes of loss and mortality? I'm pretty sure it can.) That's all before it becomes a prison movie, or rather a prison movie mixed with one of those sci-fi stories about a future utopia with a dark secret.

It even -- or so some critics more imaginative than I have suggested -- channels bits of minimalist French director Robert Bresson's "A Man Escaped." And maybe Auschwitz movies. Just to scramble away from that interpretation as quickly as possible, I haven't yet mentioned the hi-frickin'-larious Ken-and-Barbie disco number, which is completely irrelevant to the story but might be the best thing in the movie. Or the stretch when Buzz Lightyear is transformed into a flamenco dancer, a faintly xenophobic one-note gag extended to sadistic length.

I guess it's a good thing that "The Brave Little Toaster" was also a Disney film (and one made more than 20 years ago), because for anybody who happens to have dragged that VHS tape out of storage recently, the plot of "Toy Story 3" might seem a tad familiar. Now, I know -- the story of toys (or appliances, or whatever) who come alive and must embark on a dangerous and harrowing homeward quest is not exactly copyrightable. Just off the top of my head, you could also cite Margery Williams' "The Velveteen Rabbit," Russell Hoban's "The Mouse and His Child" and Kate DiCamillo's "The Miraculous Journey of Edward Tulane" among the children's literature faintly echoed in "Toy Story 3." But I'll just invite you to consider the scope and extent of "Toaster" influence herein and then come back and talk about it.

So Andy (still voiced by John Morris, who in real life is 25), affectionate owner of Cowboy Woody (Tom Hanks), space ranger Buzz Lightyear (Tim Allen) and their entire cohort of pals, is heading off to college. The toys haven't been played with in years, and are more or less prepared for an "orderly transition" to life in the attic. There's already a racetrack up there, as Woody hopefully points out: "And those guys from the Christmas decorations! They're kind of fun, right?" One day, after all, Andy might have kids of his own, and then ... This is one of several scenes in "Toy Story 3" where kids may feel slightly bored or baffled while the parents in the audience sniffle quietly.

Calamity strikes, of course, and all of Andy's toys except Woody -- the ensemble includes Cowgirl Jessie (Joan Cusack), Mr. and Mrs. Potato Head (Don Rickles and Estelle Harris), Rex the dinosaur (Wallace Shawn) and Hamm the piggy bank (Pixar in-joke John Ratzenberger) -- are erroneously donated to a day-care center. At first it seems like an earthly paradise for orphaned toys, whose population is ruled by a benevolent purple bear called Lotso (this is Ned Beatty, delivering the movie's standout performance) and his lieutenant Ken (Michael Keaton), who boasts an eye-popping collection of '70s and '80s leisure wear.

But oh no, indeed not. Lotso and Ken are not as genial as they appear, and they promptly imprison Buzz, Jessie, the Potatoes, et al., in the dreaded "Caterpillar Room," there to be assaulted, munched, painted and dismembered all day by the most fearsome creatures of all: toddlers. But the fellowship of toys, thus divided in Tolkienesque fashion, must be reunited: Woody must somehow break into the day-care center -- and no sane toy would willingly enter that place of suffering -- and then contrive to get all his buddies out, past Lotso's borderline-sinister minions, and back home to Andy's before it's too late.

It's a rich and heartfelt adventure yarn, if perhaps a little too scary for the youngest children, that brings these abandoned toys to the brink of a final and terrifying doom, and then finds a wonderful resolution to what seems an impossible dilemma. Andy really is too old for Buzz and Woody, after all; how can a distracted 18-year-old possibly reward their loyalty? Pixar's animated humans are still no match for their animated objects, but Morris does a lovely job of finding an essential sweetness in Andy. He is still able, amid a wider world of electronic gizmos and school and girlfriends, to reconnect with his younger self just long enough. I can remember that acute teenage sensation: You're excited about leaping forward into adult life, but you don't always want to let go of childhood altogether. (OK, let's be honest: The feeling persists for decades, and perhaps indefinitely.)

There's a certain middle-aged wistfulness in the last several Pixar films that verges on postmodern decadence. Only "Cars" and "Ratatouille," among the studio's recent output, actually seem like movies primarily made for young viewers. (My kids found "Up" alternately tedious and frightening, and I can't imagine too many kids under 12 enjoying anything about "Wall-E.") "Toy Story 3" is no exception, despite its heritage; it's about the pain of leaving childhood behind, like the agonizing last chapter of A.A. Milne's Pooh books.

What's a little more troubling, at least to me, is the way that Pixar movies honor the very things they themselves are replacing. It's a little like the way shopping malls are often named after geographical features now buried under the parking lot: Cottonwood Creek Centre, or Sawgrass Mills. "Cars" might be the epitome of this Pixar tendency, a story about an old-fashioned small town inhabited by automobiles -- that was doomed by the rise of the automobile. In the same way, the "Toy Story" films depict children who play imaginatively with old-fashioned, low-tech toys like Buzz and Woody all day, instead of zoning out in front of "Toy Story" films. I'm not sure whether to call that hypocrisy or self-criticism or appealing fantasy; I can only wish it resembled real life.