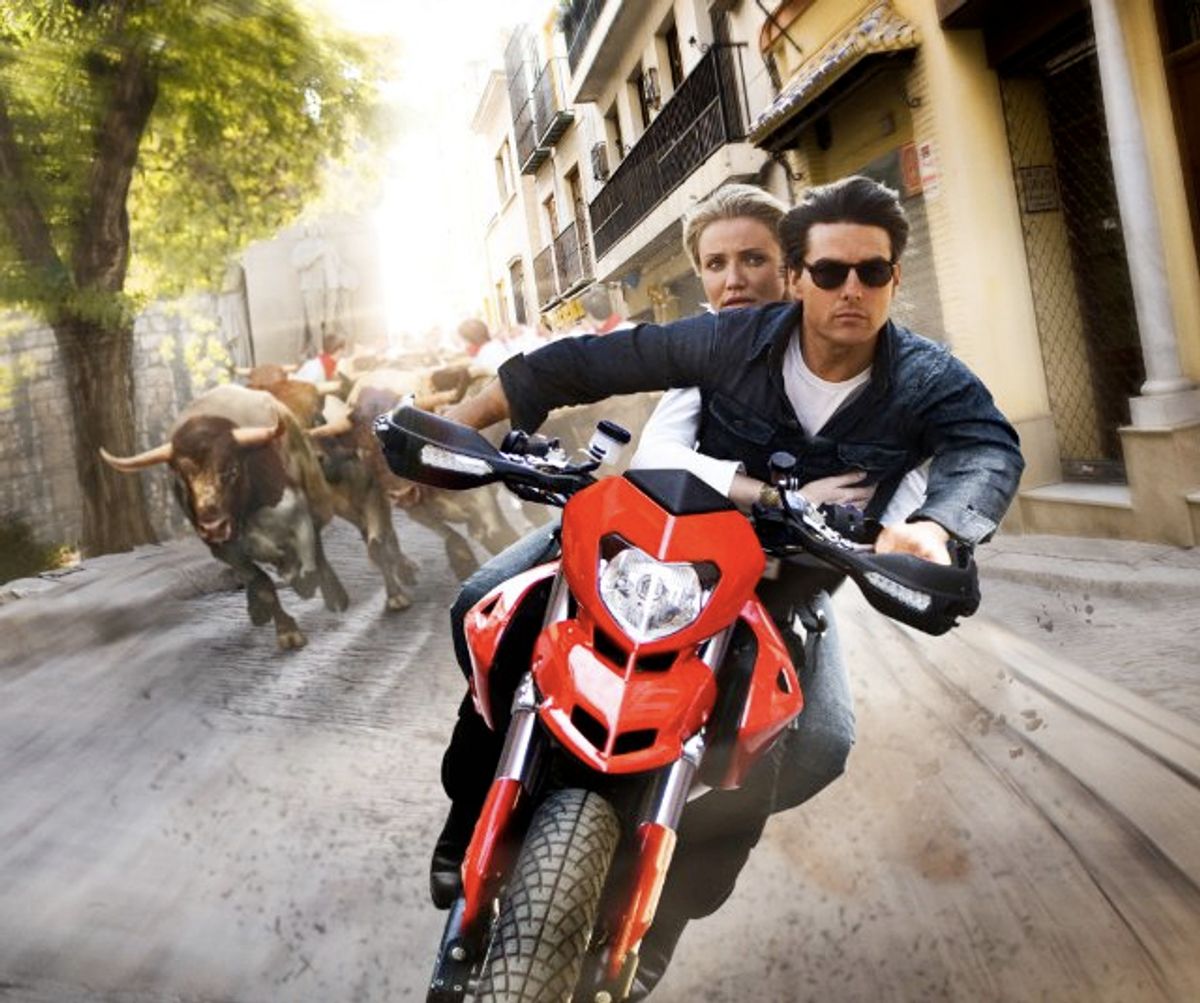 June, the klutzy-cute heroine of "Knight and Day" played by Cameron Diaz, knows right away that renegade CIA agent and/or psychopath Roy Miller is the guy for her. It becomes even more obvious after Roy hijacks a plane, kills everyone on it except June, slips her a date-rape drug and breaks into her Boston apartment to put her to bed. Then, to close the deal, he shoots her charming, lunkhead-ish firefighter ex-boyfriend. OK, just in the leg. Before fleeing the scene of that particular crime, Roy exchanges a dudely handshake with the downed fireman, assuring him he hasn't fractured his thigh or severed his femoral artery. "It could be the best thing that ever happened to him," Roy purrs to June. "He'll be a hero."

That's among the funnier and more effective moments in this deranged and uneven action-comedy-romance, but it speaks to what makes the movie work, when it does work, and also to what makes it nuts, which it mostly is. Roy is of course played by Tom Cruise, and "Knight and Day" is both a comeback vehicle for that half-tarnished superstar and a movie that adopts his damaged public persona as its theme and subject. We already know that women not-so-secretly love the bad boys, but this movie informs us that they're also hot for the batshit-crazy boys, especially when they come with Tom Cruise's shock of hair, Tom Cruise's alarmingly hairless Ken-doll chest and Tom Cruise's billion-dollar smile. Or maybe all those things have to come attached to Tom Cruise's demented, cult-leader overconfidence and sense of purpose.

During the course of June's herky-jerky odyssey with Roy -- which begins in the Wichita airport, right before he commandeers that flight to Boston, shoots the passengers and crew and crash-lands in a cornfield -- June is drugged and abducted not once but several times. She wakes up on a South Sea island, on a train through the Austrian Alps and in her own bed, never knowing how she got any to those places. (Roy has left helpful little word-balloon Post-Its all over her apartment, along with breakfast.)

Oh, and along the way Roy keeps dressing and undressing June, and generally behaving a bit too much like a lonely fetishist with an inflatable doll. When she inquires exactly how Roy get her out of her clothes and into a fetching cornflower-yellow bikini for their brief sojourn on that South Pacific island -- "No one's ever found me here," he says, right before the fighter planes appear -- he insists it was chaste. He is a secret agent trained to assemble and disassemble firearms in total darkness, after all. Many of the jokes in this rousing but nonsensical film are at least medium-funny, but that one edges a little too close to what you tell the cops after you get arrested with a Kardashian in the basement.

All of this, along with the movie's death-defying stunts (some performed by Cruise himself) and its howlingly implausible yarn involving federal agents gone rogue, various European gangsters and a perpetual-motion machine, is presented as good wholesome fun, just a little song-and-dance to entertain us in a generally meaningless summer movie. Which is pretty much the justification for the overly intense, refugee-from-the-meth-lab screen persona Cruise has been projecting for more than two decades, here cranked up even beyond his normal parameters.

Cruise has always played characters who believe in themselves passionately, even if their faith seems misplaced or bizarre. Early in his career he projected a brash, all-American machismo that moviegoers sucked up repeatedly in "Top Gun," "The Color of Money," "Cocktail" and other '80s hits. But that certainty and drive can also be played for inspiration, as in "Born on the Fourth of July," for supposed dramatic complexity, as in "Minority Report" and "Jerry Maguire," and even for comedy, as with Cruise's ponytailed man-healer in "Magnolia" and with Les Grossman, the super-agent from "Tropic Thunder" who's about to become his own franchise.

It scarcely needs mentioning that Cruise's off-screen persona appears to present exactly the same manic or demonic self-belief, at least for public consumption, and that in this century Cruise the movie actor has increasingly been held hostage by Cruise the perceived weirdo. Aided by phalanges of managers, publicists, producers and directors, Cruise has pursued various strategies to try to recapture the bulletproof stardom that crested 10 years ago with "Mission: Impossible II" and began to trend sharply downhill after his divorce from Nicole Kidman.

Ignoring his image problems and mounting stodgy, expensive dramas clearly hasn't been working (I hadn't even remembered that Cruise was in "Valkyrie" two years ago until I looked it up), so now we get director James Mangold's "Knight and Day," a mashup of Bond-style action and screwball comedy with a tangled production and marketing history -- previous titles have included "Wichita" and "Trouble Man," both better than this one -- that reportedly cost $120 million and is causing Fox executives many Maalox moments. This seems like a conscious effort to turn Cruise's troubled image to his advantage, which is both a clever idea and a moderately creepy one.

You could also use those adjectives to describe Roy Miller, who goes from eerie, wisecracking calm to trigger-twitch near-psychosis as easily as he leaps from one Salzburg rooftop to the next. He bears a strong resemblance to that super-excited guy we saw jumping up and down on Oprah Winfrey's couch. Roy is like a meta-Cruise or a Cruise pastiche; even the disturbing, stalkerish aspects of his character seem as if they were constructed from tabloid stories about the actor's marriage, his religious affiliation, his sexual identity.

Cruise retains an unusual charisma and a natural feeling for the camera; at age 48 (as of next week) he's as handsome as ever, with a touch more character around the eyes and mouth. When pointed in the right direction, he's a highly effective instrument, but he long ago became so powerful that he sets his own terms (rarely a good idea for actors). His persona has always had a knife-edge quality; to millions of fans he was brash and irresistible, but to others he was always a robo-dumbass. This is a shrewd and lively performance, fueled by some degree of calculated self-mockery, but I'm not sure it's enough to change public perception in any widespread fashion.

Mangold, also the director of "3:10 to Yuma" and "Walk the Line," handles the ludicrous extremes of Patrick O'Neill's screenplay with style, delivering what's essentially an absurd farce as if it were a semi-serious globetrotting thriller along the lines of Matt Damon's "Bourne" series. I don't expect "Knight and Day" to prosper enormously or return Cruise to the apex of Hollywood's pyramid, but it's a nifty popcorn flick with hellacious stunts and quite a few laughs -- as long as you're not bothered by the enormous body count and the thoroughly gruesome portrait of men, women and the crazy thing that happens between them.

As for Cameron Diaz, who is apparently mounting a comeback effort of her own -- not counting the "Shrek" films, her only hit since appearing with Cruise in "Vanilla Sky" in 2001 has been "What Happens in Vegas" -- she spends most of the movie either shrieking or sleeping, and is appealing enough in both instances. June is supposed to be the audience's portal into Roy's nutso spy-vs.-spy world, a regular gal sucked into an incredible situation, and so on. It kind of works, or almost does, but there's a punch line: What do single women pushing 40 yearn for? A man, of course! A real man, a manly man, one who pays attention to them and takes them places. Preferably under general anesthetic.