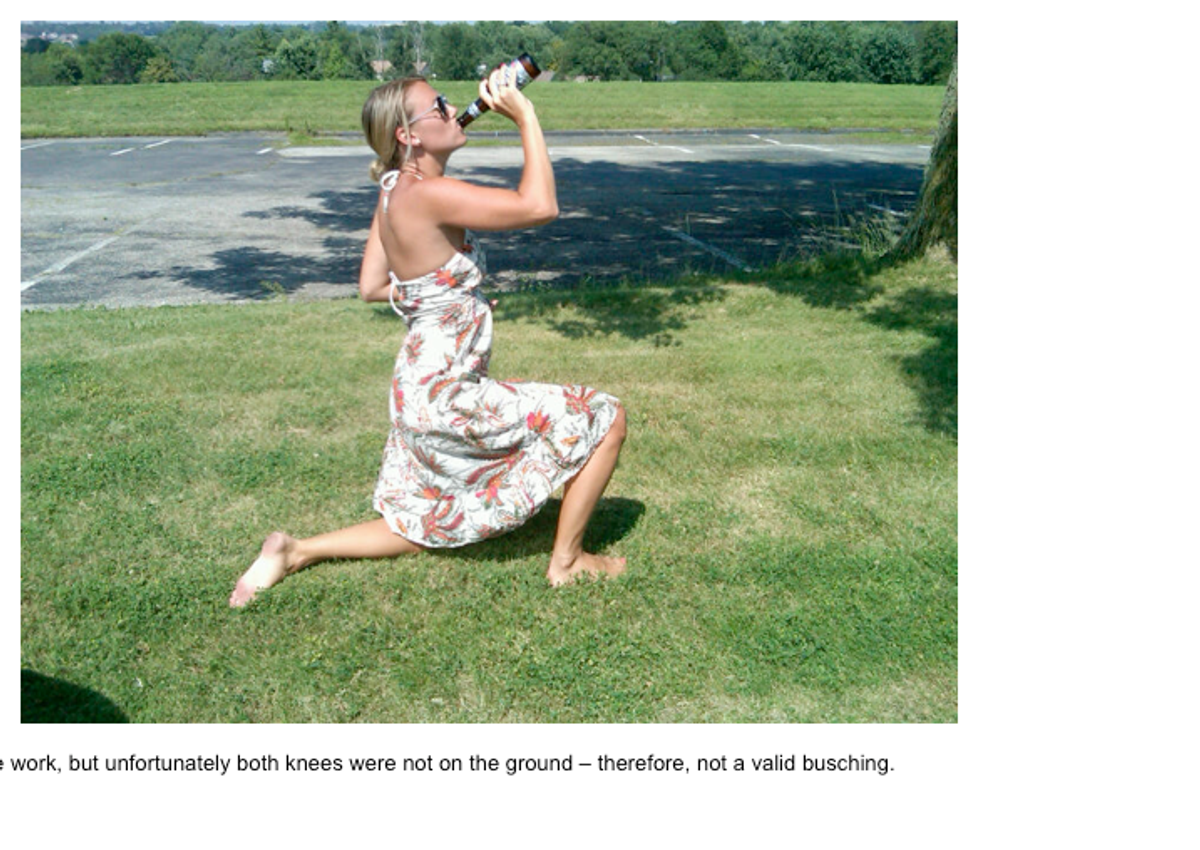 Last week, the fraternity drinking game of Bros Icing Bros was dealt a major blow. The lawyers over at Smirnoff's parent company, Diageo, shut down the website that started the phenomenon to prevent mis-marketing of Smirnoff Ice. This move headed off the rumors that the site was simply a viral advertising ploy -- it didn't, after all, put the product in the best light, even if it did move a lot of cases of Acai Berry-flavored malt beverage. But don't fret, bros: Icing lives on, in your hearts and your dingy Omega houses (and, of course, that YouTube clip where some bro iced Coolio). And now, there's a female response to the game: Girls Busching Girls.

The rules are the same as bros icing bros, but with the Smirnoff replaced with -- you guessed it -- a Busch, and the "Busched" party is required to take two knees instead of one (the woman pictured above displays poor form). The site explains that "there is nothing more insulting than being forced to take two knees and publicly slam down a Busch."

Here at Broadsheet, Riddhi Shah previously pointed out that the "icing" phenomenon has some not-so-endearing sexist undertones. Girls Busching Girls aims to flip the misogynist-leaning dialogue of the game to exclude bros and enforce "the girl code."

But Girls Busching Girls hasn't taken off the way that Bros Icing Bros did, and I'm not that surprised -- for all the site's commenters' bluster about people with vaginas being out of the game, girls have been getting in on the icing, myself included. We live in an equal opportunity icing society, bros and bro-ettes. For weeks, I have been engaged in an ice war with my younger brother -- who isn't a certified bro, but certainly has bro leanings (a fondness for Keystone Light and aggressively patterned shorts). Is it juvenile? Totally. Most things in frat culture lean that way. But is it also hilarious to whip out a pineapple malt beverage from your purse at a movie theater and see that "Oh shit, I've been iced" look? Yes, yes it is.

Women are often excluded from these frat games by definition, but also because of the stereotype that ladies are downers and dudes are all about having fun. (See: Every Judd Apatow film ever.) But in the ice wars, that also gives ladies a pretty clear advantage. Now, I'm not saying that you should go Hatfields vs. McCoys on your friends with this busching thing. The truth is that it's just a pretty amusing and, hopefully, short-lived game. But if Busching is what it takes for women to get in on an enormous male-centric prank war, then I'm all for it.