"Grown Ups": It's time to kill the midlife dude flick 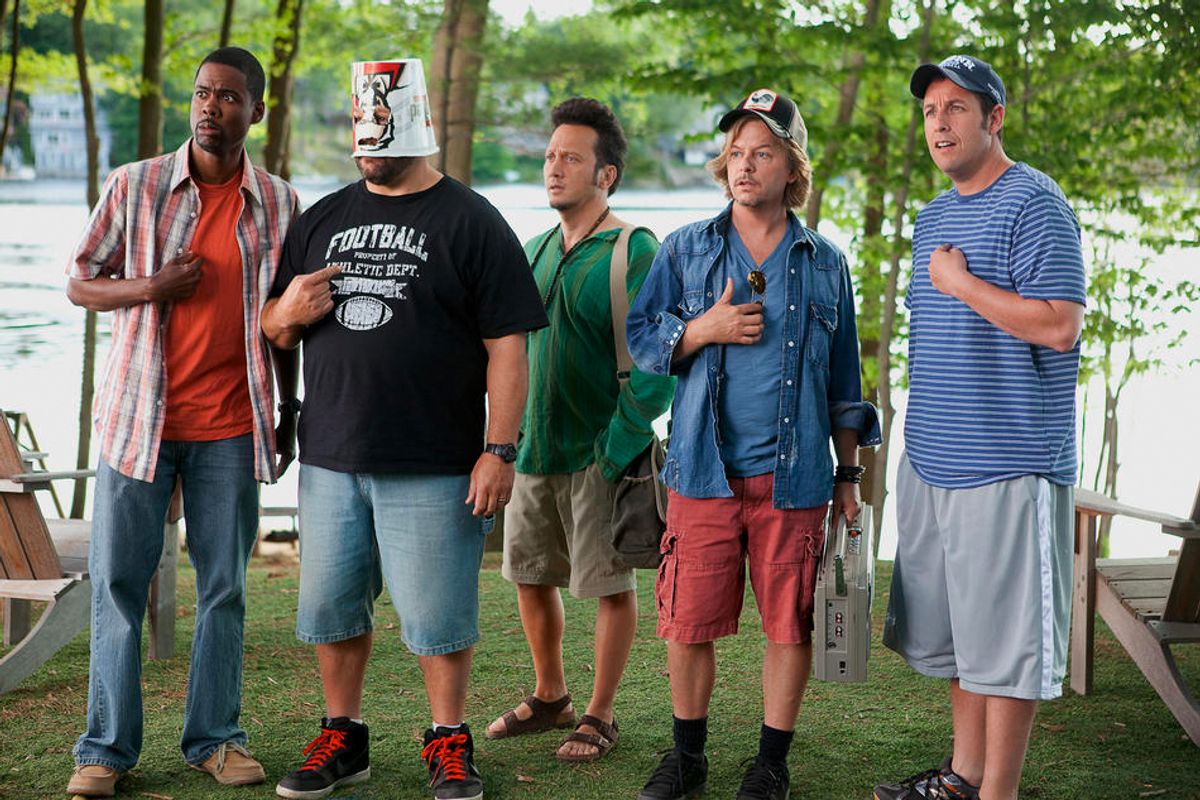 Is there really an entire mini-generation of middle-aged dudes out there who remain totally befuddled by the demands of adulthood and fatherhood and economic self-sufficiency, who find themselves halfway paralyzed between a life of unwashed sweats and Bud-for-breakfast and another one of lawnmowers, pleated shorts and stinky diapers? Yeah, you're right -- it's a rhetorical question and not a very bright one, and you're also right that what I'm really doing is trolling for responses from female readers. Bring it, sisters!

I'm tempted to come at you like a left-wing, post-bohemian version of Glenn Beck, and blame this whole thing on the fatally uncertain parenting of the '60s and '70s. At least as this trend pops up in, uh, pop culture, it reflects the concerns of guys like Judd Apatow (born in 1967), "Old School" and "Hangover" director Todd Phillips (born in 1970), and Adam Sandler (born in 1966), co-writer, producer and star of the highly unfortunate new comedy "Grown Ups."

If you were born in those years to a more-or-less normal North American family, odds are pretty high that your dad was too stoned, too busy chasing tail or too otherwise-checked-out to provide one of those Coors-commercial moments where he informed you that manhood was supposed to be about sucking it up, doing what had to be done and not being a whiny little bitch. More to the point, his "modeling behavior," as we say these days, was somewhere between inconsistent and total crap.

As a product of that general epoch myself, I'm not unfamiliar with the syndrome and I'm not claiming it doesn't exist. (As an up-by-the-bootstraps immigrant, my own father was a veritable fount of inspirational lectures, somewhat undermined by the alcoholic sentimentality and the parade of buxom graduate students. Here's the valuable life lesson Dad taught me: You don't have to be good-looking to get laid a lot.) My question is how much longer we'll have to put up with movies that try to grind a few more laughs out of middle-aged shlubs amazed and alarmed by the fact that the world now expects them to take on some measure of responsibility.

Mind you, I'll happily take the failed-adulthood comedies of Apatow and Phillips and their ilk, from "Old School" to "Knocked Up" to "Hot Tub Time Machine" -- I'll take them, please -- over a condescending and witless paean to supposed real life like Sandler and director Dennis Dugan's "Grown Ups." This duo has a long track record of making dopey hit comedies, from "Happy Gilmore" and "Big Daddy" to "I Now Pronounce You Chuck & Larry" and "You Don't Mess With the Zohan." No, I'm not the world's biggest fan, but compared to "Grown Ups," those movies are the collected works of Orson Welles, Oscar Wilde and God.

It pains me even to give "Grown Ups" this much credit, but as usual Sandler's heart is sort of vaguely in the right place. I'm halfway convinced that, God help us, this is Sandler's version of Renoir's "Rules of the Game" or Bergman's "Smiles of a Summer Night" -- the country-house comedy in which a varied cast of couples is brought together to shine a satirical light on the foibles of Our Society. There are even attempts to build gags around the same basic themes: class warfare, adultery, the lustful vanity of men and the worldly wiles of women. Mind you, those earlier examples were short on jokes about old chicks, fat chicks, ugly chicks, flatulent African-American grandmas, rednecks who suffer disabling injuries and dads who pee in the pool at the water park.

Sandler and Dugan fill those empty niches, and various others, in this rambling yarn about a gang of old pals -- they were teammates on a CYO championship basketball team, somewhere in New England, in 1978 -- brought together for a lake-house reunion after their former coach's demise. It's a failed-comedy trifecta, simultaneously pompous, sentimental and contagiously unfunny. What I mean by that is you find yourself chuckling at a lonely gag that halfway works -- not that I can remember any right now -- and end up shivering with cold sweat, convinced that watching "Grown Ups" has permanently damaged your sanity and intelligence.

Among this movie's abundant crimes is the way it squanders a whole gang of popular comedians on hopelessly hackneyed characters and a string of lame sketches that would have been written out of the second-worst episode of "Two and a Half Men." All it's got is a bunch of free-floating 21st-century male anxiety: Sandler is a Hollywood super-agent with a bitchy fashionista wife (Salma Hayek) and a couple of dipshit kids who play video games all day and abuse the Chinese nanny; Chris Rock is a henpecked house-husband dominated by his wife and sassy mother-in-law; Kevin James is a working-class blowhard with a Caddy convertible and a pack of lies to cover up his failures; David Spade is a perennially hung over perma-bachelor; Rob Schneider is a New Age fake-shaman with a much older wife. (And they actually have sex. It is to hurl! Everyone knows dorky middle-aged guys are entitled to shag much younger women.)

Actually, that description makes "Grown Ups" sound a lot more coherent and purposeful than it actually is. The thing about Sandler and Fred Wolf's screenplay is that almost none of the jokes emerge organically from the characters and their situations, unless you're counting the endless mockery directed at Schneider and his penis-withering, ancient-ass partner (gamely played by Joyce Van Patten, who is indeed 76 years old). It's just a bunch of disconnected chain-yanking: The guys abuse each other in what's meant to be fraternal affection but feels more like the discomfort of being stuck together in a terrible movie. We see close-ups of Rock's mother-in-law's swollen hoof, somebody gets impaled with an arrow, Spade puts on a woman's hat and pees in the closet. Schneider's three adult daughters show up, and it's hard to say what provokes more ribaldry: That the first two are impossibly gorgeous fantasy babes, or that the third is butt-fugly.

But none of the lame and offensive humor in "Grown Ups," not even its extended water-park sequence -- from the summer issue of the Hack Comedy Newsletter: "When all else fails, take 'em to the amusement park!" -- can match the movie's painfully earnest tone of moral edification. Sandler's intolerably spoiled children learn to appreciate the joys of a simpler summertime existence, without Italian chocolates, bottled water or iPhone apps. James' washed-up salesman learns the true value of friendship (i.e., if you get lucky, some of your friends will be rich). Rock and Spade and Schneider's characters learn -- well, they must learn something, but by the end of the movie I was listing Sandler's endless wardrobe of obscure New England sports-related caps and T-shirts, just to distract myself. (The Hartford Whalers! The University of Vermont Whatever-They-Ares!)

As for Sandler's character, who's presented as an amazing guy with a still-perfect bank shot, but who has accidentally wound up as paterfamilias of an incredibly annoying brood, he performs what's supposed to be an act of boundless generosity toward the embittered local redneck (Colin Quinn) who still holds a grudge over losing that long-ago basketball game. But like this painful film, one of the ghastliest Hollywood misfires of recent memory, it isn't an act of generosity at all. It's more like a self-congratulatory vanity project, a masturbatory moment in which a rich and privileged superstar reveals how distant he is from the mythological ordinary people he claims to love.