The Texan and aspiring Oprah host may have cerebral palsy, but his wicked sense of humor teaches us how to fly 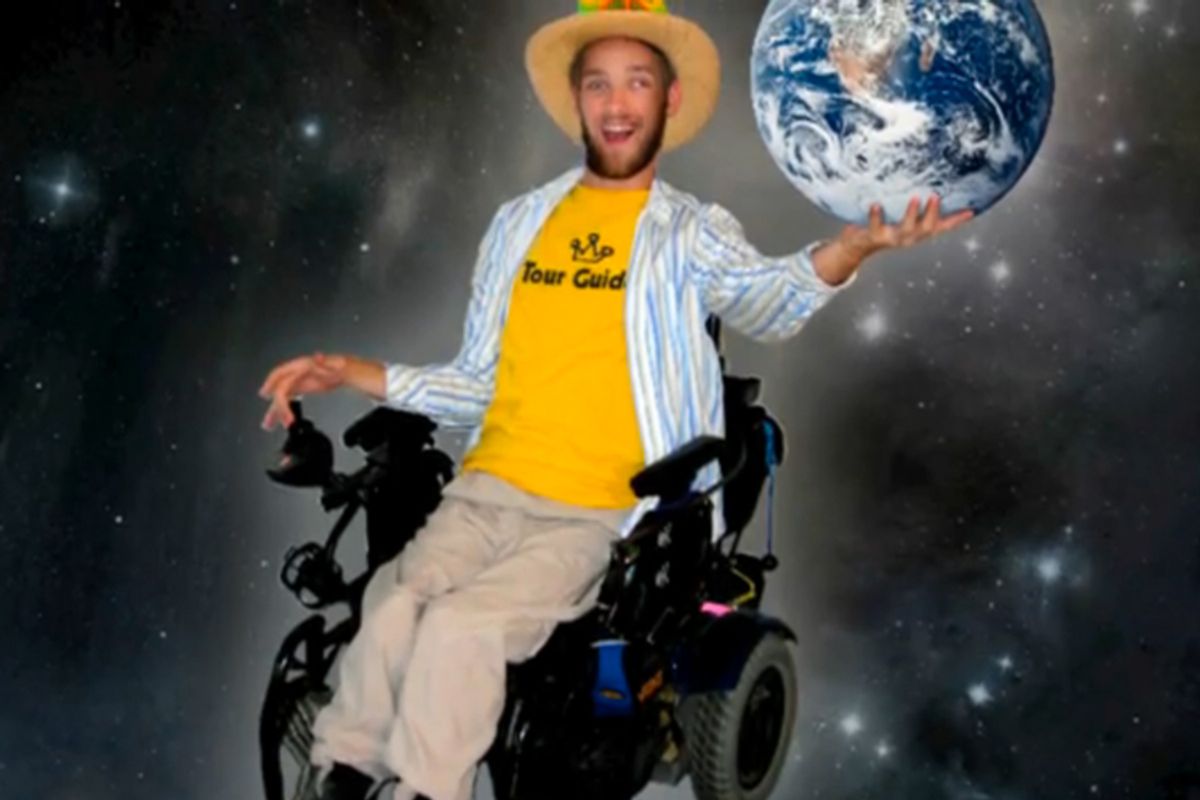 The Internet – it's not just a place for bros to Ice bros; it's where the unlikeliest of stars emerge. And the viral darling of the day is a 25-year-old actor and self-professed babe magnet named Zach Anner – a man who isn't about to let being confined to a wheelchair get in the way of starring in Oprah Winfrey's newest venture.

When the doyenne of daytime put out the call last month for someone to host a show she's developing for her new network, she predictably got the kind of stampeding response one would envision for a dreamy vampire holding the newest iPhone. And in among the cute moms and would-be decorators, there was Zach, an Austin native with cerebral palsy – which he describes dryly as "the sexiest of the palsies." After showing on his audition video why he's not cut out for an exercise or cooking show ("Normally I set my pants on fire"), he makes a bold case for a different kind of show – "a travel show for people who never thought they could travel." Why? "To prove that no obstacle is too big, no mountain is too high, no volcano is too hot and no Atlantis is too underwater or fictional."

And with that, a viral sensation was born.

As the weeks have passed, he's continued to demonstrate his ballsy, up-for-it spirit – and willingness to make out with a wheelchair ramp sign -- in ensuing YouTube clips. And he's been unabashedly, infectiously reciprocal with the love he's been getting from his legion of new fans, saying, "You've made somebody who can't walk at all fly ... You can post on Facebook that we're in a relationship."

But he's had something else going for him too. Because his quest, aside from being  a witty, inspirational tale of an underdog going for the gusto,  has something else the Internet community loves (aside from piano playing kittens): A source coding-related scandal. When, earlier this week, a bubbly schoolteacher named suddenly Phyllis surged ahead in Oprah's competition, seemingly amassing hundreds of thousands of votes within minutes, the geeks were on it like LED on sheep. They posted in detail on Reddit how "Phyllis's VOTE button is coded differently from everyone else's. There's plenty of grounds for suspicion." There were also charts. We've got your back, Zach!

Then, just as abruptly, Phyllis' lead dropped off, and as of today, Zach has over 8,200,000 votes and climbing -- nearly double the count of his next nearest competitor. Which, unsurprisingly, some pranksters from 4Chan have claimed is a result of their own gaming the system. We haven't had this much fun since the 2000 election. The best part? None of it really matters, because after the online contest closes on Saturday, the top five online vote getters will have to compete again against a pool of casting-call candidates for a big showdown later this summer anyway.

But whether some of his votes are the result of clever bot work or not, whether he lands his own television series or not, Anner has already attained something pretty spectacular. He's charmed people who wouldn't be caught dead watching anything with the Oprah insignia anywhere near it. He gave the world something to agree with John Mayer on. And most of all, he reminded the snark-soaked denizens of the Web to laugh first at ourselves. He told ABC this week, "I didn't even know that things like this were possible. Now I know how the people who win the lottery feel." Happy? Hopeful? Like smiling from ear to ear? Zach Anner, every time we watch you, so do we.