This week in crazy: Raymond Domenech 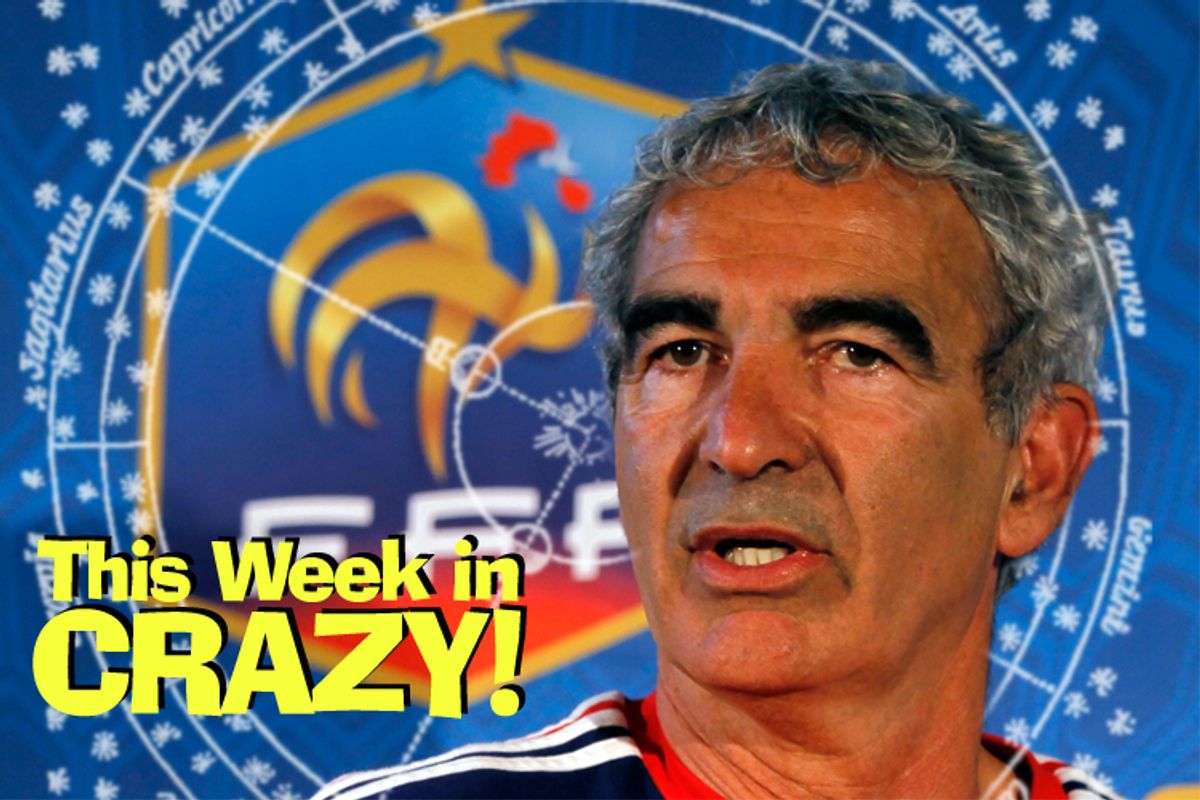 The French team — which won in 1998 and was runner-up in 2006 — scored one goal in three matches. First was a 0-0 draw with Uruguay, then humiliating losses to Mexico and South Africa. In between, the team mounted a one-day work stoppage to protest the expulsion of star forward Nicolas Anelka (for the crime of telling the coach, "Go fuck yourself, you son of a whore"), and they're all returning home to a nation that has united against them.

But any team can melt down. To embarrass all of France before the eyes of the world takes real crazy. And Raymond Domenech delivered.

He was already hated among many French soccer fans for the time he proposed to his girlfriend on live television — "moments after France was eliminated early in the 2008 European championships." To make the whole affair seem even more desperate and pointless, French soccer authorities announced before the Cup began that Domenech would be replaced upon its conclusion.

Domenech did have one ace up his sleeve: He knows how to apply the principles of astrology to soccer strategy. As Domenech said in 2008, "All parameters have to be considered and I have added one by saying there is astrology involved."

And: "When I have got a Leo in defence, I've always got my gun ready. I know he's going to want to show off at one moment or another and cost us."

Asked point blank if a player's star sign would affect his chances of making the team, Domenech acknowledged that it enters into the equation "at the end of the selection process when it is a question of choosing between players of equal ability." Woe unto Scorpios — Domenech doesn't trust them. ("I am not superstitious; it brings bad luck," he's also quoted as saying.)

In South Africa, Domenech displayed his nasty streak after his squad's loss to the host nation on June 21. He refused to shake the opposing coach's hand.

This is just not done in international soccer. South African coach Carlos Alberto Parreira wasn't completely sure what he'd done to deserve the snub, though according to Domenech's assistants, it was because Parreira had criticized a controversial handball goal by the French team that qualified them for the Cup in the first place.

In response to reporters asking about the snub and the French team's collapse, Domenech said, "If these are all the questions you are going to ask me, I am going to leave you, we are not from the same world." You almost have to admire his honesty — I assume the reporters were traditional, Earth-born humans.