How David Vitter got away with it

Three years ago, the "family values" conservative was caught in a hooker scandal. Now, he's cruising to reelection 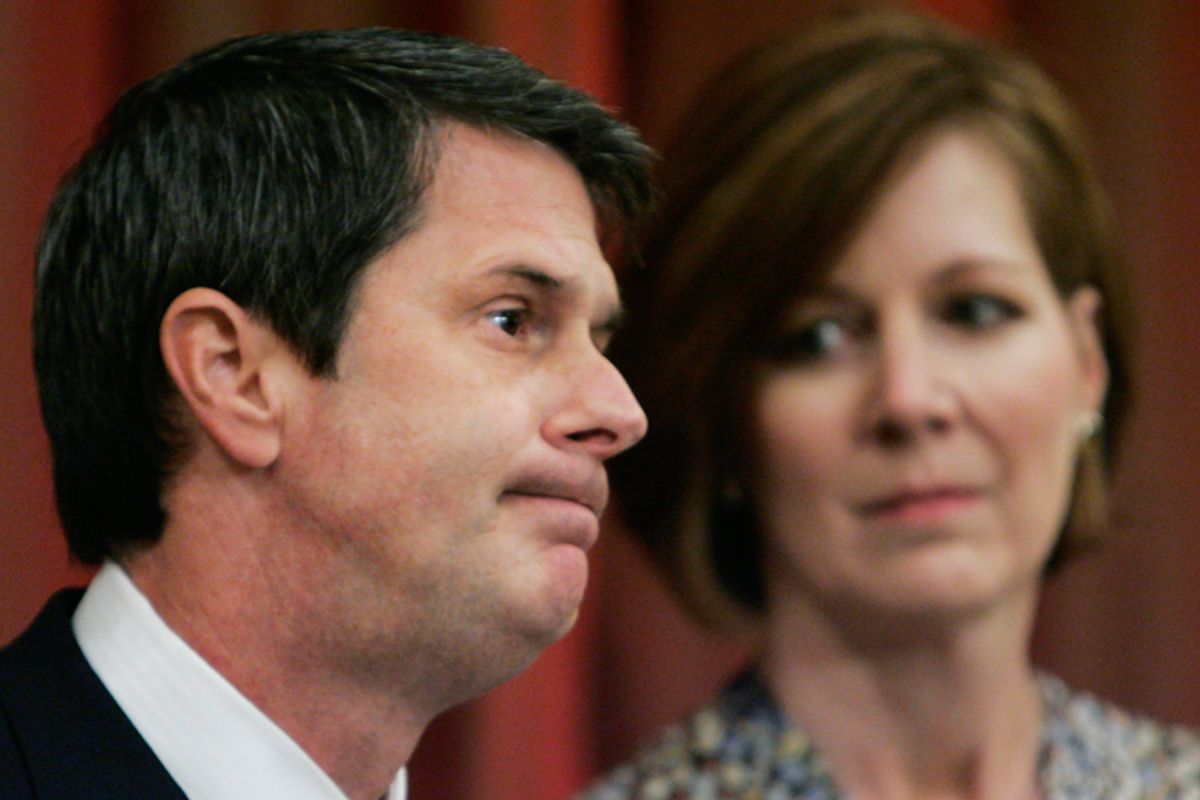 Sometimes the strangest stories in politics are hiding in plain sight. So it is with Sen. David Vitter of Louisiana.

Vitter, a first-term senator, rose to infamy three years ago, when his phone number appeared in the records of the escort agency run by the so-called D.C. Madam, Deborah Jeane Palfrey. In the wake of the disclosure, Vitter made a de facto admission of having paid for sex, confessing to "a very serious sin in my past."

The careers of other Republicans have been vaporized by infractions that could well be viewed as less serious. Last month, Indiana Rep. Mark Souder resigned after admitting to an extramarital affair. A hitherto-obscure California state assemblyman, Mike Duvall, departed last fall after being picked up on an open mic boasting about his amorous activities with women other than his wife.

The taboo that continues to cling to prostitution -- along with the salient fact that soliciting a prostitute is illegal -- would have been enough, one might have thought, to put an end to Vitter’s career. This is especially true given the contrast between his actions and his ardent social conservatism. (The year before he was ensnared in the scandal, Vitter declared himself "a conservative who opposes radically redefining marriage, the most important social institution in human history.")

Yet Vitter does not seem to face any great peril in his battle for reelection in November.

A survey from the Democratic-affiliated Public Policy Polling (PPP) earlier this month gave him a 46-37 lead over his Democratic challenger, Rep. Charlie Melancon. Other polls have given Vitter even wider leads. According to Real Clear Politics' running average, Vitter enjoys an average advantage of 15.7 points. Especially considering the national climate of 2010, and Louisiana's ideological bent, Vitter doesn’t seem to have much to sweat.

Perhaps more important from Vitter’s perspective, no serious challenge has materialized on his right flank. Tony Perkins of the Family Research Council flirted with getting into the race, as did Louisiana Secretary of State Jay Dardenne. In the end, both men stepped back.

"It takes more than one sex scandal to bring down a Louisiana politician," is the salty verdict of John Maginnis, a Baton Rouge-based political journalist who, as the author of a book about the libidinous former Gov. Edwin Edwards, knows what he is talking about. Louisiana voters, Maginnis adds, “are able to separate human failures from one’s performance in office.”

There's more to it than this, though. Vitter is clearly being boosted by President Obama's unpopularity in the state, and by Melancon's low name recognition. But a bigger factor may be a peculiar form of partisanship.

Within the past year, PPP has canvassed Republican voters in three states represented by scandal-dogged GOP politicians: Vitter in Louisiana, Sen. John Ensign in Nevada and Gov. Mark Sanford of South Carolina. (Ensign and Sanford both had extramarital affairs.) In all three cases, the support of Republican voters remained solid. Last year, when Vitter’s embarrassment was fresher in voters’ minds, Republican voters in his home state still gave him a 62-19 approval rating.

"I can guarantee that if it were a Democrat who had committed this crime -- and yes, it is a crime to have sex with a prostitute! -- the Republicans would have demanded his head, or at least jail time," Daniels tells Salon via e-mail.

Some have suggested that conservatives have rallied around Vitter because they see him as a victim of an attack from the purportedly liberal media, though many doubt this claim.

"There really hasn’t been an active rallying around him as such," Brian Brox, an assistant professor of political science at Tulane University, says. "It’s more that he handled [the scandal] probably as well as someone can handle something like this, and also that he is about as socially conservative as you could get."

Brox also notes that Vitter is "already running in very favorable conditions." In the 2008 presidential election, Obama lost Louisiana to John McCain by 19 points, securing less than 40 percent of the vote.

A Rasmussen poll earlier this year showed that Vitter’s opposition to Obama’s healthcare reform package was shared by around 58 percent of his constituents. (Melancon, a Blue Dog Democrat, was also opposed to healthcare reform, though he does not support efforts to repeal it, which Vitter does.)

The Melancon campaign clings to internal polling that suggests Vitter’s support is shallow. A February survey done for the campaign indicated that 47 percent of Louisiana voters would prefer “someone new” as senator whereas only 43 percent said they would probably or definitely vote for Vitter. The same survey indicated that only 59 percent of Louisianans recognized Melancon’s name, against 92 percent for Vitter.

“The more voters learn about Charlie Melancon, the more support Charlie gets. That’s why David Vitter is the most endangered Republican senator up for reelection this fall,” Melancon campaign spokesman Jeff Giertz asserts.

A skeptic might point out that Vitter doesn't have much competition for the "most endangered" title: Among other incumbent Republican senators, only North Carolina’s Richard Burr is in anything approaching serious trouble.

Another of Vitter’s advantages is that the scandal hit in the middle of his term, giving him three years to recover -- and voters three years to forget. Democrats will surely take the opportunity to nudge voters’ memories. It may be politically difficult for Melancon to raise the issue himself, but John Maginnis is among those who believe that "as we get closer to the election, it will be the outside groups that will bring up the character issue."

Asked if Democrats intend to bring up the prostitution issue, state party spokesman Kevin Franck replies, "Yes -- because it’s clear from [Vitter’s] involvement in the scandal that he does not share the same values as Louisiana families."

Democrats are also pushing a story that emerged last week about a Vitter aide, Brent Furer, who pleaded guilty in 2008 to misdemeanor charges relating to a dispute with an ex-girlfriend. Vitter had known of the domestic incident for two years, a spokesman told the Associated Press, but ultimately kept Furer on staff. Vitter accepted Furer’s resignation last week after learning that there was still a live warrant for the aide’s arrest in Baton Rouge in relation to a DWI charge.

For his part, Vitter has of late focused on issues such as opposing the moratorium on deep-water drilling imposed by Obama in the wake of the BP oil spill.

As for the scandal itself, he told the New York Times last year, "I addressed it very directly in 2007 and said it was a very serious sin and apologized very directly. I’ve said that, and I’m sure I’ll repeat that."

There is another element to Vitter’s resilient popularity worth mentioning: the nature of his offense. His encounter was (presumably) with a woman; the fact that he used an escort agency rather than picking up a prostitute from a street corner; that rumors of other similar episodes have not been substantiated; that he has stayed with his wife and family: All of this probably helps his case seem less egregious than, say, the male restroom arrest that ended Idaho Sen. Larry Craig’s career.

"Same-sex [scandal] would be a killer," Maginiss says. "Or even if there was evidence that this is part of a pattern of continuing behavior -- that would be hard to overcome."

Jessi Fischer, a California-based writer on sexuality who blogs as "The Sexademic," suggests that the contrast between the cases of Vitter and Craig "is significant because when you are talking about people having a kind of moral panic, often what we are talking about is the crossing of boundaries. That could be when the two people are of the same sex, but something like race and the crossing of racial boundaries affects these things as well."

"You can’t cross too many boundaries at once," she advises.

Perhaps, then, David Vitter’s walk on the wild side may not have been quite wild enough to extinguish his career. The immortal boast of Edwin Edwards, the roguish ex-governor, comes to mind: "The only way I can lose is if I'm caught in bed with either a dead girl or a live boy." The same may go for David Vitter.