GOP on Kagan: Will she fight for civil rights of rich, powerful? 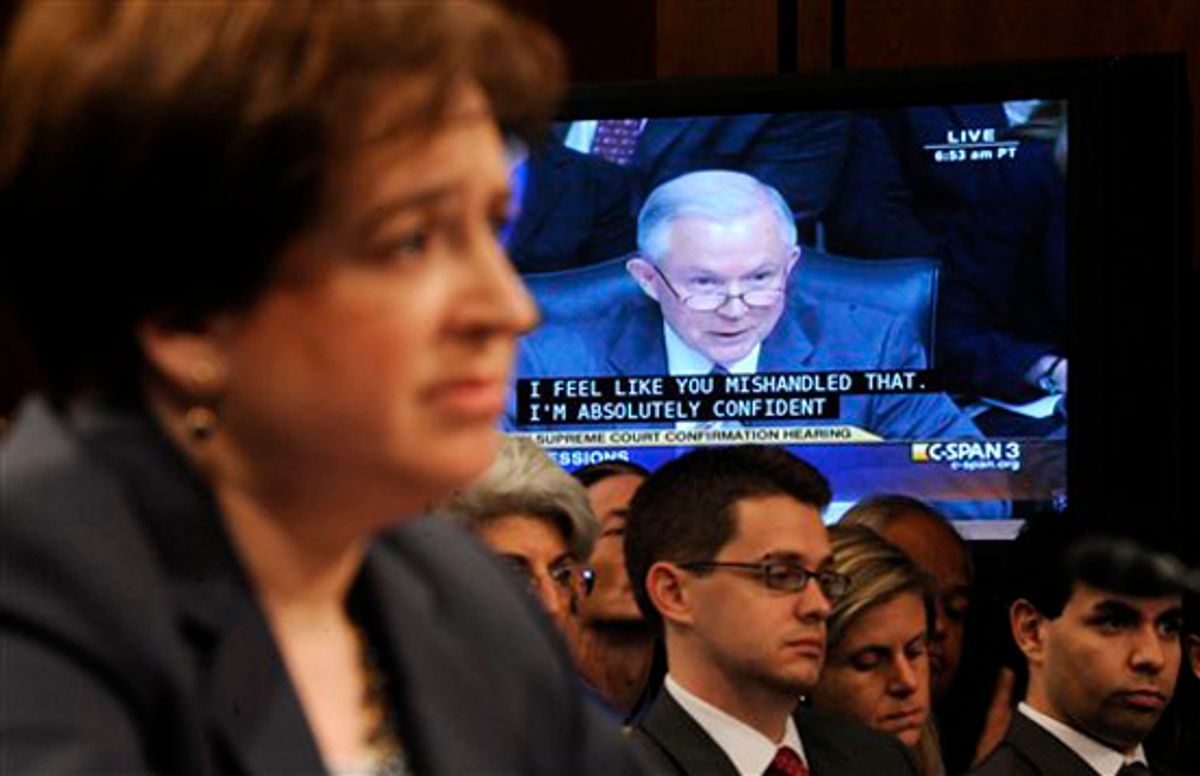 Yesterday, the Republican members of the Senate Judicial Committee opened the Elena Kagan confirmation hearings by, perhaps unwisely, putting Thurgood Marshall on trial. Today, they're laying off Marshall, but they're making it clear that they believe the court's job is to always defend the rights of the powerful.

Republicans brought Marshall up 35 times yesterday, with unrepentant racist scumbag Jeff Sessions and Arizona's Jon Kyl leading the charge against that terrible activist liberal judge who hated the Constitution. (Later, asked to name any single Marshall decision or opinion they disagreed with, Sessions and Orrin Hatch and Tom Coburn could not, really. Because that would've given away the game.)

And, for some reason, John Cornyn approvingly quoted a far-right secessionist novelist guy.

But while the Republicans hate Thurgood Marshall for extending those damn "special protections" (like regular protections, but for non-white people) to minorities, they want to make it clear that they expect any potential Supreme Court justice to always support the rights of their favorite put-upon minority groups: the United States military, incumbent senators, Republican presidential candidates, and corporations.

After Pat Leahy's interminable opening questions about how much Kagan loved her parents and how nice and well-respected she is, Sessions began hammering her on the military recruiters thing. The issue was, the military was unable to sign Harvard's nondiscrimination pledge, because it is, you know, a discriminatory employer. So it had to use the veterans' organization instead of the Harvard Office of Career Services.

Orrin Hatch questioned Kagan on the Citizens United case. Kagan, obviously, argued that case, which would seem to make her position on the matter of the constitutionality of campaign finance laws known. But she told Hatch that as a judge, she would consider it "settled law."

Hatch nearly got teary-eyed when discussing the poor corporations of Utah that were discriminated against by campaign finance laws. Why does Kagan hate Utah's thousands of corporations that are made up of only one person? (Though theoretically this one-person corporation could conduct political speech as a one-person ,,, person.)

The conversation got weird when Hatch seemed to claim that restrictive campaign finance laws were somehow not bad for incumbents:

"Tell that to Blanche Lincoln," Hatch says. "Lincoln is one of the nicest people around here who had ten million spent against her by the unions, just because they disagreed with her."

OK, but ... Blanche won. And doesn't Orrin think money is protected political speech? And if so, isn't spending money to defeat her because you disagree with her policies ... basically the entire point of politics? Unless Orrin wants Kagan to decide that unions aren't allowed to be mean to his Senate friends, I guess.

Hatch was also outraged that the president criticized the Citizens ruling ... while the Supreme Court was in the same room as him. The nerve! The court is very sensitive! Obama should've formed a one-man corporation in Utah and bought thousands of TV ads, if he wanted to exercise his right to express an opinion on the decision.

Kagan is expected to be easily confirmed because this whole thing is basically a fun way for the Senate to pass the time without having to pass legislation or anything.