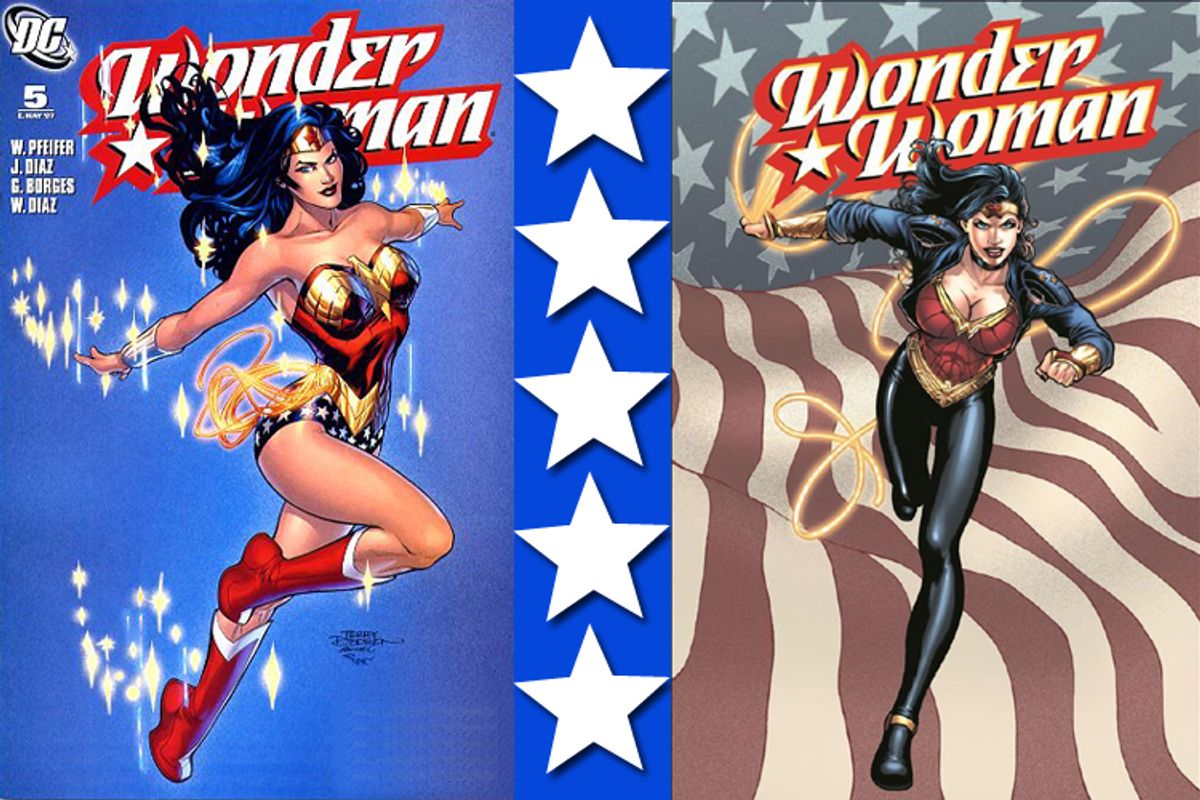 Olivia Munn may think she can suck it, but Wonder Woman is still one of the greatest role models in the superhero -- and sartorial -- pantheon. So when DC announced that the lady who's done more for red boots than Hannah Storm herself  was getting her first makeover in decades, the news was not universally greeted with enthusiasm.

Starting with Wednesday's new issue of "Wonder Woman," the Amazonian alter ego of Diana Prince will sport a revamped "street-fighter’s look" designed by artist and DC Comics co-publisher Jim Lee. She's still got the lasso and the bracelets, because a girl needs her accessories, but she's now also crime fighting in a jacket, low heels and, brace yourself, pants. She doesn't even have an eagle on her rack. The uniform change comes as part of that old saw -- the character reboot -- in a storyline that casts Wonder Woman as a city chick who knows little of her Paradise Island roots.

In her Deadline column Wednesday, Nikki Finke was quick to blast that "DC Comics has ruined Wonder Woman!" with her "Goth Day at the Sherman Oaks Galleria" get-up, while commenters on Wired bewailed the new look as as "wrong wrong wrong." Where's Tim Gunn when we need him?

That she can now, in the words of series writer (and "Babylon 5" creator) J. Michael Straczynski, "close it up to pass unnoticed ... open it for the freedom to fight ... lose the jacket or keep it on" does reflect a certain admirable practicality. But for generations of fans, Wonder Woman's unabashed flashiness was part of our heroine's bold appeal. She doesn't have to be a sexpot falling out of her strapless top, but couldn't DC have brought in a designer with a feel for her warrior princess nature to oomph it up a bit? You know what's super about a jacket? Nothing.

Jim Lee may insist, "She still is supposed to be sexy," but her sexiness isn't really the issue. Any franchise that could give us so many heroes in capes should have a better grip on the notion that it's never just about saving the world -- it's about looking fabulous doing it.