Is it racist? No, more like a boring and incoherent $280 million mashup of sci-fi and fantasy cliches 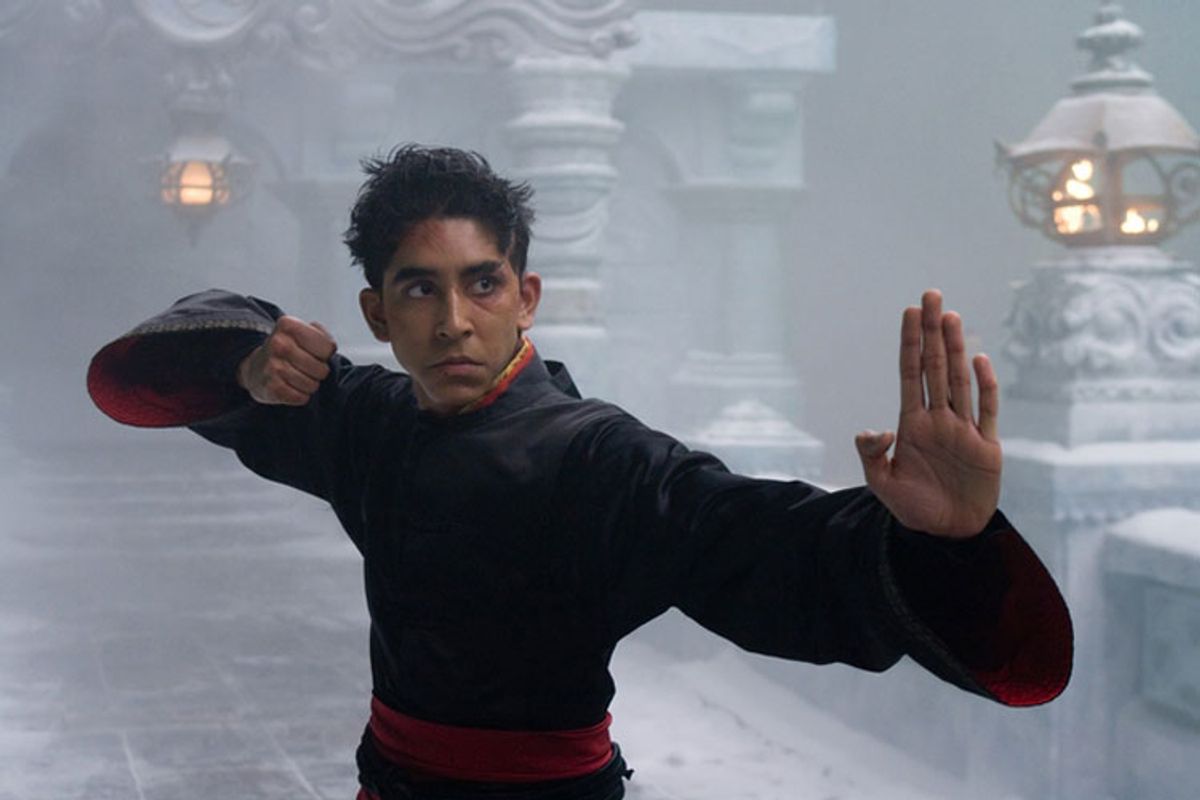 Dev Patel in "The Last Airbender"
--

Ever since his explosive emergence with "The Sixth Sense" in 1999, writer-director M. Night Shyamalan has built a highly successful career out of sentimental, supernatural movies with increasingly idiotic third-act "reveals," as they say in the screenwriting trade. They're all dead and living in heaven, or possibly Pennsylvania! Aliens hate hot dogs, apple pie and baseball! The whole story is happening at a Renaissance Faire! It was all a dream! Bruce Willis is ... an overpaid Republican with a goony smile!

At least that's how I remember them. With this formula having reached the point of diminishing returns several movies ago -- certainly by the ludicrous "Lady in the Water," if not all the way back to "Unbreakable" -- Shyamalan has now sought therapy for his addiction, in the form of making the most thoroughly predictable story you can imagine. Adapted from a popular children's animated series, "The Last Airbender" is a generic mishmash of themes, images and ideas drawn from a long list of quest narratives and science-fiction classics. It's a little bit Tolkien, a little bit Lucas, a little bit "Matrix," a little bit "Dune" and rather too much Philip Pullman, all stuck together with some powerfully expensive effects and lots of cute kids doing tai chi.

I can see why Shyamalan was attracted to this material, but the results are clunky even by his recent standards. What we've got here is a completely acceptable rainy-Saturday time-waster for kids -- to whom the jumbled collection of clichés and archetypes presumably won't seem so third-hand -- pumped up to the level of unsustainable grandiosity thanks to Hollywood's economy of stupefaction. With a reported production budget of $280 million, and the inevitable post-production "up-conversion" to murky, light-robbing 3-D, "The Last Airbender" is meant to be a franchise-launching worldwide phenomenon. Maybe it'll get there; I claim no expertise in gauging public taste. But Shyamalan spends so much of the movie trying to dazzle us with bigness and self-importance that he forgets to tell a good story. Or much of any story, really.

This is one of those movies where the plot can't just happen; it has to arrive at your door like a series of singing telegrams. We've got an opening text-crawl right out of one of the bewildering, second-string "Star Wars" films, written in pseudo-ancient prose full of phrases like "amongst all the peoples of the world." There's voice-over narration every so often, from a young semi-magical "Waterbender" named Katara (Nicola Peltz), along with on-screen titles letting us know we're now in the "Northern Air Temple" or "Fire Nation Colony 15" or wherever. Even with that, every scene in the movie involves more yakkety-yak explication -- what happened to some people we don't know about, a long time ago, to set up what's happening now -- just so we can limp along to the next CGI action sequence.

See, there once was peace, love and understanding amongst all them peoples, who are divided into four semi-rivalrous element-based clans: the Air Nation, Water Nation, Fire Nation and Earth Nation. There is one transcendent leader called the Avatar -- he gets endlessly reincarnated, after the fashion of a Tibetan lama -- who keeps these nations at peace, but he disappeared a century ago, and the steampunkish Fire Nation, rocking a Nazi-Mordor Industrial Revolution ethos, is bent on conquering the world. Katara and her brother Sokka (Jackson Rathbone), members of an isolated Water Nation outpost, find a little boy frozen in the ice. He's the missing Avatar, naturally -- last survivor of the all-but-exterminated Air Nation -- and they set out to save the world. If that sounds like a pile of spoilers, uh, no. That's what I learned in the first 10 minutes of the film, before I began exercising my own magic powers and writing shopping lists with my mind. Did my wife say laundry detergent or dishwasher detergent?

As Aang (played by 12-year-old Noah Ringer), the Avatar discovered in the permafrost alongside his faithful fuzzy flying companion -- it's like a giant Ewok, cross-bred with Mothra -- begins to assume his full powers, the effects budget takes over the movie, which definitely raises both the "wow" factor and the pure silliness. Aang can go into spooky trances, with what looks like a light-up One Way arrow on his head, where he seeks advice from a dragon-spirit in a misty cave. As a born Airbender, he can summon impressive windstorms, and the insufferably New Age priestly caste of the Water Nation will soon teach him their Zen-psychotherapy approach to controlling the wet stuff as well.

Despite the Internet uproar launched by some fans of the animated series "Avatar: The Last Airbender" (which was going to be the title of this movie, until, uh, other forces intervened), I have to say that the racial controversy around this movie is overblown. It's true that Shyamalan has cast white actors as the principal protagonists (although Aang's race and color are ambiguous), and no doubt marketing concerns played a role. It's also true that he depicts the charismatic villains of the Fire Nation as South Asian in appearance (and Shyamalan himself was born in India). Indeed, the only truly interesting or complicated character in this whole movie is the Fire Nation's exiled Prince Zuko, played by Indo-British actor Dev Patel (star of "Slumdog Millionaire"). Katara and Sokka's Water Nation is depicted as a mix of white and Central Asian or Inuit people, while the Earth Nation's people, although barely seen here, are East Asian in appearance.

With Katara, Sokka and Aang holed up in the Water Nation's icebound northern stronghold, the Fire Nation's nefarious Commander Zhao (Aasif Mandvi) arriving with a vast, smoke-belching navy, and tormented Prince Zuko skulking around the margins like the freelance Gollum-type he is, "The Last Airbender" cranks itself up to a lumbering, impressive -- and no doubt monumentally expensive -- final battle scene. But I never get the feeling that Shyamalan is much interested in this clumsily rendered narrative or its characters. "The Last Airbender" feels like hackwork -- gorgeous and elaborate hackwork, at times -- and as crazy as some of Shyamalan's movies have been (well, OK, all of them), he's never been guilty of that.

It may not be accidental that Zuko, the boyish Indian prince cut off from his own people and bitterly alone, is the only character in "The Last Airbender" who seems to possess an individual personality. He's trying to navigate complicated ties of blood, honor, mystery and magic, while everybody else stands around explaining the past, declaiming platitudes and occasionally kicking some ass. For kids and tweens who loved the Nickelodeon series, the latter qualities may be enough. But even though great acts of magic are performed and great sacrifices made, etc., it's all instantly forgettable. Except for Zuko, sitting alone in a cafe mourning what he has lost and can never get back, looking as if he can see dead people.