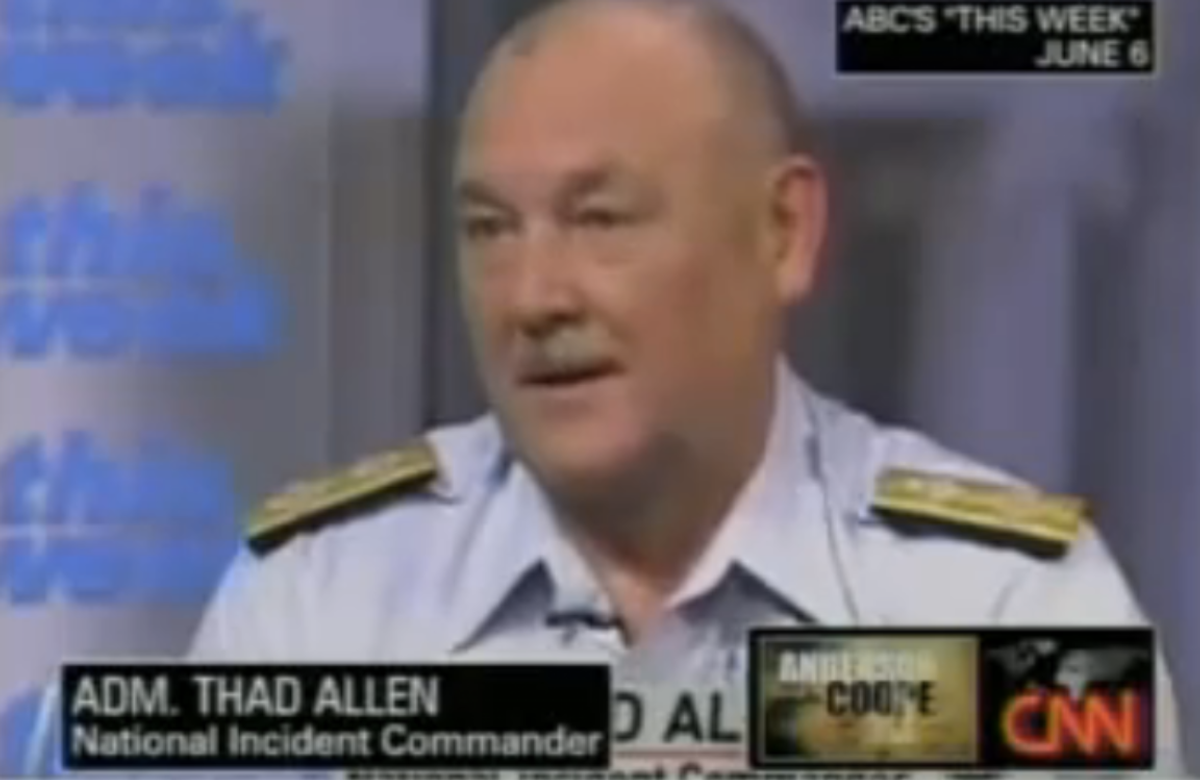 Last week, I interviewed Mother Jones' Mac McClelland, who has been covering the BP oil spill in the Gulf since the first day it happened.  She detailed how local police and federal officials work with BP to harass, impede, interrogate and even detain journalists who are covering the impact of the spill and the clean-up efforts.  She documented one incident which was particularly chilling of an activist who -- after being told by a local police officer to stop filming a BP facility because "BP didn't want him filming" -- was then pulled over after he left by that officer so he could be interrogated by a BP security official.  McClelland also described how BP has virtually bought entire Police Departments which now do its bidding:  "One parish has 57 extra shifts per week that they are devoting entirely to, basically, BP security detail, and BP is paying the sheriff's office."

Today, an article that is a joint collaboration between PBS' Frontline and ProPublica reported that a BP refinery in Texas "spewed tens of thousands of pounds of toxic chemicals into the skies" two weeks before the company's rig in the Gulf collapsed.   Accompanying that article was this sidebar report:

A photographer taking pictures for these articles, was detained Friday while shooting pictures in Texas City, Texas.

The photographer, Lance Rosenfield, said that shortly after arriving in town, he was confronted by a BP security officer, local police and a man who identified himself as an agent of the Department of Homeland Security. He was released after the police reviewed the pictures he had taken on Friday and recorded his date of birth, Social Security number and other personal information.

The police officer then turned that information over to the BP security guard under what he said was standard procedure, according to Rosenfield.

No charges were filed.

Rosenfield, an experienced freelance photographer, said he was detained shortly after shooting a photograph of a Texas City sign on a public roadway. Rosenfield said he was followed by a BP employee in a truck after taking the picture and blocked by two police cars when he pulled into a gas station.

According to Rosenfield, the officers said they had a right to look at photos taken near secured areas of the refinery, even if they were shot from public property. Rosenfield said he was told he would be "taken in" if he declined to comply.

ProPublica's Paul Steiger said that the reporting team told law enforcement agents that they were working on a deadline for this story about that facility, and that even if DHS agents believed they had a legitimate reason to scrutinize the actions and photographs of this photographer, there was no reason that "should have included sharing them with a representative of a private company."

These are true police state tactics, and it's now clear that it is part of a pattern.  It's been documented for months now that BP and government officials have been acting in unison to block media coverage of the area; Newsweek reported this in late May:

As BP makes its latest attempt to plug its gushing oil well, news photographers are complaining that their efforts to document the slow-motion disaster in the Gulf of Mexico are being thwarted by local and federal officials -- working with BP -- who are blocking access to the sites where the effects of the spill are most visible. More than a month into the disaster, a host of anecdotal evidence is emerging from reporters, photographers, and TV crews in which BP and Coast Guard officials explicitly target members of the media, restricting and denying them access to oil-covered beaches, staging areas for clean-up efforts, and even flyovers.

The very idea that government officials are acting as agents of BP (of all companies) in what clearly seem to be unconstitutional acts to intimidate and impede the media is infuriating.  Obviously, the U.S. Government and BP share the same interest -- preventing the public from knowing the magnitude of the spill and the inadequacy of the clean-up efforts -- but this creepy police state behavior is intolerable.  In this latest case, the journalists were not even focused on the spill itself, but on BP's other potentially reckless behavior with other refineries, and yet there are DHS agents and local police officials acting as BP's personal muscle to detain, interrogate, and threaten a photographer.  BP's destructive conduct, and the government's complicity, have slowly faded from public attention, and there clearly seem to be multiple levels of law enforcement devoted to keeping it that way, no matter how plainly illegal their tactics are.

Journalists who come too close to oil spill clean-up efforts without permission could find themselves facing a $40,000 fine and even one to five years in prison under a new rule instituted by the Coast Guard late last week.

It's a move that outraged observers have decried as an attack on First Amendment rights. And CNN's Anderson Cooper describes the new rules as making it "very easy to hide incompetence or failure". . . .

[S]ince "oil spill response operations" apparently covers much of the clean-up effort on the beaches, CNN's [] Cooper describes the rule as banning reporters from "anywhere we need to be" . . . .

A "willful" violation of the new rule could result in Class D felony charges, which carry a penalty of one to five years in prison under federal law.

The new rule appears to contradict the promises made by Adm. Thad Allen, the official leading the Coast Guard's response to the oil spill.

"Media will have uninhibited access anywhere we're doing operations, except for two things, if it's a security or safety problem," Allen told ABC News in June. . . .

"[T]o create a blanket rule that everyone has to stay 65 feet away from boom and boats, that doesn't sound like transparency," [said Cooper].

The rule has come under severe criticism not only from journalists but from observers and activists involved in the Gulf Coast clean-up.

"With this, the Gulf Coast cleanup operation has now entered a weird Orwellian reality where the news is shaped, censored and controlled by the government in order to prevent the public from learning the truth about what's really happening," writes Mike Adams at NaturalNews. . . .

Reporters have been complaining for weeks about BP, the Department of Homeland Security and the Coast Guard working to keep reporters away from wrenching images of oil-covered birds and oil-soaked beaches.

We've frequently heard excuses that the Federal Government has little power to do anything to BP, but they certainly seem to have ample power to do a great deal for them.  Public indifference about such things is the by-product of those who walk around like drones repeating the mantra that political officials know what's best about what must be kept secret, and that the Threat of Terrorism (which is what is exploited to justify such acts) means we must meekly acquiesce to such powers in the name of Staying Safe.

Journalists struggling to document the impact of the oil rig explosion have repeatedly found themselves turned away from public areas affected by the spill, and not only by BP and its contractors, but by local law enforcement, the Coast Guard and government officials.

To some critics of the response effort by BP and the government, instances of news media being kept at bay are just another example of a broader problem of officials’ filtering what images of the spill the public sees.

This is clearly a deliberate and systematic pattern of preventing access and coverage that has been going on since the beginning of the spill.  And, as we find in so many realms, it's impossible to know where government actions end and corporate actions begin because the line basically does not exist.