"It was just a matter of time that some of the oil would find its way to Texas," says marine physicist 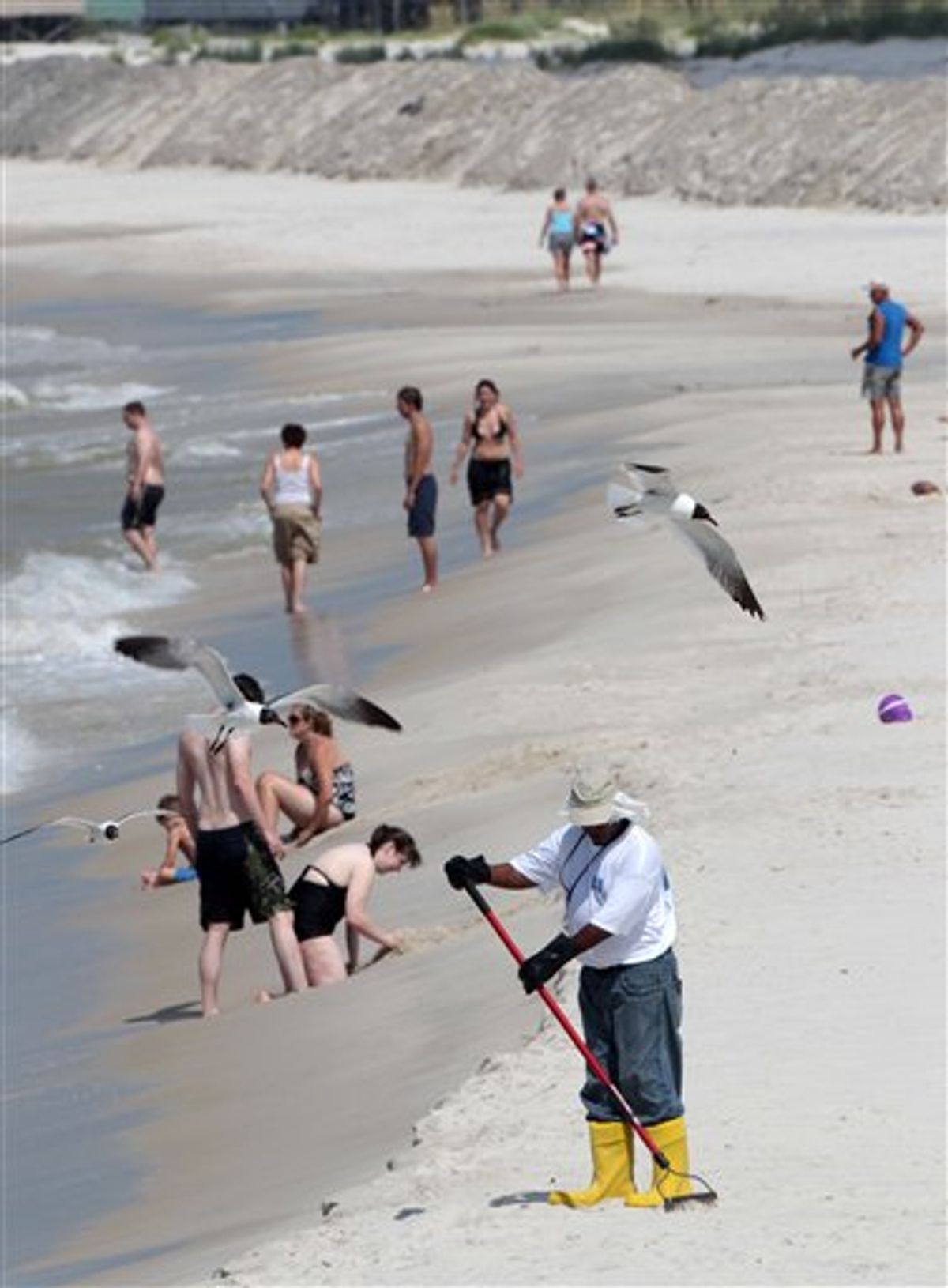 An oil cleanup worker rakes the sand along the beach in Dauphin Island, Ala., on Sunday, July 4, 2010. Workers nearly outnumbered tourists on the beach. Oil from the Deepwater Horizon disaster continues to wash ashore along the Alabama and Florida coasts. (AP Photo/Dave Martin) (AP)
--

More than two months after oil from BP's blown-out seafloor well first reached Louisiana, a bucket's worth of tar balls that washed onto a pair of Texas beaches means the crude has arrived in every Gulf state.

Oil is still on the move, but the fleet of skimmers tapped to clean the worst-hit areas of the Gulf of Mexico is not. A string of storms has made the water too choppy for the boats to operate for more than a week off Florida, Alabama and Mississippi, even though the gusher continues.

The number of tar balls discovered in Texas is tiny compared to what has coated beaches in other Gulf states. Still, it provoked the quick dispatch of cleaning crews and a vow that BP PLC will pay for the trouble.

"Any Texas shores impacted by the Deepwater spill will be cleaned up quickly and BP will be picking up the tab," Texas Land Commissioner Jerry Patterson said in a news release.

The oil's arrival in Texas was predicted Friday by an analysis from the National Oceanic and Atmospheric Administration, which gave a 40 percent chance of crude reaching the area.

"It was just a matter of time that some of the oil would find its way to Texas," said Hans Graber, a marine physicist at the University of Miami and co-director of the Center for Southeastern Tropical Advanced Remote Sensing.

About five gallons of tar balls were found Saturday on the Bolivar Peninsula, northeast of Galveston, said Capt. Marcus Woodring, the Coast Guard commander for the Houston/Galveston sector. Two gallons were found Sunday on the peninsula and Galveston Island, though tests have not yet confirmed the oil's origin.

Woodring said the consistency of the tar balls indicates they could have been spread to Texas water by ships that have worked out in the spill. But there's no way to confirm how they got there.

Galveston Mayor Joe Jaworski said he believed the tar balls were a fluke, rather than a sign of what's to come.

"This is good news," he said. "The water looks good. We're cautiously optimistic this is an anomaly."

Hurricane Alex, which blew through the Gulf last week and made landfall along the border between Texas and Mexico, may have played a small role in bringing the oil ashore in Texas by increasing the westerly current near land, Graber said. But it was more likely due to normal coastal currents and local weather patterns.

The distance between the western reach of the tar balls in Texas and the most eastern reports of oil in Florida is about 550 miles. Oil was first spotted on land near the mouth of the Mississippi River on April 29.

The spill is reaching deeper into Louisiana. Strings of oil were seen Monday in the Rigolets, one of two waterways that connect the Gulf with Lake Pontchartrain, the large lake north of New Orleans.

"So far it's scattered stuff showing up, mostly tar balls," said Louisiana Office of Fisheries Assistant Secretary Randy Pausina. "It will pull out with the tide, and then show back up."

Pausina said he expected the oil to clear the passes and move directly into the lake, taking a backdoor route to New Orleans.

The news of the spill's reach comes at a time when most of the offshore skimming operations in the Gulf have been halted by choppy seas and high winds. A tropical system that had been lingering off Louisiana flared up Monday afternoon, bringing heavy rain and winds.

Last week, the faraway Hurricane Alex idled the skimming fleet off Alabama, Florida and Mississippi with choppy seas and stiff winds. Now they're idled by the smaller storms that could last well into this week.

Officials have plans for the worst-case scenario: a hurricane barreling up the Gulf toward the spill site. But the less-dramatic weather conditions have been met with a more makeshift response.

Skimming across the Gulf has scooped up about 23.5 million gallons of oil-fouled water so far, but officials say it's impossible to know how much crude could have been sucked up in good weather because of the fluctuating number of boats and other variables.

Jerry Biggs, a commercial fisherman in Pass Christian, Miss., who has had to shut down because of the spill, is now hiring out his 13 boats and 40-man crew to BP for cleanup. He said skimming is severely hampered by the weather.

"This isn't going away. This isn't a sneeze or a hiccup. This is diarrhea for a long time," he said. "My lifestyle is screwed. It's over. The thing that I love the most I'm not going to be able to do anymore."

The British company has now seen its costs from the spill reach $3.12 billion, a figure that doesn't include a $20 billion fund for damages the company created last month.

The storms have not affected drilling work on a relief well BP says is the best chance for finally plugging the leak. The company expects drilling to be finished by mid-August.