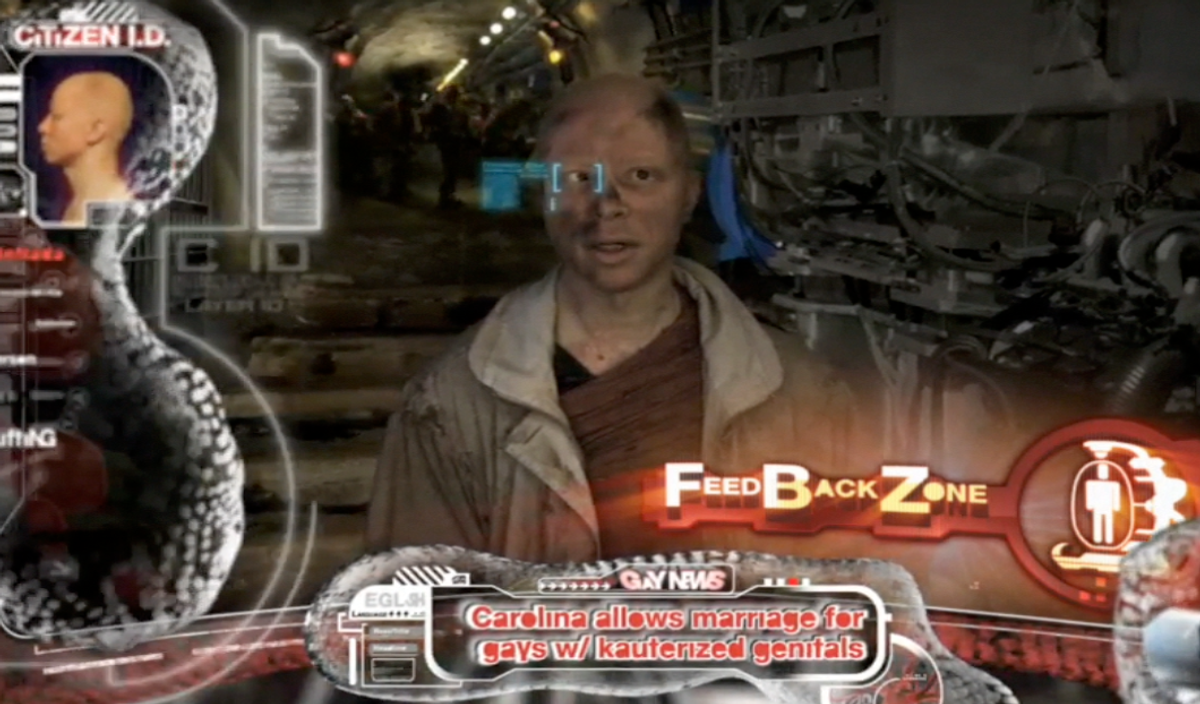 How much would you pay to laugh? The $13 for a ticket to "Get Him to the Greek"? The cover and two-drink minimum at Gotham Comedy Club? The zero it costs to watch "Prom Date" or last night's "Daily Show"? How about two bucks? That's how much the Onion's experimental new offering "Future: News From the Year 2137" will set you back on iTunes, which is either a bargain or highway robbery, depending on how you spin it.

While the idea of paying for America's Finest News Source, which has been giving us brilliant videos free on Onion News Network for ages now, seems as crazy as a squandered stay of execution, Onion's betting that the same loyal fans who made hits of its coffee table-worthy books will pony up for the extra frills of a special effects-laden, 12-minute opus.

Through the Onion's "state-of-the-art wormhole satellite," "2137" gives us an impressively high-tech look at what our beleaguered descendants are in for. The bad news is that the year 2137 is an even bigger dystopian mess than 2010, a world where, alas, the promised sweet release of mankind's imminent destruction keeps getting pushed back because of technical malfunctions. In other news, the fighting continues between the "one remaining Palestinian and one remaining Israeli," gay marriage is still being debated "for the sake of America's packs of feral children," and giant man-eating beetles roam free. Most terrifying of all, newscasters address each other with "How it do?" and "What it is." As one man on what's left of the street gripes, "If I could remove my obedience chip, I'd just kill myself." The good news is, we finally got those hoverboards! Only the Onion could give us "a massacre-watching party turned deadly" with the same smartass seriousness of a Fox anchor, or the breezy final scores for last night's "rape ball game," and for that we adore it.

While its "Mad Max" vision of tomorrow has all the rapid-fire wit and generous use of profanity that one would expect from our beloved satire site, it'd be nice if it had gone further in its imaginings and relied less on the kind of "gay news" and Suri Cruise jokes that wouldn't seem out of place in a current edition. And while that dense, "Lawnmower Man" meets CNN fake broadcast certainly rewards repeat viewings with its Easter eggs of gags, it's also a hell of a headache maker.

Did we need all those bells and whistles from the attention-disordered deficit next century? Nah. But for all the hilariously awful news from our terrible future it delivers -- and for giving us the word "fuckage" -- those two measly dollars more than free seems like money well spent. Because by the time Onion news-giver Zesty Lewis chirps, "Well, I've shot my news load," you can't help feeling pretty gloriously spent yourself.