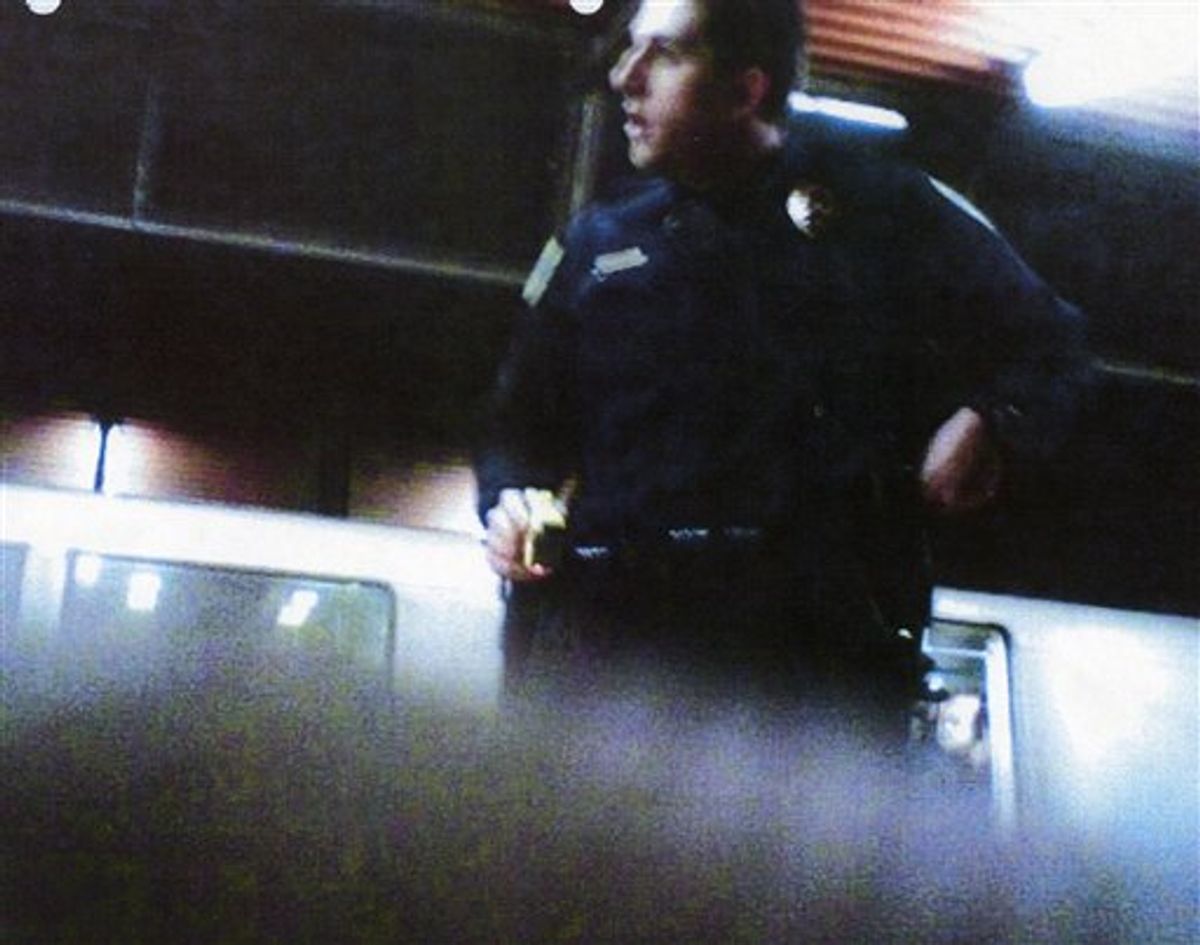 FILE - This cellular telephone image provided by the Los Angeles County Superior Court shows an image taken, according to lawyers, by Oscar Grant, of former San Francisco Bay Area Rapid Transit police officer Johannes Mehserle shortly before Mehserle shot Grant on New Year's Day 2009. Mehserle testified Friday June 25, 2010 that he mistakenly pulled out his pistol instead of a stun gun when he shot and killed an unarmed black man who was lying face down on an Oakland train platform. A jury has reached a verdict in the trial of a former San Francisco Bay area transit officer accused of murdering Grant, an unarmed man on an Oakland train platform. The eight-woman, four-man panel is scheduled to read the verdict on Thursday, July 8, 2010. (AP Photo/ Los Angeles County Superior Court) (AP)
--

A white former transit officer was convicted of involuntary manslaughter Thursday in the shooting death of an unarmed black man on an Oakland train platform in a 2009 encounter that set off days of rioting in the city.

The jury deliberated more than six hours over two days to convict Johannes Mehserle in the killing of 22-year-old Oscar Grant, who was shot to death as he lay face-down.

Mehserle was placed in handcuffs and taken away after the verdict. He turned to his family and mouthed, "I love you, guys."

At least five bystanders videotaped the New Year's Day incident in what was among the most racially polarizing cases in California since four Los Angeles officers were acquitted in 1992 in the beating of Rodney King.

Involuntary manslaughter carries a sentence of two to four years.

Police in Oakland expected protests after the verdict and prepared by getting crowd-control training and working 12-hour shifts. A group of activists planned a rally outside City Hall.

The case was a rare instance in which a police officer stood trial for an on-duty killing and that was captured on video from so many different angles.

The jury had a choice between murder and lesser charges of voluntary and involuntary manslaughter.

The panel included eight women and four men. None listed their race as black. Seven said they were white, three were Latino, and one was Asian-Pacific. One declined to state their race.

The verdict followed a three-week trial in which prosecutors played videos by bystanders, and witnesses recounted hearing the frightening gunshot that killed Grant.

Mehserle, 28, testified that he struggled with Grant and saw him digging in his pocket as officers responded to reports of a fight at a train station. Fearing Grant may have a weapon, Mehserle said he decided to shock Grant with his Taser but pulled his .40-caliber handgun instead.

Alameda County Deputy District Attorney David Stein said in his closing argument that Mehserle let his emotions get the better of him and intended to shoot Grant with the handgun without justification.

One of Grant's friends, Jackie Bryson, testified that Mehserle said "(expletive) this" before firing the fatal shot.

Defense attorney Michael Rains contended the shooting was a tragic accident. Mehserle had no motive to shoot Grant, even though he was resisting arrest, the lawyer argued.

Rains also said Mehserle told a colleague before the shooting: "Tony, Tony, Tony, I can't get his hands. I'm going to tase him."

Mehserle pleaded not guilty to murder and resigned from the Bay Area Rapid Transit agency after the shooting.

Fallout from the shooting was swift in Oakland after the videos were shown on television and the Internet. The shooting and the nearly two weeks it took to arrest Mehserle sent the city into a tailspin of violence as downtown businesses were damaged, cars were set ablaze and clashes erupted between protesters and police.

Grant had recently been released from jail after being sentenced to 16 months for a gun possession charge filed after he ran from police and was subdued by an officer with a stun gun.

Grant has become a martyr of sorts in a city where more than a third of residents are black. His omnipresent image on buildings and storefront windows arguably rivals that of slain hometown rapper Tupac Shakur.

Grant's family and friends filed multimillion dollar lawsuits against the transit agency. Only the mother of Grant's daughter has reached a settlement.