"Predators": Roast the aliens -- and the popcorn! 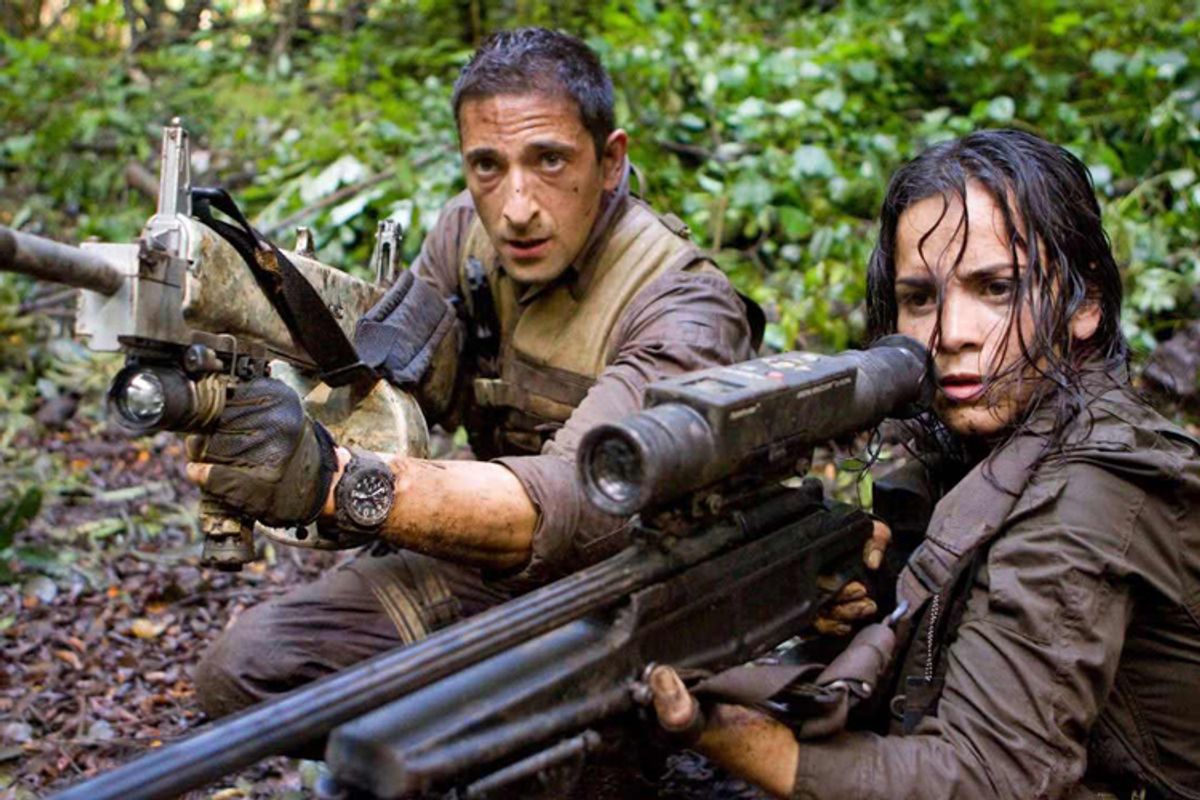 "Predators," the new badass alien-action vehicle produced by Robert Rodriguez and directed by Nimród Antal (who made the Hungarian cult hit "Kontroll" and the intriguing horror flop "Vacancy"), has more than a little blast from the past mixed into its cultural DNA. It deliberately recalls the kinds of movies that used to play at the long-gone and long-forgotten movie palaces of New York's 42nd Street, L.A.'s Main Street and Los Angeles Street, and countless other downtrodden inner-city neighborhoods. (My personal favorite was the Lux, in downtown Oakland, Calif.)

Of course, Rodriguez directed the underappreciated "Planet Terror" half of the underappreciated "Grindhouse" double bill; his entire career has arguably been devoted to reviving the eccentric tradition of grade-B action cinema. For a certain demographic of movie geeks of roughly Rodriguez's generation (which most definitely includes me), his forthcoming and profoundly nuts-seeming new movie, "Machete," will be one of the year's major events. With "Predators" he accomplishes a nifty trifecta: He's relaunching a certain style of mid-budget monster thriller; he's relaunching a venerable but underwhelming horror franchise (strangely, I seem to have missed "AVPR: Aliens vs Predator -- Requiem" from 2007); and he's relaunching the herky-jerk career of Antal, a talented director who doesn't quite fit into any available American niche.

Maybe it's a four-fecta, or whatever the right word would be, since "Predators" also goes a long way toward establishing Adrien Brody as an action star. A year ago that would have sounded like a joke, but Brody needed a fresh start after his post-Oscar career fizzled into terminal indie-ness. He's clearly put in the time at the gym -- dude is way too ripped to sit around playing Schubert for Nazi officers, thank you very much -- and after this movie and "Splice," it sure looks like he's turned his hawklike visage and gravelly speaking voice toward kicking ass and taking names. Since Hollywood has apparently decided Brody isn't pretty enough to be Brad Pitt or Johnny Depp, he's decided: Screw it, I'm becoming Dolph Lundgren instead.

"Predators" hits you with one of those opening scenes that's supposed to mimic a speedball shot into your femoral artery, as Brody -- clad in paramilitary gear and loaded with weapons -- plunges from the sky attached to an airplane suit and an automatic parachute. He doesn't know what happened to him or where he is, except that it's a sweltering, dangerous jungle and all kinds of other guys with guns are dropping around him. We don't learn the name of Brody's character until the movie's last scene, but he's rapidly joined by a cast of miscellaneous rascals: a Russian soldier (Oleg Taktarov), a Tijuana mobster (Danny Trejo), an African militia fighter (Mahershalalhashbaz Ali), a convicted murderer (Walton Goggins), a Japanese yakuza (Louis Ozawa Changchien) and, somewhat mysteriously, a doctor (Topher Grace).

Oh, and a babe, of course. A tough-ass, weapons-expert babe out of the Israeli Defense Forces, mind you (it's Alice Braga), but a babe nonetheless. They're all a bunch of lone-wolf types who'd rather kill each other than change their socks, but within minutes they're set upon by some nasty carnivorous beasties that look like wild boars crossbred with greyhounds, and at about the same time they realize something else important. While they could be in Central America or central Africa or South Asia, just from the terrain, they're not -- unless our planet has acquired a bunch of extra moons and lost its magnetic polarity. Someone or something has abducted them and transported them to an extraterrestrial body, and as Brody's character puts it, "This whole planet is a game preserve -- and we're the game."

Fans of any or all of the earlier "Predator" films don't need any introduction to the dreadlocked, lightning-quick hunters, with their odd, purring speech, their spectral night vision and their cloaking armor. Antal and screenwriters Alex Litvak and Michael Finch do a nice job of building on what fans will already know about this sinister alien species, who resemble flesh-eating, 7-foot-tall reggae musicians. We visit the Predators' hunting camp, which suggests "Apocalypse Now" and "The Island of Dr. Moreau" by way of "The Texas Chain Saw Massacre," and meet an isolated human survivor (Laurence Fishburne) who has successfully outwitted the aliens and gone native, Mistah Kurtz style.

You don't really need or want a plot summary of this movie, do you? Let's see: The hunter becomes the hunted, unlikely alliances are made and then broken, the Mexican and the black guy die first. (Rodriguez is a stickler for convention, I guess.) Oh, yeah, and that totally normal-seeming non-badass doctor? The Topher Grace character? He is there for a reason. There's a whole lot of shooting and yelling and blowing shit up, and through it all Brody growls out his lines with an implacable, mean-spirited tough-guy demeanor.

Sure, many of the plot's most intriguing elements get squandered in favor of a series of increasingly conventional chase-and-fight sequences. But what do you expect? There's a grimy, satisfying popcorn passion about "Predators" that seems positively joyous in a season -- hell, an entire era -- of overcooked and empty CGI spectacles. If you think this kind of movie is trash, fine. Don't see it. At least it's trash made by and for human beings.