The famous mom says kids should be allowed to wear whatever they want -- but is that really a good idea? 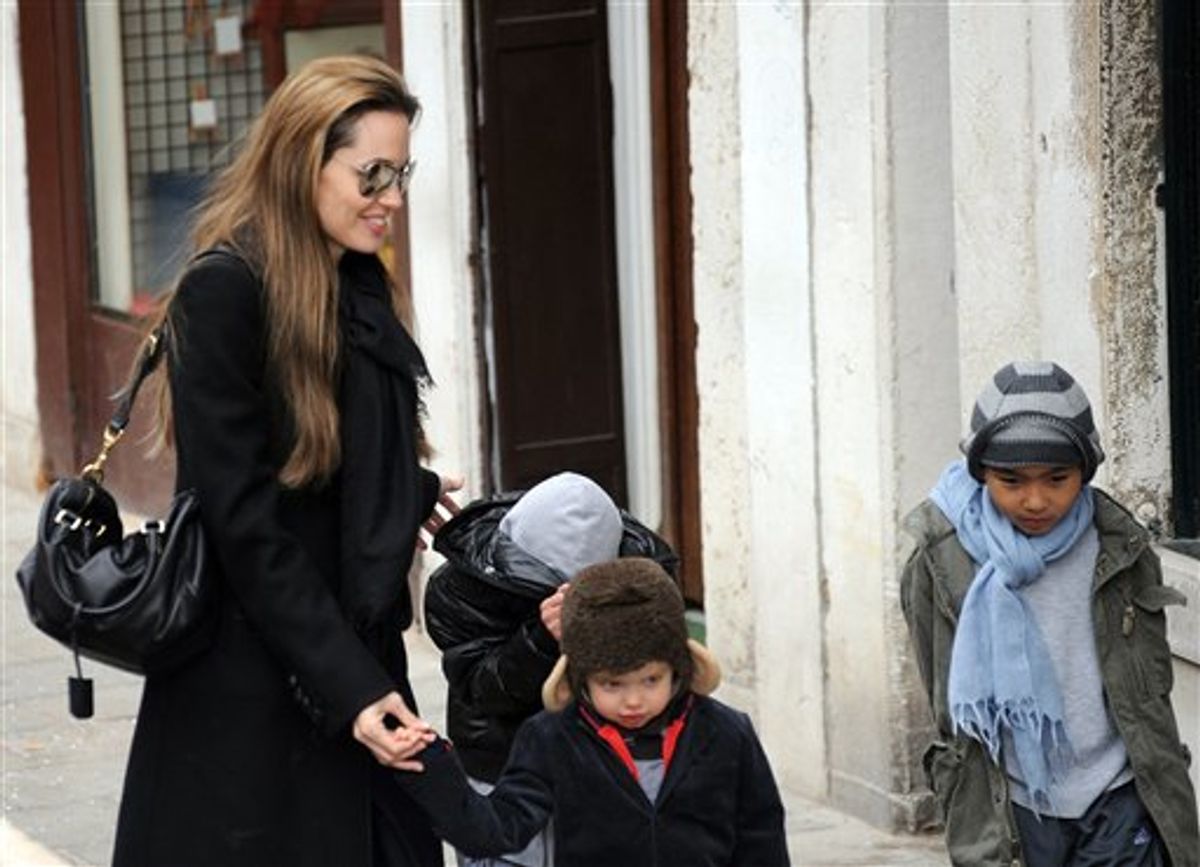 Ever since establishing herself as America's littlest gender warrior, Angelina Jolie and Brad Pit's 4-year-old daughter, Shiloh, has come under intense scrutiny -- and a boatload of criticism -- for her boundary-pushing tomboy style. Nothing flouts sexual convention like a little girl in pants! Yet through all the media hand-wringing over "cross dressing," Shiloh's movie star mother has been her most steadfast supporter. Last month, Angelina Jolie matter-of-factly told Vanity Fair that yes, her kid "dresses like a little dude." Over the weekend, in an interview for Reuters, she went further, explaining, "I think she is fascinating, the choices she is making. And I would never be the kind of parent to force somebody to be something they are not. I think that is just bad parenting."

My own loosely defined household rule of thumb is that as long as it doesn't hurt you or impose upon anybody else, it's probably OK. I die a little inside when my 6-year-old drags her ripped, filthy favorite pair of pants out of the laundry pile and begs to wear them one more day, but I don't want her appearance to be a reflection of my own ego. And if she feels magically happier and more confident in those pants, what's another day in them to me? But what if I were, like a colleague's family, figuring out what to do with a little boy who wants to wear a dress to school? Is it in the child's best interest to attire him more traditionally, or to let him wear what he wants, knowing the teasing and misunderstanding to which he'll be subjected? Or what about the kid who refuses to wash her increasingly stinky hair?  At what point does your or my kids' "expressing themselves" become a problem, or just a big pain in the ass for everybody else?

Because the weird thing is, if you live in places where parenting is considered a competitive sport, you can see plenty of parents whose egos are firmly attached to just how weird and unconventional their offspring are. Oh, look at little Maisie and Buckminster! We just can't get them in anything but their tutus! Because they're so transgressive. I used to know a family that prided itself on having never said no to their son. "We don't want to limit him," the dad explained. Boy, is that kid in for it when he starts dating. And if you think being judgmental is just for stick-in-the-muds, try telling your daughter to put her underpants back on in front of a pack of bourgeois bohemians.

If Shiloh Jolie-Pitt prefers track suits to froufrou dresses, good for her. And if a preschool pixie haircut could make you gay, there'd be no straight women left in America. But expressing oneself isn't always such a no-brainer, even for little children. You still have to say please and thank you and not wear your ski jacket when it's a hundred degrees out, because Mom doesn't feel like a trip to the emergency room today. Maybe that's cramping your style, but go express yourself in a less heat stroke-inducing way.

In her Reuters interview, Jolie noted sagely that, "Society always has something to learn when it comes to the way we judge each other, label each other. We have far to go." But we're not there yet. Not that my kids are completely wild animals, but sometimes when faced with a parenting dilemma, I consider the words of dog whisperer Cesar Milan, who reminds us that discipline is an expression of love, too. So sometimes my little one wears the ripped dirty pants for the fourth day in a row and she's happy. And sometimes I tell her they're in the wash and she has to pick something else. And usually, she's happy anyway.