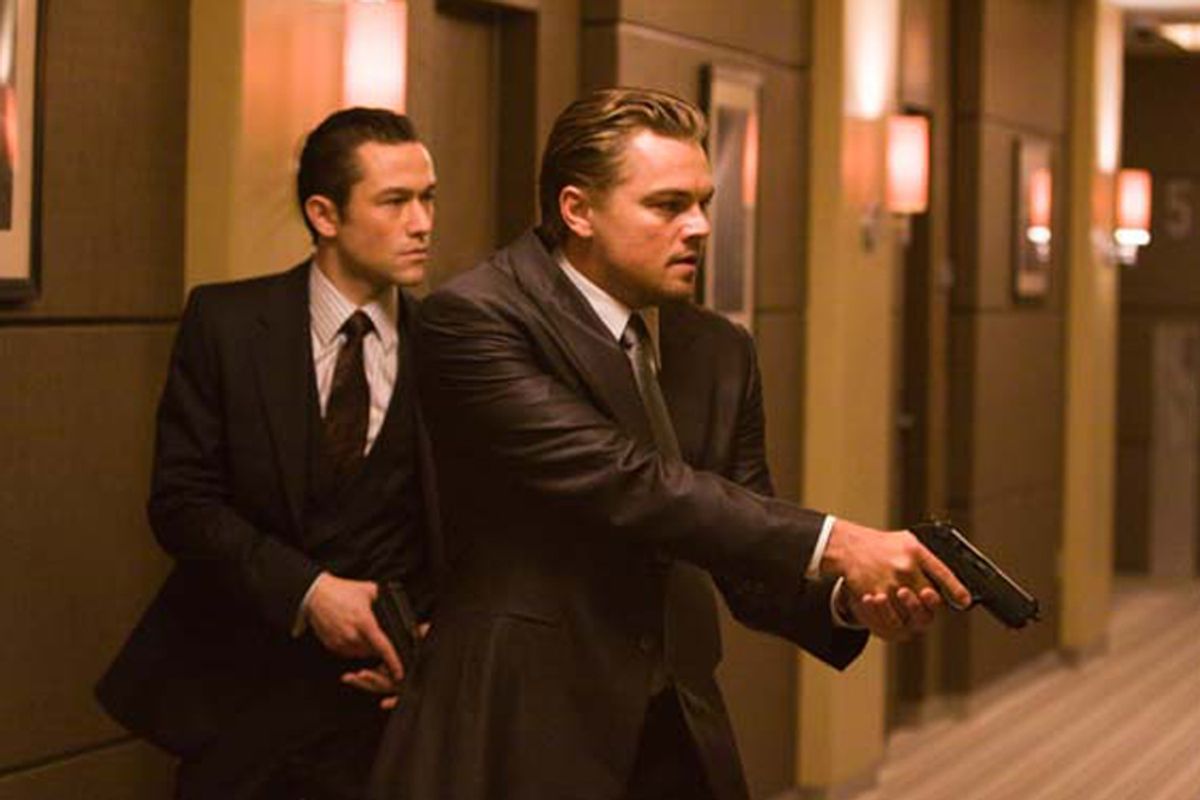 Director Christopher Nolan is such a master movie technician -- a combination of engineer, architect, game designer and God -- that it's startling to realize how constricted his vision is and how clumsily he tells stories. "Inception," Nolan's first film since his mega-googolplex hit with "The Dark Knight," and his first as a solo writer-director since the now-legendary puzzler "Memento" in 2000, is supposed to be a dreamscape movie. At one point, in fact, we travel with its central Scooby-gang of characters into a dream within a dream within a dream, and then into some deeper, still more unconscious, psychological limbo-state below that.

Managing all these nested levels of narrative is a marvelously nerdy accomplishment, no doubt -- but this is the most tight-assed vision of the innermost human psyche I've ever seen. While Nolan's images are visually impressive and powered by state-of-the-art digital effects and accomplished stunt work, they're always ordered and organized with anal precision. They don't look or feel anything like dreams. (Or, at least, not like my dreams.) They look instead like mediocre action films from the '90s, or in the case of the supremely boring ski-patrol vs. Arctic fortress shootout found on Level Three, like the Alistair MacLean adaptation "Ice Station Zebra" from 1968. (With Rock Hudson! And Ernest Borgnine!) "Inception" may have been directed by Christopher Nolan, but Nolan's dreams are apparently directed by Michael Bay.

OK, I know -- you want me to back off the high-minded analysis and tell you whether "Inception" is a good destination for those summer moviegoing dollars eager to leap out of your wallet. Sure, I guess so. It's a cool-looking action movie, carefully constructed and edited, that uses all kinds of nifty locations and a lot of portentous-sounding expositional yammering. It inhabits a Philip K. Dick-style universe of psychological warfare that suggests "The Matrix," "Total Recall" and "Minority Report" -- all of them, by the way, better movies -- but it's fairer to call "Inception" a maze movie or a labyrinth movie than a puzzle movie. Because, as the wisecracking fellow critic sitting next to me observed, every time the story gets puzzling the characters call a timeout and explain it.

So, yeah, if you approach "Inception" with lowered expectations it's a pretty good time. Problem is, there are no lowered expectations around Christopher Nolan, whose adherents have proclaimed him as the heir to Kubrick and Hitchcock and declared "Inception" a masterpiece. I don't want to get sidetracked here, but let me suggest that the comparisons aren't entirely misguided. They're just not helpful. Nolan has inherited some of Kubrick and Hitchcock's worst tendencies, most notably their defensive, compulsive inclination to work everything out about their stories and characters to the last detail, as if human beings and the world were algebraic or geometrical phenomena requiring a solution.

But the mysterious power of Hitchcock's "Vertigo" cannot be explained by the ludicrous official story revealed in the final act -- indeed, it nearly scotches the whole movie -- and the attack of "The Birds" is never explained. As Kubrick's career progressed he was increasingly drawn to stories that defied or challenged rational analysis, like "2001: A Space Odyssey" or "The Shining." (I think I'd put "Full Metal Jacket" and "Eyes Wide Shut" in that category too, but let's discuss some other time.) Nolan seems to have learned exactly the wrong lessons from these mentors. For all the complexity, craftsmanship and color of "Inception," it's yet another of his ultra-serious schematic constructions with no soul, no sex and almost no joy, all about some tormented dude struggling with his ill-managed Freudian demons. That same guy sitting next to me cracked that Nolan needs to stop seeing a therapist; there's not nearly enough sublimation in his movies.

At least Nolan hasn't cast frequent collaborator Christian Bale on this occasion (they'll presumably be reunited on the next Batman movie), but he's only traveled as far as go-to tormented dude Leonardo DiCaprio, last seen as the psychiatry-textbook protagonist of Martin Scorsese's "Shutter Island." DiCaprio's only 35, but he's become a vastly different actor in his post-pretty-boy phase, and always seems to play guys who have a dead wife, a sweat-gland malfunction and a really urgent need to find the toilet. In "Inception" that would be Cobb, a dream-state spy or "extractor" who earns big bucks by entering and manipulating people's dreams to drag out their most closely held secrets.

Nolan throws us into the deep water right away, and in many ways the dazzling first quarter-hour of "Inception" is the best part. There are no opening credits. In the first couple of shots, Cobb washes up on a beach, possibly in Japan, and is dragged into a luxurious house for an audience with an aging yakuza gangster. No, wait -- now Saito (Ken Watanabe), the gangster, is much younger. Cobb and his sharp-dressed partner, Arthur (Joseph Gordon-Levitt), who seems to have materialized out of nowhere, offer to train him to protect himself from dream raiders. No, wait -- this is Saito's dream, and Cobb and Arthur have set a trap for him. Unless he's also setting a trap for them! But who's the sultry foreign bombshell (Marion Cotillard) who aligns herself with Saito against Cobb, and doesn't really seem to belong here?

After that setting dissolves into a chaotic shootout, all these people (or most of them) wake up in a modest apartment somewhere in Asia or the Middle East -- Iran? Pakistan? the West Bank? -- where an angry mob is closing in outside. Saito isn't pleased; he was auditioning Cobb and Arthur for a difficult espionage job, and they failed. No, wait -- maybe they didn't. How and when can the dreamer be absolutely sure he has woken up?

So the themes, ideas and characters of "Inception" are all introduced with brilliant economy, along with its moral and philosophical universe. And then Nolan proceeds to hammer them relentlessly into the ground with an increasingly clumsy, clunky plot and an allegedly profound mystery that just sort of fizzles out into what-if-this-world-isn't-real sophomoric musing.

Cobb and Arthur are gray-market or black-market entrepreneurs, and Cobb has warrants hanging over his head that keep him from going home to his kids in the United States. (I'll say no more about that.) His dead wife, Mal (Cotillard), only visits him in dreams -- his own and other people's, even though that's not really supposed to happen -- and doesn't act all that friendly. Let's just say that as obvious names for ominous female characters go, that one pretty nearly takes the cake. You didn't want to call her Fatale, Chris? Or Eve L. DeMenta B. Yotch?

These guys are experts at extracting stuff from people's minds, but Saito wants them to do something more difficult: "Inception," where an idea will be planted in someone's mind so deeply that he'll believe he thought of it himself. (This is supposed to be so hard, someone explains, because the brain can always track ideas back to their source. Take that, Joseph Goebbels and Fox News! You only think it's working!) The subject is a youthful energy tycoon named Fischer (Cillian Murphy), who must be persuaded to break up his dying father's superpower-scale corporation because that'll be a good thing for the planet. For once I am not being snarky; that is the stated reason.

So Cobb and Arthur have to round up the team of globetrotting rapscallions always demanded by a movie like this: College-girl genius Ariadne (Ellen Page) as the "architect" who designs the dream worlds; chemist Yusuf (Dileep Rao) to administer the designer sedatives; shape-shifter Eames (British actor Tom Hardy, always a delight) to act out key roles inside Fischer's mind. It's basically "Mission: Impossible II" minus Tom Cruise and John Woo, plus "Ocean's Eleven" minus a sense of humor and Las Vegas, plus "A Nightmare on Elm Street 3: Dream Warriors," with Marion Cotillard standing in for Freddy Krueger. Except that I just made it sound a whole lot more fun than it really is.

Nolan is completely uninterested in the plot superstructure involving Saito and Fischer, which never amounts to anything and holds no surprises. He is, of course, supremely invested in the details of the three (or four) levels of dream narrative into which our terrorist heroes drag Fischer. Drugging him in awkward and implausible fashion on a Sydney-to-Los Angeles flight, they first pull him into a noir-ish kidnapping drama in a gray, rain-swept city, before all going to sleep again and waking up in a corporate-espionage yarn set in a luxury hotel, where they snooze down another level to the aforementioned Arctic Circle shootout, which could be in one of the Roger Moore Bond movies or an abandoned Cold War drama with Sylvester Stallone. ("No man's ever broken out of the Soviet Union's super-secret Northern Fortress. But one man's going to break IN.")

All of this involves a bunch of big-ass guys shooting at each other with automatic weapons, which has to be the most arid and depressing depiction of the dream state I've ever encountered. There are no surreal images or nonsense dialogue, no illogical shifts of scene from the first-grade classroom to Mom's kitchen to a whorehouse. It's all meticulously, ass-clenchingly worked out: One person has to stay awake at each level to retrieve the others from the mind-melting waters of Lethe, and time passes more slowly as the dreamers go deeper. If there's one thing that dream-state movies need more of, it's math, and genderless geek-girl Ariadne is all over it: "That means 10 seconds before the van hits the water! That's three minutes for Arthur in the hotel -- and 16 minutes for us!" (I made up that particular line, but it's representative.)

Sometimes Nolan's technical expertise produces its own kind of beauty, as in a startling zero-gravity scene in the hotel corridors when the laws of physics apparently rebel on Level Two. But for the most part "Inception" is a handsome, clever and grindingly self-serious boy-movie, shorn of imagination, libido, spirituality or emotional depth. Nolan establishes a fascinating world, loaded with trapdoors, symbols and hidden secrets, and then squanders the opportunity on an overpriced "Twilight Zone" episode. He casts Cotillard, one of the foxiest actresses alive, as a smoldering temptress who embodies all the female, erotic energy absent from this universe, and then literally locks her in the basement. Mal yearns to escape and get her claws into these constipated, narcoleptic boys (and maybe into Page's prim androgyne as well), and this movie would be a hell of a lot better if she did. But she's a girl -- no, she's a woman -- and even in dreams it's too dangerous to let those run around loose.