"The Fall of the House of Walworth": A Gilded Age murder 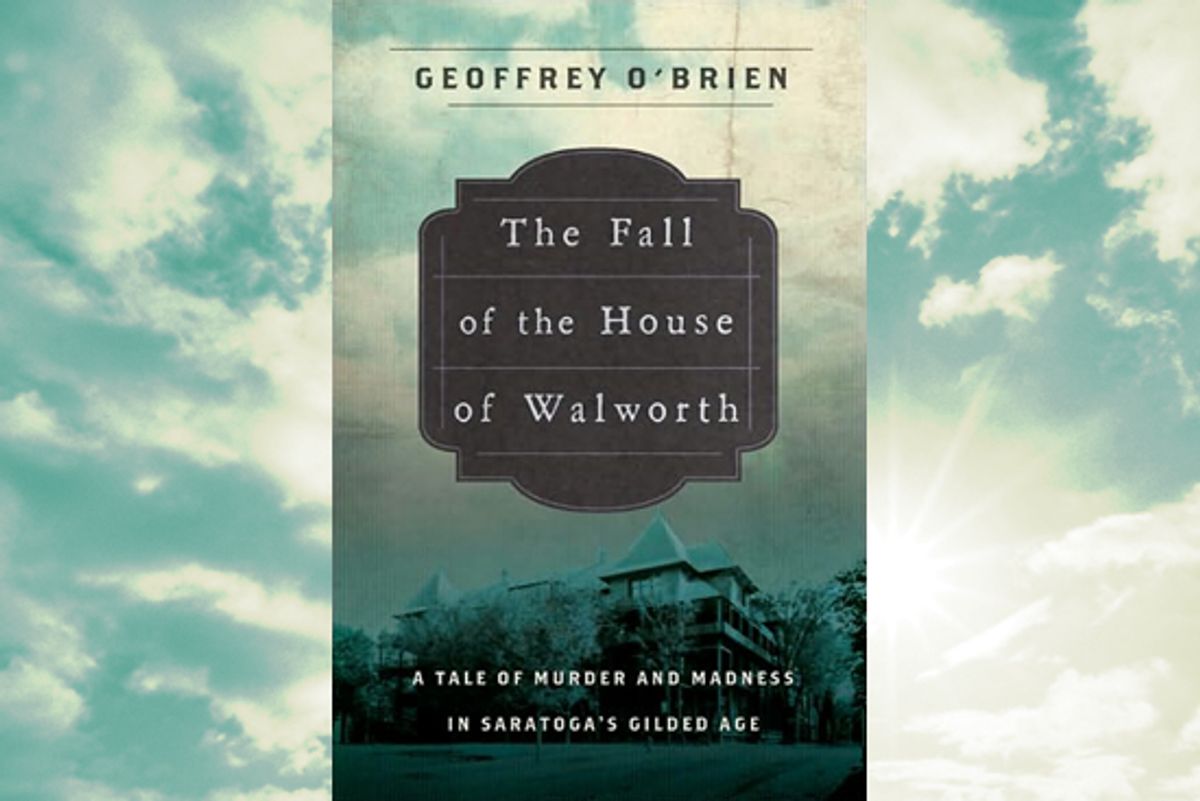 When someone says that a work of narrative history reads like a novel, they almost always mean that the facts are lined up and marched in tight, chronological formation after the fashion of an airport thriller. Geoffrey O'Brien's "The Fall of the House of Walworth: A Tale of Madness and Murder in Gilded Age America" does indeed read like a novel, but not that kind. Instead, this true crime story is part Victorian family saga, part creepy gothic, full of haunted people drifting through rooms filled with dark, oversize furniture as immobile and dominating as the past they can neither revive nor escape.

O'Brien's title deliberately echoes Edgar Allan Poe's tale of aristocratic degeneration,"The Fall of the House of Usher" -- fittingly enough, since both the real-life victim and the perpetrator of the murder at the center of this story counted Poe among their favorite authors. It also resembles "The Magnificent Ambersons": if not the novel by Booth Tarkington (which I haven't read), then definitely Orson Welles' great, butchered film based on it. While it's the story of a homicide, it's also an account of how a once-great American family fell from vitality into decay even as the pastoral nation they helped to build was transformed into an industrialized dynamo.

The Walworths were an old New York State clan who traced their ancestors back to a lord mayor of London, specifically, the one who killed Wat Tyler, leader of the peasant revolt of 1381. The first American Walworth came to this country in 1680 and the family reached its pinnacle with Reuben Hyde Walworth, the last man to hold the position of chancellor of New York state. The chancellor was a magistrate who essentially ran the state's legal system; Reuben preferred to do this from the parlor of his large house in the spa town of Saratoga Springs. That he was able to do so, O'Brien writes, perfectly illustrates the "coziness" of his position.

So it was a shock when Mansfield, son of the late, esteemed chancellor, was shot dead in a New York City hotel room in 1873. Even more shocking was the fact that Mansfield's own son, Frank, had pulled the trigger. Then, as now, the media seized on sensational trials with relish, denouncing Frank as the perpetrator of a crime -- parricide -- considered exotically barbaric, the stuff of Greek myth. It was, the Brooklyn Eagle announced, "the blackest deed of modern times," committed by the scion of a once impeccably respectable and well-connected New York dynasty. Inflaming the scandal was the much-remarked "coolness" of the culprit, whose "utmost calm" and dandified appearance made him an emblem of heartless, fashionable youth. The New York Herald saw in Frank Walworth "a depth of depravity that we shudder to contemplate ... A nameless horror takes possession of the mind."

O'Brien, a noted critic and editor in chief of the Library of America, might be expected to fill "The Fall of the House of Walworth" with explanations and context, spelling out for his readers what the events he describes signified in the rapidly changing world of late 19th-century America and suggesting parallels in the present day. Rather daringly, he refrains from this, providing only the minimum of background information required to make the story intelligible. His readers are left to draw their own conclusions and meanings from the story of the Walworths and their fall, which is what really makes this book like a novel.

It's those evocative empty spaces, where O'Brien invites us to speculate on such mysteries as the possible vein of insanity running through the Walworth line, that give this book its remarkable eeriness. Like Frank's daughter, Clara, the last of the Walworths, sequestered in the clan's half-derelict Saratoga mansion in the book's opening sentences, we, too, are permitted to roam these forsaken rooms on our own recognizance.

O'Brien was fortunate: The Walworths were prodigious writers -- of letters, journals, poetry, monographs and, yes, novels. He enjoyed exceptional access to their inner lives, thanks to an archive in Saratoga that allowed him to study "these individuals from many angles and at times with great intimacy."

Mansfield, the victim, was a tragicomic figure, the author of what one contemporary observer characterized as "dish-water little novels": overwritten potboilers full, according to O'Brien, of "moaning winds and impenetrable gloom, bells tolling at midnight, ominously deserted metropolitan streets, cells in which unnamed prisoners were brutally punished." Each of these books featured "the same essential self-portrait: the protagonist was always an isolated hero of rare genius and moral worth whose qualities had gone somehow unappreciated by those around him." Once, when Mansfield wrote of a mistreated younger brother who discovers "the key to the buried gold of lost Atlantis" hidden in a portrait and ventures into Kentucky's Mammoth Caves to find it, he achieved a modest popular hit.

Nevertheless, Mansfield Walworth seems to have been bad nearly from birth; even Frank's harshest critics acknowledged that the father was, in the words of the Sun newspaper, "savage, sottish and licentious." The son's motive was to protect his mother, from whom his father had separated but to whom Mansfield still sent letters overflowing with profane curses and mortal threats. He would kill her, both of her sons and her brother, he swore. He had already beaten her in the past, on one occasion nearly biting off her finger. Mansfield also ran up debts on an anticipated inheritance his father knew better than to leave to him and was briefly arrested on a charge of suspected treason during the Civil War.

Veering from the appalling to the pitiful to the ridiculous, Mansfield is a fantastic character, as is Ellen, his wife -- also his stepsister. The two fell in love after his widowed father married her widowed mother and while the two young people were under the sway of Mansfield's brother, a charismatic Roman Catholic priest. (O'Brien traces a thread of religious mania through the generations of Walworths.) To rebel against the starchy Yankee Presbyterianism of the chancellor and his forebears, Mansfield and Ellen embraced an extravagant Romantic emotionalism. Mansfield never ceased to regard himself as a persecuted Byronic figure, but Ellen soon learned better.

In the later sections of the book, O'Brien seems understandably impressed with Ellen, who blossomed into a woman of great energy, discipline and initiative after her husband's death. She became a historian, an activist (for historical preservation) and the first woman elected to the Saratoga school board. She studied law, ran a boarding school, co-founded the Daughters of the American Revolution and was appointed director of the Women's National War Relief Association during the Spanish-American War. Yet she constantly struggled against the dead weight of her children, almost all of whom seemed to carry some version of the Walworth curse: Frank never recovered from his ordeal, one daughter joined an austere, fanatical convent and her youngest son became a hermit living in a "hut" in the forests of Virginia before cutting his own throat.

Perhaps it's for the best that they finally died out, yet O'Brien's book makes their decline so moodily diverting that I decided to check out the Walworth Mansion the next time I'm in the Saratoga area. Alas, as the final two sentences of "The Fall of the House of Walworth" explain, "It was demolished in 1955. A gas station occupies the site today."

Books Crime History Our Picks What To Read