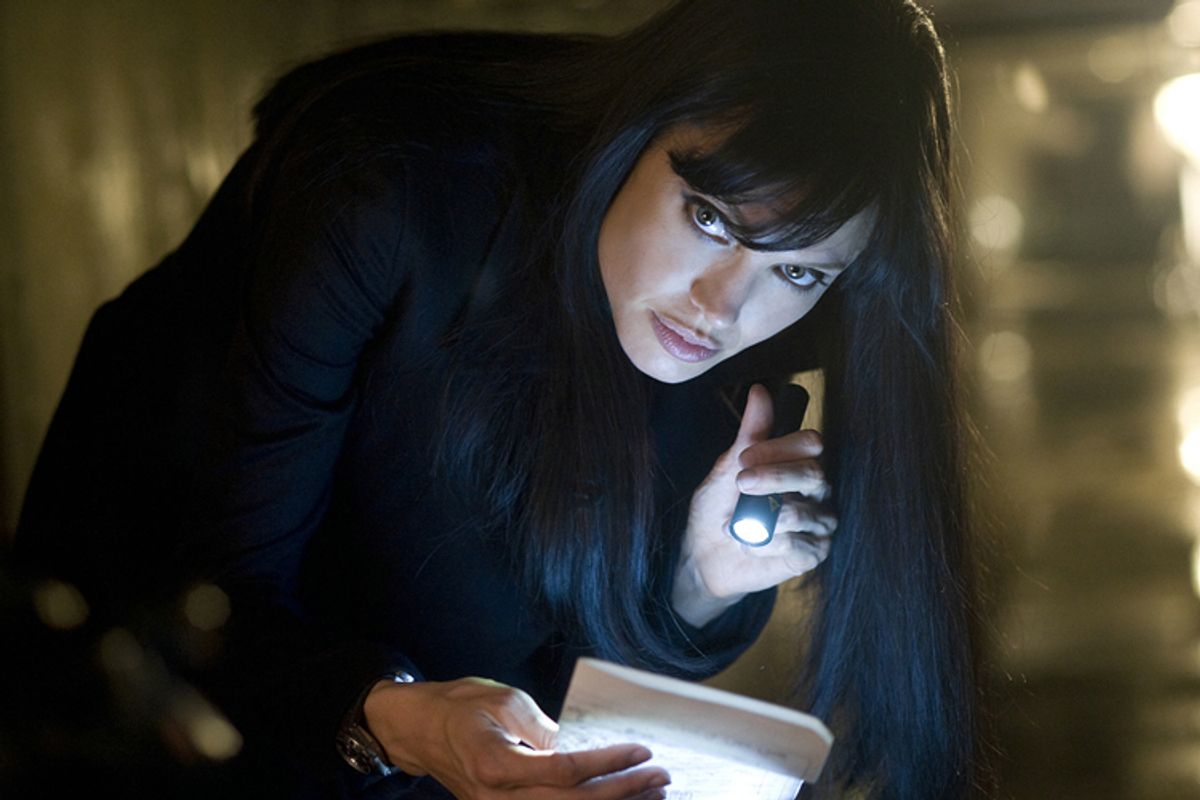 "Salt" is a well-greased, smoothly functioning machine that drives forward with tremendous momentum, elevating your pulse rate and relieving you of the need to think for more than a second or two at a stretch. Now, am I talking about "Salt" the spy thriller, directed by the capable genre veteran Phillip Noyce? Or am I talking about Evelyn Salt, the renegade CIA agent played by Angelina Jolie, who must shed her Manolos and sex-bomb designer suit to become an unstoppable force of pistol-packing vengeance? Well, the wonder of this would-be summer action hit, which manages the neat trick of being slippery and deceptive without possessing the least intellectual ambition, is that the description fits both flavors of Salt.

Among the questions one might ask oneself, if "Salt" ever slowed down after its early triggering incident — when a Russian defector denounces Evelyn as a Soviet sleeper spy, planted in the United States as a child — is whether this return to action stardom suits Jolie or not. Mostly, it does: Her feline grace and imperturbable demeanor equip her well for physical roles that feature minimal introspection, and I continue to believe that the cheesecake Lara Croft films capture Jolie at her funniest and most confident (as well as, yes, her maximum pulchritude). I'm certainly relieved not to watch her fruitlessly chasing Oscar gold in dull, earnest, mid-budget outings like "Changeling" or "A Mighty Heart."

There's another side to that equation, though, beginning with the much-publicized fact that Kurt Wimmer's screenplay was written with a male star in mind, very likely Tom Cruise. (Indeed, "Salt" is conceptually pretty close to Cruise's underperforming summer release, "Knight and Day.") Very little of the script was rewritten when Jolie was cast — an intriguing move toward Hollywood gender equality, blah blah blah. But that also means Jolie is stuck in a Tom Cruise role, playing a character who seems borderline nuts, who exhibits no sexuality and hardly any psychological life, and whose personal history consists of plot points with no emotional impact.

Another question I didn't ask myself about "Salt" until the next morning is whether its warmed-over Cold War game-playing paranoia represents an intriguing twist on an antique formula or just the ideological bankruptcy and collective brain-vacuum of Hollywood. Wimmer's screenplay is a clever concoction, no doubt. He's taken elements of "The Manchurian Candidate" and "Dr. Strangelove" and smushed them together in Jack Bauer's high-tech, amoral universe, so that the story feels old and new, classic and contemporary, at the same time. Stick a blue headband on Angie, and this movie's a wedding dress. This is also a highly streamlined script, in which we never get that scene where some second-string character delivers a monologue explaining the story. Given the convoluted and nonsensical story of "Salt," that was a wise choice.

Fortunately for those of us in the viewing audience, Aussie director Noyce is an old hand at this sort of thing, with a thriller career reaching back to "Patriot Games" and "Clear and Present Danger" in the early '90s. He also directed Jolie in her first major Hollywood role, opposite Denzel Washington in the serial-killer drama "The Bone Collector." (Noyce buffs: Have you seen "Blind Fury," his ludicrous 1989 American remodel of the "Zatoichi the Blind Swordsman" series? It stars Rutger Hauer, of course, and the tag line is: "He may be blind. But he don't need no dog.")

Noyce is one of those mainstream filmmakers little noticed by the public but well loved by critics, and the reason is simple: In an age of self-inflated, portentous moviemaking, he tells stories in fluid and exciting fashion without wasting anybody's damn time. We begin with disturbing, unexplained images of Jolie-as-Salt being brutally interrogated in a North Korean prison cell — this is the only time we see her undressed, as she's getting the crap beaten out of her — and we're pretty much off to the races. What the hell's going on? Is she a spy or isn't she? What was she doing in North Korea, and what happened during her interrogation? These are exactly the right questions, which is not to say they'll ever be answered.

She's swapped at the border for a North Korean agent and goes back to work at her desk at a CIA-front company in suburban Washington, until the day when an aging Russian defector named Orlov (Daniel Olbrychski) shows up just as she's heading home for an anniversary dinner with Mike (August Diehl), her German arachnologist husband. Wait — he's German? He's an arachno-what? Do those things matter? Stay tuned. Salt and her closest agency buddy, Ted Winter (Liev Schreiber), take on the initial interrogation of Orlov, who's retailing an ancient and long-debunked Cold War legend. He says he knows about a secret Soviet program to place indoctrinated baby-spies in American families, sleeper agents set to come alive decades later, like little Commie moth larvae, and munch the fabric of freedom from within.

Tell these tall tales to my colleagues, Evelyn says. Hubby's waiting for me at home and the pinot grigio's getting warm. OK, says Orlov, but I know the name of a double agent who's about to launch a daring assassination attempt in New York. She's called Evelyn Salt. "My name is Evelyn Salt," she says blankly. "Then you are a Russian spy," says Orlov.

No, these really aren't spoilers — we're still in the first 10 minutes of the film! Suffice it to say that Evelyn's not going to make that anniversary dinner. Armed only with what she's wearing and what she can gather from her secret personal stashes of impressive CIA gadgetry, Evelyn's got to slip free of 35 impossible situations in the next half hour, like a slippery combination of the Road Runner and a bar of soap in the shower. She kicks a whole lot of beefy-dude ass, and Noyce's clear, measured action sequences are a joy to behold. She sheds her blond professional do for a black wig, thereby looking a lot more like Angelina Jolie. She uses a pair of panties and fire-extinguisher goo to block out security cameras. She climbs in a window and helps a little black girl with her homework. She steals a biker chick's leather jacket. rides the BoltBus to New York and checks into a hotel — wait a minute, goddammit! Why is she doing exactly what Orlov said she would?

That would be telling. You may or may not figure out what Salt is up to, but Noyce and Wimmer do a superlative job of keeping even the more ridiculous plot possibilities in play, and there's at least one major plot twist (and probably two) you won't see coming. I'd have to see the movie again to decide how many clues are visible early on, but I will say that even if "Salt" has nowhere near the narrative density of "Inception," it's probably superior purely as a keep-'em-guessing game. Let's just say that Evelyn is leading Schreiber's Winter, who still says she may be innocent, and counterintelligence specialist Peabody (Chiwetel Ejiofor), who's trying to kill her, on a cleverly calculated chase. And that she may not be too surprised that they all end up in that secret bunker six floors beneath the White House, where a bluff, Republican-looking president (Hunt Block) considers whether to launch World Wars III, IV and V.

This is a daring, audacious and sometimes terrifying movie — purely as a thrill ride, it's probably the summer's best offering so far. That doesn't mean it left me feeling entirely satisfied. There's an emptiness at the soul of "Salt" — again, meaning both the movie and the character — that's extremely disturbing, maybe on purpose. Just as the story tries to reignite our fears of undead Commie hobgoblins, its star — an actress who usually plays on both our prurient interest and our sympathy — plays a woman whose public and private lives are entirely built on lies, and who seems to have no self at all. She's unstoppable, she's ferocious, she's going to fulfill her mysterious mission at all costs. But she's not particularly likable, or sexy, or even human.